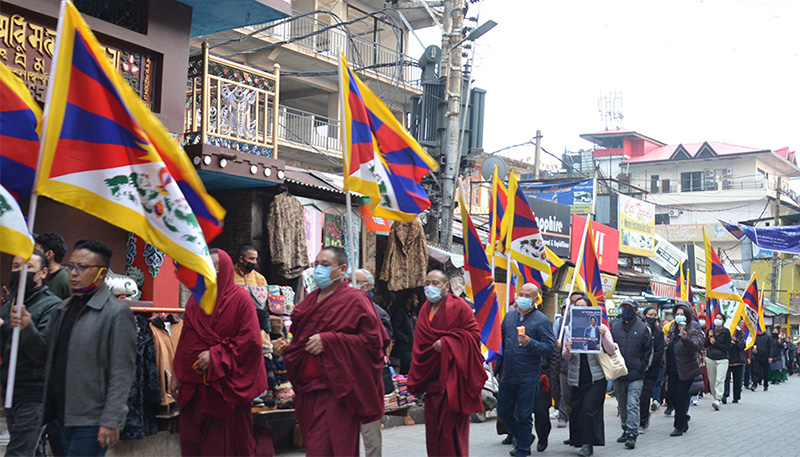 Dharamshala, India — In Tibet, religion is closely linked to its deep and rich culture. Forced into exile due to the Chinese invasion of Tibet in 1959, the Tibetan people hold onto their faith for peace and survival of their culture. Tibetan Buddhism thus reflects the spiritual and intellectual ideas of the Tibetan people and serves as an inevitable part of their lives.

As I got a chance to converse with a Tibetan Monk, Geshe Tsering Choephel, who spoke about his life in the monastery and his escape to India, I began to research the life of Tibetan monks and nuns. What I discovered next was a life of service, compassion, and a strong desire to reclaim lost land.

“Actually, I was born in Tibet. I escaped to India in 1992,” began Geshe Choephel, his opening words serving as a reminder of the impact the Chinese invasion had on Tibetan lives.

The Geshe, who is a resident of Drepung Gomang Monastery in Karnataka, spoke to me about the daily life of Tibetan monks and his life after his escape to India.

‘Geshe’(and Geshema) is a Tibetan Buddhist academic degree, equivalent to a master’s degree for monks and nuns, primarily within the Gelugpa lineage. The Drepung Gomang monastery comes under the Gelugpa school of Tibetan Buddhism, founded in the late 14th century by Je Tsongkhapa (1357-1419). It is also the youngest monastic school. Nyingmapa, Kagyupa, Sakyapa, and Gelugpa make up the 4 main schools of Tibetan Buddhism. They all follow the core beliefs of Buddha Sakyamuni's Four Noble Truths and other teachings.

“I was 22 when I decided to come here. Chinese Authorities began destroying monasteries near where I lived in Tibet and several teachers I knew were killed. More than 6000 monasteries were destroyed in Tibet. I was interested in learning Tibetan Buddhist philosophy, That’s when I was told about the monasteries in Dharamshala,” he said, recounting his traumatic youth when he decided to escape to India to study.

“I walked for about a month, with 10 other people from Tibet through the Himalayas to India,” he added. When asked about the whereabouts of the people who accompanied him, he said he was not aware.

Geshe Choephel, who was also a teacher in the Namgyal Monastery for 12 years, talked about daily life in a monastic school.

After the morning call, the morning prayer lasts for about 2-3 hours during which hundreds of monks have butter tea while chanting Buddhist mantras. Students also participate in Debate to test their knowledge of Buddhist teaching.

The afternoon prayers are conducted in smaller places in the monastery. At night, the monks return to their dorms for their daily practice, reading and memorization of concepts before bed.

After the COVID-19 pandemic hit in 2020, most group gatherings were stopped. “There were no class, no group prayer, and no debate. It has been closed for more than a year now,” said Geshe Choephel when asked about the situational changes due to the pandemic.

On July 6, His Holiness the Dalai Lama celebrated his 86th Birthday. Usually celebrated with great grandeur, 2021 saw no festivities due to the impact of the pandemic.

On being asked about the arrest of Tibetan monks in Tibet by China and the curtailment of freedom of religion, he spoke about the strict laws imposed on Tibetans. “Even keeping a photo of His Holiness the Dalai Lama can get you arrested,” he explained.

Chinese authorities often arrest Tibetans for possession of books about the Dalai Lama’s teachings, his photos, and even sharing his teachings on mobile phones is strictly banned.

Monasteries and Nunneries in Chinese occupied Tibet are kept under tight surveillance and are overseen by government-appointed “Democratic Management Groups.”

The suppression of religious freedom by Chinese Authorities has led to protests and resistance by monks and nuns, often leading to their arrest and torture.

With the impending threat to their cultural and religious identity, religion is given utmost importance to ensure its survival. A culture that reflects in their monasteries, souvenir shops, markets, restaurants, and hotels, Tibetans have learned to make India their home. However, they yearn for a land they can rightfully call their own.