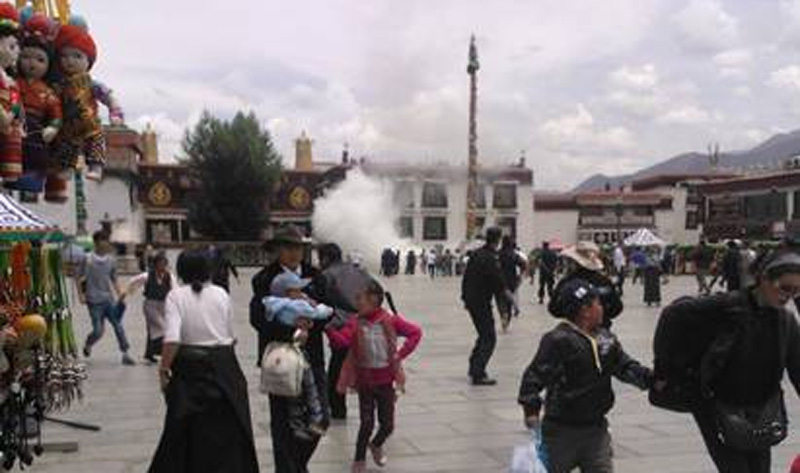 Dharamshala: This article is based on an actual reporting of a recent self-immolation in Lhasa, Tibet.

On the 27th of May, 2012, Kevin Chang, A Taiwanese national visiting Lhasa on vacation, witnessed first-hand the self-immolation of two young Tibetan men, 19 year old Dorjee Tseten who died from his injuries, and another man named, 25 year old Dargye, who, according to media sources, is thought to have survived.

Mr Chang was buying souvenirs in the city near Jokhang temple when he said he heard screams coming from a busy side street in the heart of the city named Pargor Street.  Many people were running away in the opposition direction towards the main plaza in the city centre, he reported, away from the self-immolations.

His friend actually took a photograph on his mobile phone of the incident showing armed police using fire extinguishers to put out the fires on the two men. When they saw the military coming they got rid of the picture, due to their fear of what might happen to them.

Chang also said that the police went to internet cafes and immediately began monitoring emails. He believes that his mobile phone was also being monitored when he got back to his hotel with his friend.

He has also reported that up to 600 hundred people hwere caught and arrested in the three following days. Lhasa was swamped with military and police personnel, many in civilian clothes too. This state of affairs made himself and his friend very nervous, understandably.

According to news he heard while in Lhasa, the Chinese communist authorities blamed His Holiness the Dalai Lama for 'instigating' the current self-immolations, from his home in exile in Dharamshala, India.

In Mr Chang's opinion, the real situation in Tibet is not known by the outside world, or indeed even in China itself. Everyone has the right to know, he says, and China should let the world know.