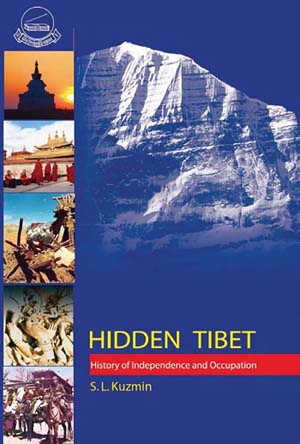 Dharamshala: - The English version of ‘Hidden Tibet: History of Independence and Occupation', a book penned by Russian writer Dr S.L. Kuzmin, has been made available online. (Click here to read)

The book was released by Sikyong Dr Lobsang Sangay at a function organised by the publisher, Library of Tibetan Works & Archives, in Dharamsala in April this year.

Sikyong (English: Tibetan political leader) said the book is neither pro-Tibet nor anti-China. "It is an unbiased book which depicts a complete evidence based history of Tibet's relation with the different dynasties that ruled China," he said.

The Tibetan political leader also welcomed the efforts made by Dr Kuzmin as well as many other western intellectuals to create more awareness about Tibet through books, adding, it helps disseminate more information on the current situation inside Tibet.

"The idea for the book began with his goal to analyse the history of Tibet from the point of view of ‘what was Tibet?' You find contradicting views in different sources, especially between the official Chinese academic books and the Tibetan documents," Dr Kuzmin added.

"So I compared and analysed these documents including some independent views from various intellectuals to conclude what was Tibet," Dr Kuzmin had said.

"Tibet is an occupied country which used to be an independent nation before. The only relationship that Tibet used to have with the Yuan and Qing dynasties were Priest-Patron relation," he added.

The book was earlier published in both Russian and Mongolian. It is being translated into Chinese.