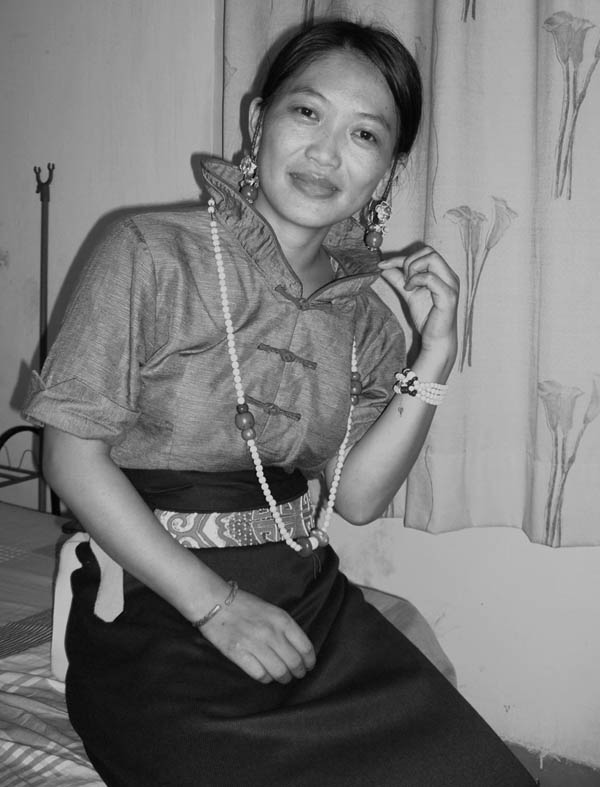 My land has been violated. My culture is disappearing. And now my language, too, is being digested, all into Chinese.

Of course, all languages are changing all the time, but the Tibetan language particularly is at risk of going extinct. Since the 1950's, Tibet's invading cultures have forced the language to assimilate into some of the world's more popular languages: Chinese, English and Hindi. As a result, my beloved language is dying.

And this is not just my experience but that of all the younger generation. It is required that students learn to count, speak, read and write in Chinese. As the youth continue to adapt Chinese as their primary language, the Tibetan language is dissolving.

Millions of Chinese people are immigrating into Tibet. With them comes all our necessities - clothing, furniture, food, technology, everything. They come to take the business opportunities here, which means that all people have to work in the Chinese language to survive. The Chinese culture is flourishing, but in its growth it is stamping out my own.

I felt powerless under the shadow of Chinese rule. I wanted to make a difference for my community, but in Tibet I would have been jailed for my humanitarian efforts. So I fled. I left my home three months ago, but even outside my phayul, my "Father Land", I find that the Tibetan language is being chopped up.

Here in Dharamsala, I see Tibetan-Indian citizens speak Hindi to each other, and I feel they are not Tibetan. I wonder, why are they talking in Hindi? Why not Tibetan? I feel almost betrayed. That's not to say that embracing other cultures is bad. Education about another culture is good. But a Tibetan speaking to another Tibetan in Hindi is a disgrace.

Other times, I see Tibetan refugees hack our language by splicing in English or Hindi words: "Reng la piasha katso yiew?" one might say, meaning "How much money do you have?" But piasha, the word for money, is the Hindi word that people use in place of gormo, the Tibetan word. And examples like this abound. I also often hear Tibetans pick up their mobiles with a "Hello?" and then hang up with "Bye!" They speak it like it's their father tongue.

I am concerned the Tibetan language will die along with the older generation. The younger generation already is mixing Tibetan with other languages, and I see my language dissipating. Once the language is gone, I fear that our culture will follow. After all, the local people make the foundation of Tibetan culture, but as that foundation cracks with outside infiltration, how can a culture be sustained?