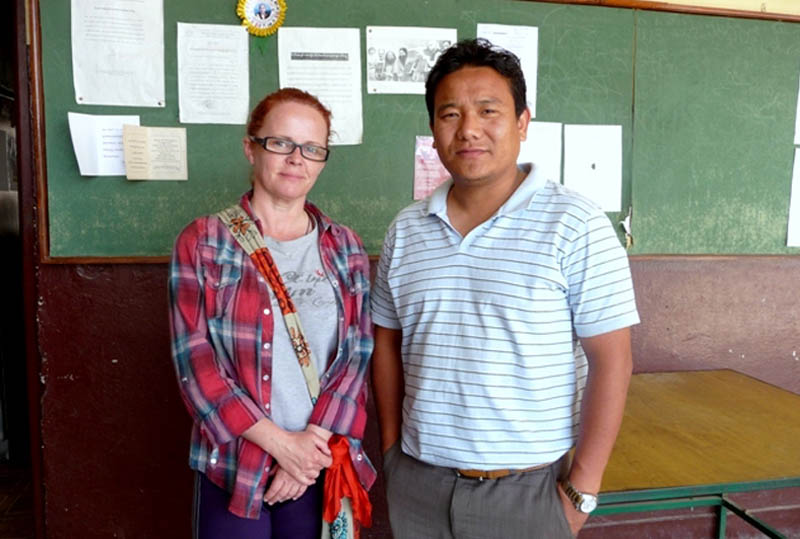 Kathmandu: - Mr. Dorjee Damdul, the director of the Tibetan reception center in Kathmandu, was interviewed by UNFFT Monika Svehlova during the 52nd anniversary of Tibet Uprising day this March.

The aspiration for Tibet Freedom has got its price. Over a million of Tibetans have been killed, thousands of monasteries destroyed, and the entire country has been wiped from the map of the world. Why and how could it happen during the 20th and now 21st century? The answer is obvious: Communist China has overtaken most of the world's economic power and the former leaders. USA, UK, Germany and Australia are now left to bite their nails while struggling to find a way to avoid the possible control from China in trade, currency, even politics.

The recent news from Nepal is scary. The Maoists attacked the main positions in the government. The growing influence of its northern neighbor is another dangerous threat to Tibetans.

"For Tibetans, who managed to survive the dangerous journey through the Himalayas to Nepal, it is the first place to stay. It becomes increasingly dangerous for them as Nepal police and secret agents are monitoring the route Tibet-Nepal constantly. The refugees must pay a huge amount of money in Tibet to the guides taking them to Nepal and the result of this risky decision is not certain... If they are caught while escaping, they are put straight into jail and their families persecuted. The Chinese officers would stop the supply of the basic necessities for the family, they and their families would lose the jobs they might still have and their life would become unbearable. Those lucky ones, who make it to our center, are safe behind its walls. We give those immediate medical help, food and shelter. The good point is they do not come to us in such horrible physical state as it used to be several years ago. However, all of them are deeply traumatized, they live in fear. Frankly, anxiety and trauma are the main problems for Tibetans after reaching our center." 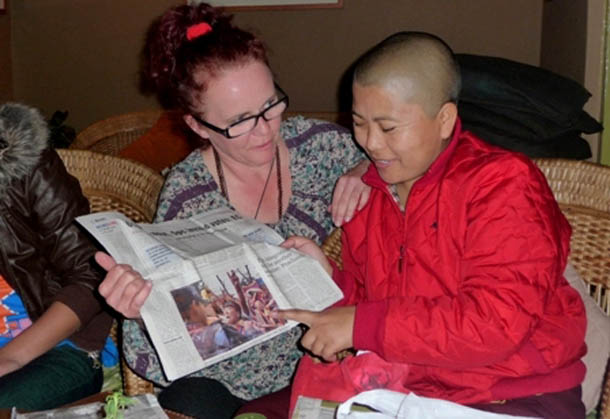 M: Do you cooperate with any health professionals? How can you help them, how do they help you?

D: Yes, we do have our doctor who comes to us once a week to provide the checkups. If there is any serious case, we send this patient directly to the hospital for further and specialized treatment. Minor injuries and illnesses can be handled in our own hospital which is based in the Center. The refugees get the basic vaccination and medication and also, we have a trained psychotherapist who comes to help them to deal with the traumatic experience and the consequences of leaving Tibet.

M: How many people can you accommodate and for how long?

D: We usually have here around 200-300 people and they stay with us for about a month. We do our best to send them quickly to India who accept them with no delay or any problems. The average age of the refugees is between 18 and 40, around 20 percent of them are children between 6 and 17 years old.

M: Do the refugees need any permission from Nepal's government?

D: When the Tibetans arrive here, they do have neither passports nor the status of refugee. So, we apply for a permission to leave Nepal at a specialized office here and also for the Indian visa. Usually, there are no problems with visas but sometimes the Nepali permission for certain people is refused. In such case, I communicate with UN, UNCFR or the American Embassy to make it happen. They are very helpful and we are usually successful. Then, when the basic paper work is done, we hire a bus and send a group of around 40 people to Delhi. They get the passports and the status of refugee there
within a short time, so then they go straight to Dharamsala to receive a blessing from His Holiness the Dalai Lama. Afterwords, they are sent to different monasteries, nunneries and schools around India according to their individual preferences, needs and skills.

M: Your center is right in the middle of Kathmandu. In the current political climate in Nepal how can the TRC stay protected?

D: We have good contacts with the local community and the authorities, they are very understanding. Despite of having our own water supply, we negotiated with the officials to have guaranteed water regardless of our own reservoir. And we continue to provide help for all Tibetans till they can go back to their home..in this case Dharamsala*

At the end, even though I was not allowed to take any photos, Dorjee la let me have a look at their hospital, so I managed to speak to nurses about the care for the refugees, also chat with women prepared for a transit to India. All of them were very shy but kind, with no signs of any anger, just hoping for a better future. In their hearts there is big sorrow, having gone through the trauma of leaving Tibet and family, knowing they might never return. But nobody is prepared to give up. "We want a free Tibet and hopefully, one day, have a cup of tea in Lhasa without being watched by Chinese soldiers," - they told me.

Mr. Damdul's parents were in a group accompanying His Holiness the Dalai Lama on his escape from Tibet in 1959. As a son of such parents, he has no hesitation in standing up what is important and right thing to do: the survival of Tibetans.