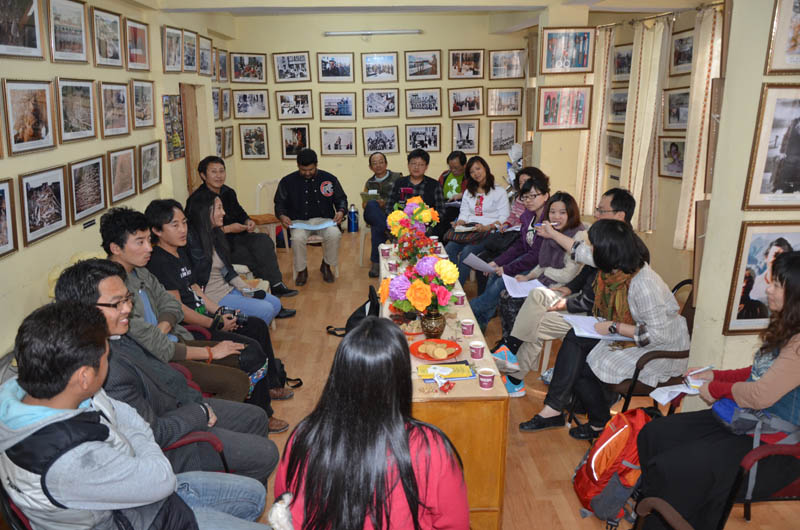 Dharamshala: - A delegation of ten members of Taiwan Friends of Tibet visited the Himalayan town of Dharamshala for one week from April 5, meeting with Tibetan NGOs including the Tibetan Youth Congress, Students for A Free Tibet and the Gu Chu Sum Movement of Tibet. They discussed issues including the struggles for Tibetan and Taiwanese independence, the current situations in those countries, and other global issues. The delegation also visited local schools and the offices of the Central Tibetan Administration.

The delegation stated that His Holiness the Dalai Lama's position will remain in the hearts and minds of the Tibetan people, and that independence is the best option for Tibet, but not the simplest.

The Tibet Post International (TPI): What is the main purpose of your delegation's visit to Dharamshala?

Wen Hui: Our most important purpose is to enable people from Taiwan to really appreciate this community in Dharamshala - to understand the real aspects of life. But the majority of messages about Tibetan society come from the media, which is very one-sided - giving their personal views - and it's hard to understand first-hand.

Local Tibetan NGOs are an important influence to help society understand the status and future of Tibet. Through the development of NGO groups, we can better understand the real situation and outlook of local society. Apart from the government, civil power is an important, influential factor for the future of our group.

TPI: I know your delegates met with members of the Tibetan Youth Congress [who have a policy of independence for Tibet]. You might also know about His Holiness the Dalai Lama's middle-way approach [which advocates autonomy for Tibet within China]. Independence or autonomy - which is best for the Tibetan people and why?

Wen Hui: Independence is the best option for Tibet, but not the simplest. I have been to Tibet. When I returned to Taiwan, I went to school and gave a speech about the difference between being inside and outside Tibet. Afterwards I came to Dharamsala. Indeed this place is relatively free. You can say out loud what you want to say, do what you want to do. Many friends here work very hard to preserve Tibetan culture, whether NGOs or individuals such as Kelsang Chukie, Tethtong and Tenzin Tsondue. Maybe I don't understand well the whole history of the world, but I know Dharamsala is the world's most successful refugee community. It has its own government, its own schools, with a very complete form of society. But life would be very hard without the personal charisma of His Holiness the Dalai Lama. Tibetans in exile have a common sense of solidarity.

I can see that the second and third generations of Tibetans who were born in India may never have the opportunity to return home. They do not have a concept of home. But because of their refugee status and their education, their Tibetan identity is very strong. They pursue an independent perspective to promote the unity of everyone, whether inside or outside Tibet. They are really united.

TPI: The Tibet issue has reached a level of international awareness. His Holiness the Dalai Lama has already announced that he will hand over his political responsibility to an elected body. What is your opinion on this?

Wen Hui: I have seen that traditional culture and customs in Tibet have been destroyed. Many other things are also prohibited. When Tibetans flee into exile, they just want to strive to retain their traditional culture. Although there is currently unprecedented unity, the preservation of traditional culture is difficult - maybe because of the impact of Western culture.

Tibetans go to India for refuge, but the idea of [Indian] charity may be withdrawn at any time. Here, the young Tibetans in exile keep saying they want independence, but they are very confused. With few employment opportunities, and competitiveness, life is generally very difficult. This is difficult and painful - to enter into a lower-class life is a very real problem.

I am personally most concerned about the issue of cultural preservation being diluted down from generation to generation. I have great admiration for the Tibetan people living here, but the young Tibetans don't even write in Tibetan, yet speak for Tibetan independence.

TPI: After His Holiness the Dalai Lama's political handover to a new elected body, do you think the new leadership will continue to gain international media coverage?

Wen Hui: For modern society, His Holiness' choice to retire was a very good decision, and also a very important one. His Holiness has helped Tibetan society build democratic institutions. But, for the people of Tibet, his Holiness is the symbol of empowerment.

Secular empowerment has existed for a long time, so his Holiness has chosen to retire in order to give more space for the newly formed Government to develop. The Chinese government knows that His Holiness will remain in the hearts and minds of the Tibetan people, so they keep saying that there is no Tibetan issue - only a Dalai Lama issue. Because for a long time the Tibetan people have thought that any decision taken by the Dalai Lama is the final decision.

As long as the Tibetan people exist, the Tibet issue will not disappear. His Holiness will take another form - another way to international awareness - which also highlights the sensitivity of the Tibet issue.

TPI: What is your opinion of His Holiness' intention to hand over political responsibility?

Adam Chih-Te Lee: Tibetans will have to face things without the Dalai Lama one day. On the political level, His Holiness' choice to retire will prevent the situation of two Dalai Lamas existing simultaneously - similar to the Panchen Lama issue at present. His Holiness the Dalai Lama does not want to cause political confusion, and wants to prevent the Tibetan issue from disappearing from international awareness after he passes away. So, in order to achieve democracy for Tibet, to gain Tibetan independence, this is the correct choice.

TPI: Do you really think and agree the new leadership will continue to gain international media coverage?

Adam Chih-Te Lee: Not so much will change suddenly, because Tibetan Buddhism brings a different experience to Western people's minds. But if Tibetans returned to the level of the independence movement in Tibet after the Dalai Lama's retirement, the whole Tibetan exile community will have to face the harsh test of the international community.

TPI: As a Taiwanese journalist, do you think the Tibetan struggle from 2008 to present has intensified or subdued?

Adam Chih-Te Lee: Since 2008, China's problems have not been confined to Tibet, but have been across all of China. Tibetan exiles insist on non-violent struggle, and that struggle has become the most successful movement in the world.

TPI: Whether you agree or disagree, Taiwan's economy depends on China, or at least benefits economically from China. Do you think Tibet has the same economic benefit?

Adam Chih-Te Lee: Communist China has repeatedly stressed that they liberated Tibet, and that they liberated the serfs. They offered economic development in exchange for political power, but ignored human rights. Food alone is not enough for the people. They need dignity, respect and rights, so the Communist Party should change their minds.

TPI: What differences are there between your expectations and the realities of Dharamsala?

Tang Zenling: This is my first visit to Dharamsala, although I had some understanding of Tibetans before I came. Everything is so real in front of me! It is difficult to express my feelings. I want to reflect when I return to Taiwan, and to address the Taiwan issue.

TPI: I know you are a Buddhist, and have strong faith in His Holiness the Dalai Lama. Have you been encouraged to see the small exile community, or have you been discouraged by your past few days' experience here?

Tang Zenling: I have always had in mind the image of the Dalai Lama in the Potala Palace. I do not care about Dharamshala - it's a small town.

Adam, Chih-Te Lee: The first time I came here, I felt the high lamas lead the monks and tens of thousands of lay Tibetans, which turns the Chinese communists' world upside down. In the meantime, I felt this was shameful for Taiwan, which has a population of 23 million. Dharamsala is not a big town - it has only two streets. Such people make Beijing restless.

For more photos of the event please visit our gallery, click on this link...