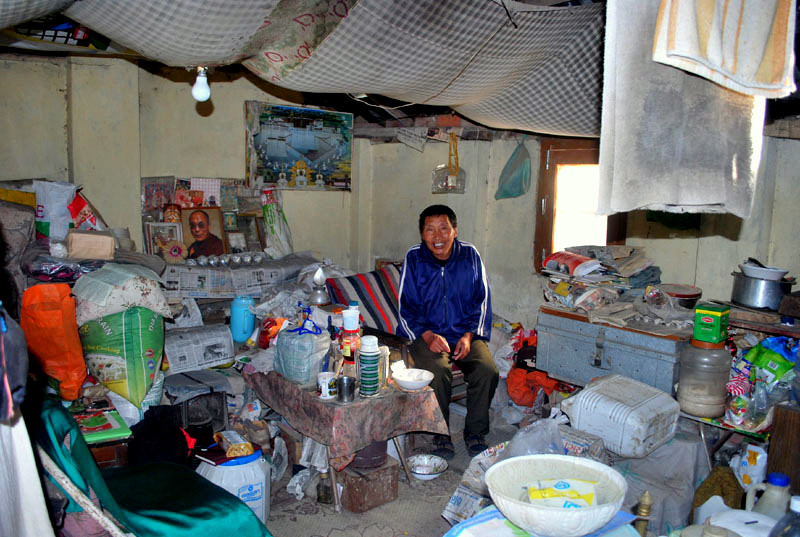 Dharamshala: Ngawang Gelek was born in 1944 to Darpa Kunjung and Tsewang Dolma in Chara Penpa County of Kham Region. In 1969 he joined an uprising against the Chinese government.


He was active in this battle for nine months, six of which in armed combat, before being arrested. He spent eighteen months in jail. He fled his home of Tibet in 1991 and now struggles against the elements and hunger in Dharamsala. His tiny one room shack is in a state of disrepair.

The following interview took place between Ngawang Gelek and Sangay Dorjee on April 22, 2011.

Sangay Dorjee:
Please introduce yourself.
Ngawang Gelek:
My name is Ngawang Gelek. I come from Chara Penpa County of Kham Region. I am 67 years old and I arrived in India in 1991.

S: When you arrived in India, were you able to attend school or receive training of any sort?

N: No, when I came to India I was 47 so I was not allowed to attend the TCV Suja School. And the Tibetan Transit School had not been founded yet. So the Tibetan Reception Centre sent me to Dhalhousie. There I worked weaving carpets for one year. I didn't feel comfortable staying there longer. One reason is because I didn't have a refugee card and so the police always harassed me. So I returned to Dharamsala.

S: What did you do after you came back?

N: When I came back I worked for almost seven years in the Tibetan Institute of Buddhist Dialectics. I worked as a cook, cleaner and I took care of the cows. But then I had a problem with my stomach and so I couldn't work very much and so I had to leave. I worked at Namgyal Monastery for two years, sweeping and cleaning the temple.

S: Then what did you do?

N: After that I rented a room near Jogiwara Road and worked one or two days a week, as much as I could with my stomach problems, at the Department of Health and the Department of Information and International Relations within the Tibetan government; cleaning, packing documents and other odd jobs.

S: How long have you been in this room?
N: Six or eight or nine years. Today we have no concept of time. I only know by looking at electricity bills how long I've been here.

S: Do you have any family or relatives here?

S: How about in Tibet?

N: Yes, I have one son and two daughters. My wife passed eight years after I came here.

N: Sometimes I phone them, but nothing else.

S: Can you tell me your life story when you lived in Tibet?

N: Oh, of course. My life story is so long. I can't finish it once I begin. In my homeland in 1969, we organized an uprising to fight against the Chinese government. At that time we all joined the organization and signed our names to become a part of it. We wanted our commitment to be official. I was twenty five years old. Our main purpose was to battle against the government but first we organized ourselves for three months. We listened and acted like we followed Mao's words during this time.

The horse of the Chinese officials ate barley and wheat while the people ate only vegetables. One day the Tibetan people went into the county and took guns and weapons from the army camp. In the county were two hundred members of the Chinese army. After three months we began fighting and we fought for six months. It was very hard and tiring. Then we lost and were imprisoned. I was held in jail for one year and six months. During the fighting, we didn't sleep, just fighting all the time.

S: Did you tell this story to the Tibet government?

N:When I arrived at the Tibetan Reception Centre in Nepal, nobody asked about my fighting, and I didn't feel I should say anything. But later I told this story to the Tibetan Department of Security in Dharamsala.

S: How much rent do you pay for this room?

S: Do the Tibetan Departments of Security and Health assist you, being a political prisoner?

N:  Yes, yes. They help me each month with 3500 rupees. And also the Tibetan Welfare office gives me around 4 or 5 bowls of wheat every month and some oil.

S: What is the greatest problem you face now?

N: My biggest problem is my stomach and also my blood level is very high so I need to always take medicine. Another problem is when storms come the rain comes through my roof and floods my house. And when it is windy the roof blows up and down

and around and I worry that it will fall off and the wind will blow over my house.

S: Have you been helped by Gu Chu Sum?

N: Yeah. They helped me for two years.

S: Did you apply for immigration to Australia; they accept Tibetan political prisoners?

S: What is your future hope?

N: My future hope is for the Dalai Lama to return to Tibet as soon as possible. That is my hope.

As a political prisoner, Ngawang Gelek receives a little help from the Tibetan Department of Health. But inflation has been very high in Dharamsala and he pays over 800 rupees for accommodation. His income of 3500 rupees (roughly US$85) per month must finance his dilapidated housing, his food bill and his growing medical bill. He has no funds to weather proof his home and must bear the cold winter months - snow and heavy rain - in a shanty spotted with holes, and during wind storms he must worry that his house might be carried away. He endures in these poor conditions, unable to protect himself from the seasonal elements, as his health continues to deteriorate.