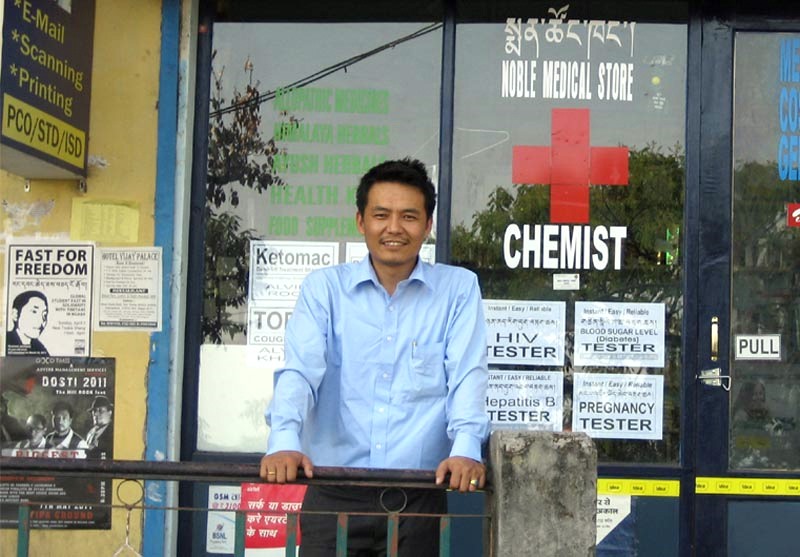 Dharamshala: Tenzin Rabgyal is a man with a democratic plan. The 31-year-old MA student of public administration, and volunteer campaigner for Lobsang Sangey's Kalon Tripa campaign, aims to found a new political party - the People's Party of Tibet (PPT) - in an attempt to create a two-party system in the arena of the Central Tibetan Administration (CTA). Rabgyal hopes to help pave the way for a "smooth democracy" with transparent governance, an absence of nepotism and, most importantly, a raised awareness about democracy among all Tibetans.

With its own candidates, the new party will stand in opposition to what is currently the only parliamentary political party in the Tibetan exile community - the almost two-decades-old National Democratic Party of Tibet (NDPT).

The differences between the two parties are significant. The PPT proposes that its party committee names the members of the Kashag (Tibetan cabinet), as opposed to the current system whereby the Kalon Tripa (prime minister) selects the ministers, who are then approved by parliament. 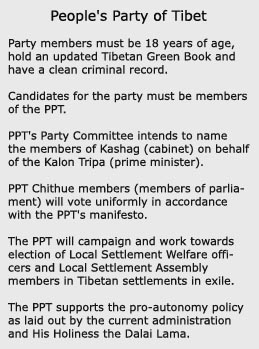 From the outset, says Rabgyal, the PPT will be a centre-field party that will take "the best from the left wing and the right-wing." But one policy will be set in stone - the PPT will take a pro-autonomy stance. This is in accordance with the policies laid out by His Holiness the Dalai Lama and the CTA regarding Tibet's relationship with China. The NDPT, on the other hand, advocates for an independent Tibet, as does the lesser known, US-based, National Rangzen Party of Tibet, which was started by political activist and writer Jamyang Norbu, but is so far only to be found as an interest group on the social media site Facebook.

According to the PPT's first-draft program, the party's main objectives are transparency of governance, educating Tibetans on democracy and its principles, and the preservation of Tibetan culture and traditions. The PPT's tentative manifesto also includes policies on welfare, education, health care and international relations. The program states, however, that "changes may be brought to the policies or programs after the set-up of a central party office and the formation of a party committee in the near future".

So far, this is all the vision of one man. However, later this year Rabgyal intends to canvass Tibetan settlements across India to find members and candidates for the PPT. Besides supporting the party's program, Rabgyal expects candidates to be hard-working, compassionate university graduates, and ideally to belong to the younger cohort of the Tibetan population in exile. With time, he also hopes to attract members and candidates from Tibetan settlements outside of India, and perhaps even establish party offices in places such as the US, Canada and Europe.

In a new interview with The Tibet Post International, below, Tenzin Rabgyal puts forward his ideas and motives to the public for the first time, and explains why he thinks Tibetans need a second political party.

Tibet Post International (TPI): What do you hope to accomplish by founding the People's Party of Tibet?

TR: The PPT and our candidates will work harder to convince and assure the Chinese government of our objective of the autonomy policy rather than independence of Tibet. Until now, the talks between the special envoys of the Dalai Lama and the Chinese government have had no third-party observers. We will try to get that and we will also better the autonomy policy by consulting international organizations.

TPI: What, in your opinion, are the biggest challenges for the CTA? 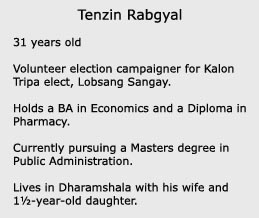 TR: Presently, I think the biggest difficulties or challenges for the CTA concern the health promotion programmes, which are not working properly, and that is why there are so many Tibetan people who are suffering from various diseases. Even TB and HIV/AIDS exist in the Tibetan settlements due to the lack of awareness of health. Health is the basic thing we need but the Department of Heath under the CTA lack some health promotion programmes and they are not very active in the Tibetan settlements in India.

TPI: Can you give an example of how the lack of human resource management is affecting the CTA and the Tibetan exile community?

TR: As I said, the health department of the CTA is not run properly and, frankly speaking, in the CTA, the secretary and highest officials of the health department...don't have any health education background. This situation reflects what I was saying about human resource management. Because of a lack of knowledge in health on the part of officials, this poor health level has not become better under the current administration.

TPI: How will the PPT be funded and will contributors be made known to the public? 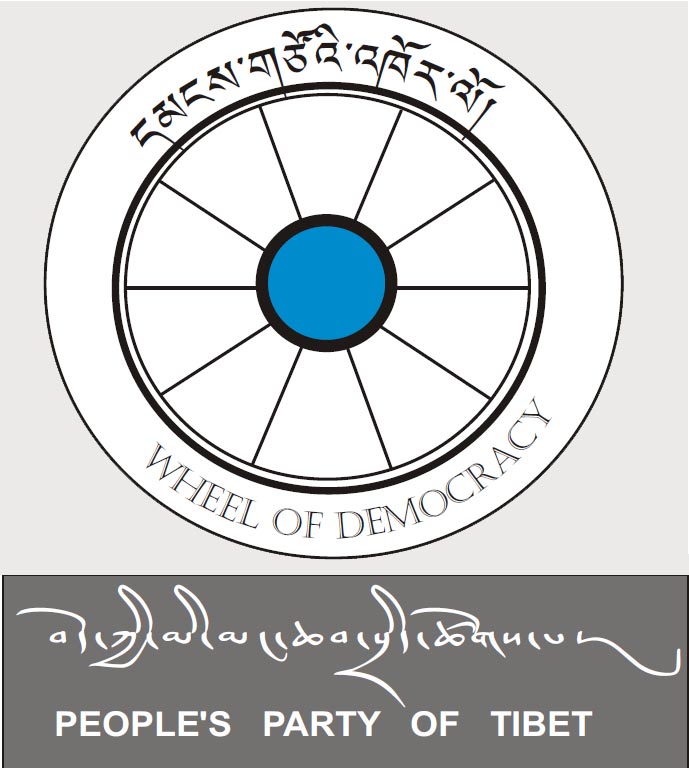 TR: I expect our party to be funded and supported by any individuals and organizations in democratic nations who support democracy and, of course, by the Tibetan people. If we receive funds, we will be very transparent with the public - who funded what, who donated to us, how we spend it. We will be open with the public - there will be no problems with transparency.

TPI: We have seen Lobsang Sangey elected as Kalon Tripa in the recent elections. Being the first democratically elected leader of the Tibetan diaspora, what would you like to see Lobsang Sangey accomplish during his five-year tenure?

TR: I expect Dr. Lobsang to run the CTA actively and transparently, with no nepotism and no favouritism, and I expect the CTA to acquire more scholarships in Western universities for Tibetan students, as well as to produce more professionals, doctors and engineers in India and the Western world. I also expect him to promote the development of Tibetan settlements in India. Some are very poor and not much developed in the last 50 years. Some of them are very remote and the CTA officials don't visit them often, so I expect these poor settlements to be developed. I also hope that Lobsang Sangey will develop the relations with China regarding the autonomy of Tibet. He has talked with many Chinese scholars about this issue and, so, from his campaign and his words, I see some good possibilities for a future dialogue between China and Tibet.

TPI: Until this point, do you feel that there has been a lot of nepotism in the CTA?

TR: There has been a lot of nepotism - favouritism. Actually, it is common everywhere, but I hope not to have such activities happen in the future Tibetan Administration run by Dr. Lobsang Sangey. He got the youth's vote and most of them are educated. We voted mainly not to happen such activities in the CTA, and to break those old barriers - to have a more transparent governance.

TPI: Some voices argue that educational levels, especially when it comes to the Tibetan language, is very poor. How does the PPT envision that a better and more extensive Tibetan school system might be developed and sustained?

TR: Regarding the poor level of Tibetan language among Tibetans, we are taught the language until high school, after which there is no such possibility in colleges. Recently, a few colleges have been set up, like in Varanassi and Bangalore, where you can study Tibetan further, but it is not enough. So we do not get practice and we are not in touch with the language, so, later on, we forget what we have learned and we cannot develop the Tibetan language. So I expect the CTA to introduce more and more summer schools, like they have in other countries, as a place to go and learn the Tibetan language. This will definitely help Tibetans to learn the language better.

TPI: On the subject of Tibetan refugees' status in India, will the PPT work to gain a more permanent status for Tibetans in the country?

TR: Yes. Actually, Tibetans staying in Western countries receive citizenship and other permanent statuses, and if our party runs actively and the majority of our party candidates get elected in [the] legislative assembly, or in the Kashag or as Chitoes, our candidates will voice a request to the government of India for a more permanent status, like in Western countries, to Tibetans staying in India for a sufficient period of time. If, for example, a Tibetan is living in India for ten years, he or she should be receiving similar status as an Indian person.

To find out more about Tenzin Rabgyal's new political party, visit the People's Party of Tibet's blog at www.pptibet.blogspot.com.