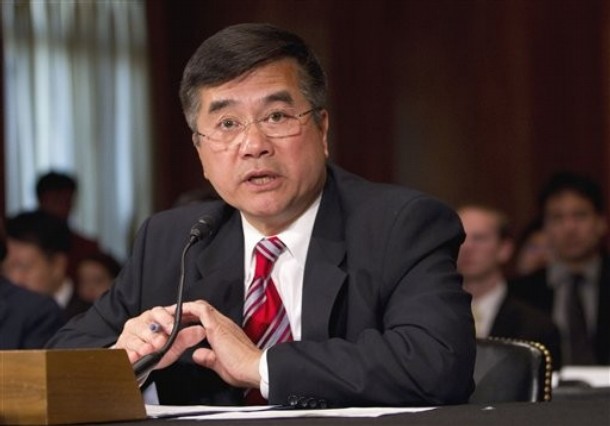 Dharamshala: The US Senate confirmed former Commerce Secretary Gary Locke as Ambassador to China on 27 July 2011. Excerpts from response given by the Ambassador to questions posed to him by Senators in connection with the confirmation hearing follows:

Question: Tibetans have been enduring an intensifying crackdown since March 2008, exemplified by the crisis at Kirti monastery in Sichuan province. Last month, the monastery was forcibly taken over by security forces; 25 monks remain in detention; 300 other monks have been taken away for "patriotic education"; and two laypeople were killed by security forces. Will you commit to travel to Tibetan areas, including beyond Lhasa, to seek accurate information in these closed-off areas, and to advocate for the religious, cultural and human rights of Tibetans?

Answer: The Department of State has urged China to relax restrictions on movements of U.S. government officials, journalists, and Tibetan pilgrims to and from Tibetan regions. Travel to Tibetan areas, including outside of Lhasa, is an important priority for our Embassy in Beijing, and, if confirmed, I will continue to press to have an opportunity to do so.

Question: Will you continue efforts to establish a US consulate in Lhasa, which was established by the State Department as a priority in 2008?

Answer: The United States and China currently have six diplomatic posts in the other's country. Future post openings are subject to host government agreement, per the Vienna Convention on Consular Relations and our bilateral agreement with China.

The Department sent diplomatic notes in 2008, expressing reciprocal interest in expanding U.S. diplomatic presence in China, with Lhasa at the top of the U.S. list. To date, the Chinese have not responded.

The Department remains committed to pursuing a post in Lhasa as a priority, and if confirmed I will continue to work on this objective.

Question: Will you work with the Special Coordinator for Tibetan Issues and her office to ensure that US policy and communications to the Chinese government are consistent and respect the long-standing two track US policy of (1) supporting dialogue between the Chinese government and the Dalai Lama and his representatives; and (2) supporting efforts to preserve the unique cultural, religious and linguistic heritage of the Tibetan people?

Answer: If confirmed, I will work closely with the Special Coordinator for Tibetan Issues and her office to ensure that Tibetan issues are raised frequently and candidly with China's leaders. The Department of State is deeply concerned by the human rights situation in Tibetan areas and by the lack of progress during nine rounds of talks between the Chinese Government and the Dalai Lama's representatives. If confirmed, in consultation with the Special Coordinator, I will support further dialogue between China and the representatives of the Dalai Lama to resolve concerns and differences, including the preservation of the religious, linguistic and cultural identity of the Tibetan people.

Question: I am troubled with the across-the-board restrictions and policy of selective access that China has applied to travel within China by U.S. diplomats and visiting US. Chinese officials have the ability to travel anywhere they want in the U.S., and have the freedom to engage in a broad range of Chinese cultural promotion activities on American soil.

Will you push for greater freedom of movement for U.S. diplomats in China, including travel to "sensitive" areas such as Tibetan areas and East Turkestan?

Answer: I will continue to advocate for greater freedom of movement for U.S. diplomats everywhere in China. The United States can only generate accurate information on developments in China by traveling frequently to all parts of the country and engaging with the people there. With the notable and unfortunate exception of Tibet and some Tibetan areas at "sensitive" times, Embassy officers generally face few restrictions on travel within China. However, they are generally unable to meet with provincial and local Chinese officials or institutions (including universities) unless they obtain approval from the Foreign Ministry and its local offices. U.S. diplomats regularly visit the Xinjiang Uighur Autonomous Region and Tibetan areas outside of the Tibet Autonomous Region to advance the full range of U.S. interests in those areas - particularly the safety and welfare of U.S. Citizens. Chargé d'Affaires Robert Wang visited Xinjiang in May. None of these visits were officially approved, and hence U.S. Diplomats could not engage with provincial and local officials or universities during their visits.

Travel to the Tibet Autonomous Region is restricted by the Chinese government, and our official visits are approved on a case-by-case basis and then only rarely. Although then - Ambassador Huntsmanwas allowed to travel there in September 2010, many other requests have been denied. Visits to Tibetan areas of Sichuan are often denied on the ground by local police although the area is open in
principle.

This is a serious problem that I will seek to address. The U.S. government has long pressed for free and full access to the Tibet Autonomous Region for American diplomats and also for members of Congress and foreign journalists. If confirmed, I will continue to raise this issue at high levels.