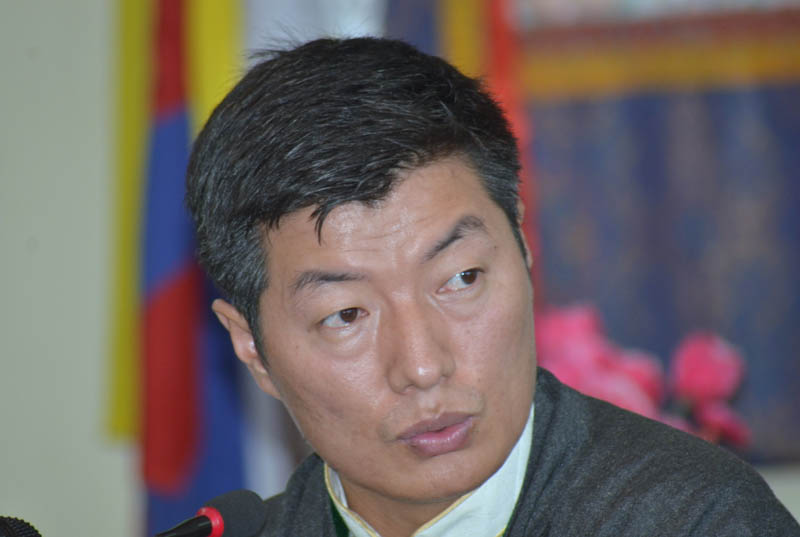 Dharamshala: - On October 23rd, The Prime Minister of the Tibetan Government in exile, Lobsang Sangay sat down for an interview with Karan Thapar of CNN IBN, on The Devil's Advocate. They discussed two main issues- the cause of Tibet in the face of China's steadily augmenting economic and political power, along with the recently flared debate on how His Holiness the Dalai Lama's successor is to be elected.

It has been 60 years since the Chinese occupation of Tibet and the His Holiness, the Dalai Lama was forced into exile. With China emerging as the second most powerful country in the world, is Tibet today a lost cause?' asked Mr. Thapar.

The Prime Minister, indomitably optimistic, insisted that the Tibetan spirit is strong and this will be the key to their victory. Only recently, Tibetan solidarity was displayed to the world when Tibetans in 30 countries participated in the election and jubilation of the Kalon Tripa. The skilled guidance of His Holiness the Dalai Lama, and the resilient spirit of the Tibetans is what will keep the issue alive, even after His Holiness' passing away.

The reality that must be faced, irregardless, is that although the philosophical debate is easily won by the Tibetans, the political realities are at odds with their cause. The international community must tiptoe around China, who wields power by virtue of having become an economic heavyweight, underwriting American debt and supporting large European investments. Thapar's argument is that Tibet's issues with China today are much more powerful than they ever were; with the Western world in recession, who will stand up for Tibet and risk the annoyance of Hu Jintao and Wen Jiabao? One is reminded of the most recent debacle that sparked outrage around the global Tibetan diaspora- the denial of a visa to His Holiness to visit South Africa for Archbishop Desmond Tutu's birthday. Even Barack Obama, the most powerful political leader in the world, treads lightly around the Tibet-Beijing issue. "Even when he meets the Dalai Lama, he won't do it in the Oval Office, but in an inconsequential room called the Map Room", for fear of antagonizing Chinese sentiment and thus jeopardizing their economic interests.

Sangay says that he understands the ambiguity and subsequent apprehension of the world over China, but Tibet and China have shared a torrid history spanning over 2000 years, and thus the Tibetans are ‘genetically disposed' to understanding their intricacies. He claims that although the horizon seems to be darkening in regards to Tibet's freedom, the Tibetans will work hard to make it possible, just as they did in 1913, when they secured the Dalai Lama's return to Tibet after 3 years of exile. Moreover, the Prime Minister calmly states, "There will be ups and downs- that's why we call it the ‘Tibetan struggle',but we are persistent....it is high time the international community rally with us'. Echoing the Dalai Lama's past comments on India's timidity, he also expressed his wish that the Indian government speak up more for the cause of Tibet, but maintained that India had done the heaviest lifting in regards to the situation and the Tibetans were extremely grateful to be ‘humble guests' of the country.

China Profiting From Its Alliances

Mr. Thapar, not convinced of his optimism, persisted that even although public sentiment and strategic sensibility point in the direction of India having a stronger stance towards Tibet, the government still does not do so. "Although there are a variety of issues", agreed Sangay, "it is for Indian leaders to debate, discuss and formulate a long-term policy regarding Tibet". He compared the struggle to that of Gandhi and Nelson Mandela, and stated that the long term goal and struggle of Tibet is based on Buddhist philosophy, which is around 2,600 years old, surely capable of outliving communism's meagre 100 year stint.

The Kalon Tripa claims that global diplomatic immunity is validated by the argument that each country must protect its economic interests, ‘But China itself is profiting from its alliances with India and America- so you help China profit, compromise your morals, and remain scared and anxious of them! In which case, who is really losing?' he asks, beckoning for the international community to stand up for the imperative democratic principles of freedom, dignity and identity, that they all enjoy in their own countries. Nonetheless, no one seems to be listening. Since becoming Prime Minister in August, Lohsang Sangay has repeatedly expressed his willingness to open up a peaceful dialogue with China, but they have not heeded to his requests. Sangay declares that if Communist China propogates the principles of rule of law, harmony and peace, then they should fulfill these principles in action and reciprocate the sincerity of the Tibetans in resolving the issue non-violently.

Thapar then expressed concern over diminishing hope and an unequal struggle between super-power China and Tibet. The hardlining Chinese successor, Xi Jinping, waiting in the wings to take Jintao's position, will not make the situation much easier.Xi Jinping, addressing an audience in Lhasa this July, declared "We will thoroughly fight against separatist activities by the Dalai clique and work to smash any plot to destroy stability and jeopardize national unity in Tibet".

Thapar and Sangay also discussed the issue of the succession of His Holiness, the Dalai Lama, sparked by a comprehensive statement made by His Holiness on the 24th of September, suggesting that the next Dalai Lama could be recognized and chosen during his lifetime and not necessarily by reincarnation. According to Thapar, the statement was a strategy to prevent the Chinese from appointing a successor after His Holiness' death and taking over authority of this religious office.

The Chinese almost immediately rejected the statement, claiming veto on the issue of succession. According to the Chinese Foreign Ministry spokesmen, Hong Lei, the Dalai lama in his own lifetime cannot identify his successor, and the title of Dalai Lama can be conferred by the Central Government alone. Sangay's response to this is that the Chinese government has no basis to reject His Holiness' statement; as a Communist government, they ‘treat religion as poison' and have no credibility or legitimacy in such spiritual matters. Sangay is sure that despite the Chinese verdict, Tibetan Buddhists worldwide- even the 200 million Chinese Buddhists residing in China- will abide by His Holiness' decision, whatever it may be.

Karan Thapar posited relevant questions to the Tibetan issue, each answered by the Tibetan Prime Minister with undettering positivity. The Kalon Tripa says that they are banking on the resilience of Tibetan spirit and their fundamental beliefs. Even despite darkening horizons, diplomatic immunity and the unweildly Chinese opposition, ‘miracles can happen'.