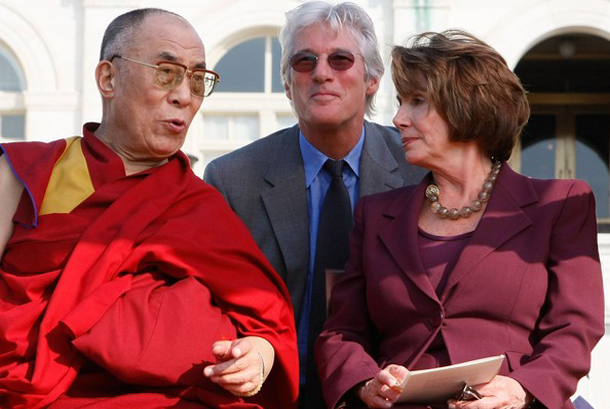 Washington, DC — House Democratic Leader Nancy Pelosi teamed up with Hollywood-Star and Tibet activist Richard Gere to praise the life of His Holiness the Dalai Lama of Tibet for his 80th birthday, saying the Tibetan leader teaches harmony, but China tries to banish his influence.

"On July 6 the Dalai Lama, whose spiritual wisdom and friendship have been touchstones for both of our lives, is turning 80 years old," Pelosi (Calif.) and Gere said.

"Since his harrowing escape from Chinese-occupied Tibet into exile on horseback through the high Himalayas into India in 1959, the Dalai Lama has become a towering figure on the world stage. He is a religious leader and a man whose message of peace and the universal values of love, compassion and respect has never mattered more," the two wrote in a Wall Street Journal op-ed, on Monday, July 6.

"Reaching one's 80th birthday is a significant milestone in any culture, none more so than in Tibet. It is a moment to celebrate," the two legends expressed.

"It is also a moment for reflection. In the Dalai Lama's homeland, more than 140 Tibetans have set themselves on fire since 2009, giving their lives to protest oppression by the Chinese government and the Chinese Communist Party's vitriolic campaign against the exiled Tibetan religious leader," they added. "Two years ago Chinese troops opened fire on Tibetans peacefully gathered to celebrate the Dalai Lama's birthday. News has emerged recently of tightened restrictions in advance of his birthday this year, with a ban on celebrations to mark the occasion."

Perhaps one of the most remarkable achievements of the leader known to his people as "Kundun," meaning "presence," is his profound and unbreakable connection with the people of Tibet. They sometimes offer a simple greeting to visitors: "Listen to him." It is too dangerous to say his name, but they mean the Dalai Lama. Many young Tibetans use a phrase in Chinese on their social-media profiles that means "I learn to be strong in waiting for the great teacher to return from afar."

"Chinese people are also increasingly drawn to the Dalai Lama's teachings, Tibetan culture and especially its Buddhist religion. Making it absolutely clear that he is not anti-Chinese, the Dalai Lama has always distinguished between the Chinese government's policies and the Chinese people," they wrote. "Wherever he travels, he engages in dialogue with the Chinese he encounters, from state media journalists sent to monitor his news conferences to Buddhist devotees from across China, Taiwan and Hong Kong, many of whom have traveled on pilgrimage to Tibet and witnessed the hardships, including the constant threat of arrest and torture, imposed on Tibetans."

"The quest by many Chinese for a new understanding of Tibet, inspired mainly by the Dalai Lama, is a development of great significance for China's future. For many of these Chinese, it is not an empty attempt to reach a mythical Shangri-La on the roof of the world," they added. "Often it is a painstaking and intellectually rigorous inner journey in which the realization of a shared struggle becomes apparent. At this critical moment, Tibetans and Chinese share a yearning for freedom and a determination for their voices to be heard beyond the darkness imposed by an authoritarian state."

"The nonviolent nature of the Tibetan struggle should serve as an inspiration for a world riven by conflict and shattering acts of violence. Inside Tibet today, a younger generation now leads the nonviolent struggle to protect Tibetan freedom, religion and culture. Schoolchildren link hands and march to government education offices to protest when textbooks use Chinese and not Tibetan language," the two said, adding "Teenagers write poetry in their own language in literary journals, expressing pride in their Tibetan identity. Young monks study the precepts of their religion in monasteries rigidly controlled by Chinese government cadres, even though the monks know that if they fail to denounce the Dalai Lama, they could be dragged away in the middle of the night and imprisoned."

"At a time when China has increasing diplomatic heft, other nations grant too much accommodation to a government that imprisons its artists, free thinkers, lawyers, poets and human-rights activists. Indulging such a government undermines the values and interests of all democracies. We need to develop a more honest and clearheaded relationship with the current Chinese leadership—one that encourages China to become a better and more responsible global citizen."

"During his long life, the Dalai Lama has shown that harmony between peoples is based on freedom of expression, the ability to speak the truth and mutual respect. Realizing the bold vision and goals of the Dalai Lama would not only make China more stable but also more genuinely secure, allowing greater strides toward modernization and responsible leadership in the world," they expressed, saying "There is no better way to honor the Dalai Lama on his 80th birthday than by standing with him and the Tibetan people, vowing to keep their cause alive."

Mr. Gere, an actor, is chairman of the International Campaign for Tibet. Mrs. Pelosi is the Democratic leader of the U.S. House of Representatives.