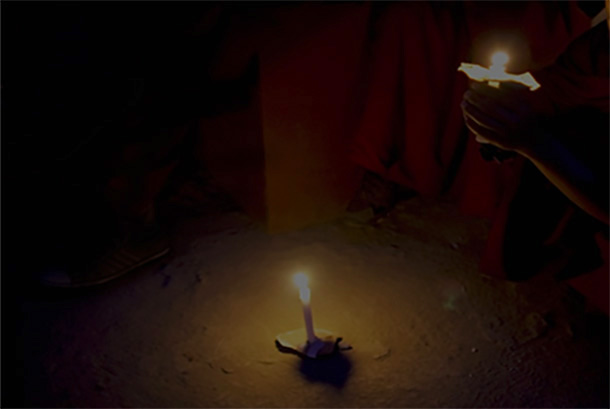 Dharamshala — A Tibetan Buddhist monk currently living in Dharamshala, India asked to be treated in anonymity as he wants to return to his hometown and reunite with his family. Any public appearance against the Chinese rule would pose risks to his plans and danger to his family. For the safety of his family, TPI will be referring to him as Sonam.

Sonam was born in a small village called Mongo in Amdo Ngapa in 1971. He is the youngest of his family and the only one living in exile. In his early years he went to a small village school and used to work as a shepherd. He decided to become a monk when he was 15 years old and so his parents sent him to Kirti Monastery, based close to his hometown, in Eastern Tibet.

Kirti Monastery had been destroyed during Mao Tse-tung's Cultural Revolution in the 60s and 70s, only to be refurbished in 1991. Thereafter, Kirti became a centre for protest and resistance and naturally, was under severe surveillance by the Chinese authorities. It was also targeted for what the Chinese call "patriotic re-education campaigns," where Tibetans undergo intensive propaganda and are forced to declare their loyalty to the Chinese government.

In 1995, Sonam heard that some monks from his monastery were escaping to India, where His Holiness the Dalai Lama and the Tibetan government in exile – Central Tibetan Administration – were based.

On the 3rd day of the Tibetan New Year, Sonam and a friend left to India. Their first stop was Lhasa, where they settled for more than a month trying to find a guide to lead them through the Himalayas. They then travelled to Sakya by bus and, upon arrival, met 10 other people who were also on their way to India, whom they decided to join. They walked together for 29 days and Sonam said they were extremely lucky not to come across the Chinese police.

"If the Chinese police had seen us we would have gone straight to prison," Sonam told TPI.

"On one occasion, I was very tired and hungry and it was hard for me to walk. I passed by a household and the door was open so I could see a family dining. Starving, I went inside and took one of the potatoes that they were eating. It was not a good idea. The man of the house suddenly stood up and threw me out... We had many problems like this on our way," he added.

He also told TPI that at times, as they were out of food and supplies, they acted like beggars asking for food and money to anyone who was passing by.

The guide took them through Shar Kumbu, a Tibetan Refugee camp in Nepal. Sonam expressed that at that point, his biggest fears were actually the most probable situations: "If the Chinese caught us, we would have gone to prison and if we were stuck in a snowstorm, the only place left for us to go was the next life."

When they finally managed to reach a town in Nepal, Sonam and his friend, with the financial help of some people from Hong Kong, bought their bus tickets to Kathmandu.

"All was going smoothly until we were stopped at a police-check post close to Kathmandu and we were arrested. They put us in separate rooms and said many things in Nepali that we couldn't understand. After one hour, the senior policemen began the investigation, he asked lots of questions but we could not understand anything. After that, his partner took us to a bus and I thought they were taking us to the Chinese authorities. I was so scared. Fortunately, the bus didn't move back and I was finally in peace."

The rest of their trip was quite peaceful. Sonam thanks the Dalai Lama for all his attention to the Tibetans in Exile and for establishing Tibetan Refugee receptions in both Kathmandu and Delhi.

Sonam has not been able to return to Tibet ever since. He has tried to get his travel documents from the Chinese Embassy four times but these have been refused, making it extremely difficult for him to leave India.