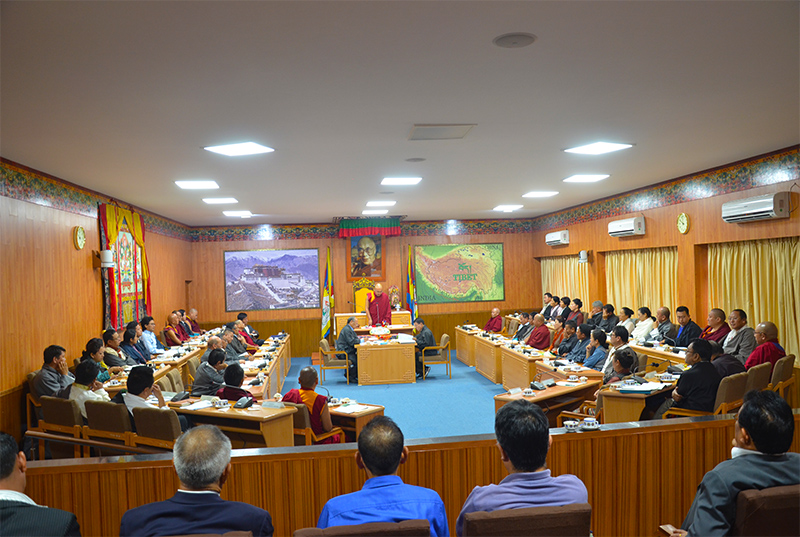 Dharamsala – As the second session of the 16th Tibetan Parliament in Exile was nearing the end, one of the 44 members, Lobsang Dakpa (Do-Toe), newly elected this year gave an exclusive interview the Tibet Post.

“Every year we have two sessions, so this session is the second session of the 16th Parliament and in this session we are discussing about the report of different department. Different ministers from different departments, they will submit their report, what they have done, on that the Parliament will take opportunities to put questions to the ministers, if they have some doubts then they need to clarify the doubts.

“The Parliament hearing can also give suggestions to different departments for the better functioning of the department. On the first day, the discussion revolved around the current dialogue with China and the Prime Minister Lobsang Sangay has explained about the situation now and what is happening now. He has given a very detailed explanation.”

According to Lobsang Dakpa, the policy and the demand of the Tibetan administration and also more than 65% of the Tibetan people are demanding for His Holiness The Dalai Lama’s middle way approach. He also claimed that, “We are not seeking independence on the administration level but individually they could have different thoughts, different opinions, some of them just say we need to have independence and some of they say we need to achieve this middle way approach but the official demand is not independent but the middle way approach. We are willing to stay in Chinese government but we need to have our own authority to preserve our culture, religion, language and all those things. “

Another member Sonam Norbu Dratsa said that, “The major activity was to select one Cabinet minister, it happened on 24th. The person who was to be selected couldn’t go up due to the majority vote against her was 27 and for her there were only 14 votes, and two were dismissed votes. After this, we generally discussed the annual report of each department. The first one was Religion and Culture and then was Home and then we came to the Finance ministry and then the Education and the Security – the defense we are yet to cover and then we have health.”

When asked about the discussion revolving around the middle way approach, he said that there was not much discussion about it since the session is live streaming, and so the Chinese officials might be listening in and it would be unwise to discuss so many details because of that. He mentioned that, “The Prime Minister said that they could not discuss it in details since it may harm his future planning and they have the plans and projects on table and ready and so once the other party give any signal or show interest, then we are very much ready from our side.”

Yangchen Dolkar, another Parliament member affirmed and said that there was some dialogue with Chinese and that the administration is ready to take the move when the other party shows interest. When TPI asked Sonam Norbu Dratsa about amendments and if any bill has been passed or not, he said there would be a vote and if there is more common support, in the sense they will raise their hands either for the motion or against it.

Pema Delek from Do-Toe said, ”We are going to amend some rules to appoint the staff of the CTA. It was unanimously passed the resolution in the previous session of the parliament and there was no special discussion about this during this session. There was no special discussion about middle way. The Prime minister explained the international support for the Tibet issue but in China there is not much change.” The amendment procedure is not complete; we are just discussing to appoint a special staff because if we want to appoint some very special person for the post, so there is no clear rule in the charter. So, this is to give some special power to the kasha.”