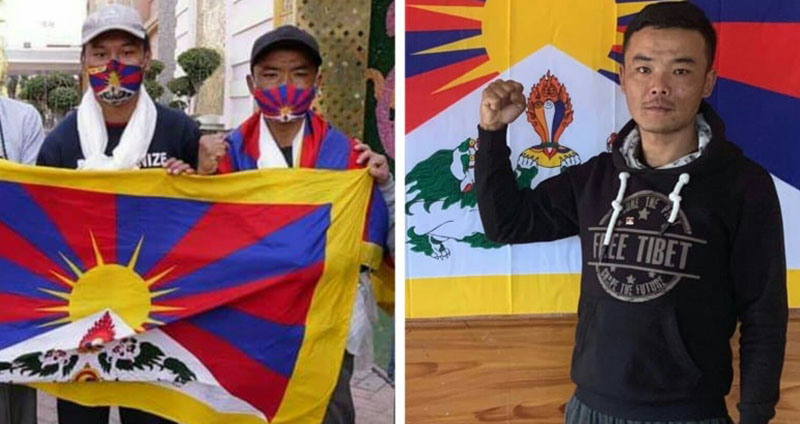 Tenzin Dhondup and Tenzin Nyima, two Tibetan youths who are on peace march for Tibet from Dharamshala on November 2, 2020 to Nathula, Sikkim, India within 90 days of walk covering over 2,100 km. Photo: TPI

Dharamshala, India — A significant interview with Tenzin Dhondup, a Tibetan youth who is on a solo peace march for Tibet from Dharamshala to Nathula, Sikkim covering over 2,100 kilometres in a span of 90 days. He shares with Tibet Post International (TPI), his subsequent three demands of the freedom march. He strongly voices that India shares its border with Tibet historically not China.

He wishes to highlight the repressive policies in Tibet and raise awareness on the importance of Tibet’s environment to the whole world at large and Asian countries in particular since Tibet is the source of water to 1.5 billion world population.

TPI: Can you give us a short introduction of yourself?

Tenzin Dhondup: My name is Tenzin Dhondup. I escaped from Tibet to India in 1997. I did my early schooling in Tibetan Children’s Village (TCV) Gopalpur situated in Himachal Pradesh (HP), India. Presently, I am working at McLeodGanj in Dharamshala, HP. Right now, I am on a solo march for Tibet from Dharmshala to Nathula in Sikkim, North eastern part of India which connects its border with Tibet. My friend Tenzin Nyima joined me on this march from Chandigarh. He is from Darjeeling, West Bengal. He studied at Central School for Tibetans, Darjeeling. Currently, he is studying at a Chandigarh college for his Bachelor of Hotel Management (BHM) course.

TPI: What inspired you to march for Tibet cause from Dharamshala to Nathula initially?

Tenzin Dhondup: When I heard news of Tibetan men from Manali going on a peace march for Tibet cause from Manali to Delhi. I felt why I could not do the same as them for Tibet. Therefore, I decided to go on a Solo Peace March to spread awareness about Tibet. I started the March for Freedom from Dharamshala on November 2, 2020 and expected to reach Nathula, Sikkim within 90 days of a walk covering over 2,100 km. I will stop for a while at Chandigarh, Delhi, Varanasi, Bodh Gaya, Siliguri and Gangtok for press conferences and to meet concerned officials to hand over my appeal letters. I distribute pamphlets on the way as well.

TPI: What are the main goals of this solo march and how important is a solo march for Tibet cause?

Tenzin Dhondup: The main goal of this march for freedom is to spread awareness about Tibet issues, especially the importance of the environment of Tibet and its significance to whole Asian countries and people. Tibet is a main water source for its neighbouring Asian countries including India, Nepal, Pakistan, Bangladesh, Laos, Cambodia etc. Nowadays, many environmentalists and scientists have said that the changing of Tibet's climate and environment will affect not only Asian countries but the whole world eventually. Therefore, it is very important to raise awareness in India and the world about the environment of Tibet and its preservation.

TPI: What were the most difficult situations you faced on the way of the March?

Tenzin Dhondup: Since the start of my solo peace march from McLeod Ganj, I didn’t meet many difficulties on the way. There are many Tibetan brothers and sisters and also some Indian friends who supported and encouraged me to keep going. One difficult is that there are endless Highways to walk on.

TPI: Can you explain the statements you gave to the Chinese Embassy and UN in Delhi?

Tenzin Dhondup: In the statement, I mentioned about my solo March for Freedom from Dharamsala to Nathula in Sikkim on 02 Nov 2020. The purpose of this march is bringing awareness to Chinese aggression on Tibet and India. Hence, I asked three urgent and important demands.
1. Seeking urgent attention to the deteriorating environmental situation in Tibet.
2. The world must accept Tibet as an occupied country.
3. China should be punished for the recent attack on the Indo-Tibet border by boycotting products made in China.

Tibet was an Independent Country. China occupied Tibet in 1959 and attacked India in 1962. Prior to Chinese occupation of Tibet, there was no border between India and China. India shares its border with Tibet. The vast environmental destruction and exploitation in Tibet due to China’s occupation is affecting the world at large and India in particular. I strongly condemn the recent attack on the Indo Tibet border in Ladhakh area by communist Chinese army. Before the Chinese occupation there was almost no industrialization in Tibet. Chinese industrialization and extraction have now moved millions of Tibetan nomads from their traditional grasslands to urban settlements, opening their land for the extraction of resources and ending traditional agricultural practices which have sustained and protected the Tibetan environment for centuries. In recent years China has paid for the infrastructure to greatly expand its level of extraction in Tibet. Tibetans have no power to protect their own land and must watch the economic benefits of its resources flow out of their country. While China's government is quick to claim that its presence in Tibet has increased prosperity and development, it is clear that China takes much more from Tibet that it gives, and that as it transports Tibetan resources off to Chinese manufacturers, it leaves behind environmental and social destruction. I urged the United Nations and the international community to look into my urgent appeals and support my demands.

TPI: How do you spread the Tibet issue to Indians and how do they receive?

Tenzin Dhondup: First we let them know that we are Tibetans and distribute pamphlets in order to let them understand the situation of Tibet. Making them understand how Tibet was an Independent Country and how China occupied Tibet in 1959 etc. In the pamphlets, I mentioned that the purpose of this march is to bring attention to Chinese continuous exploitation of the natural resources of the Tibetan plateau for their own benefits leading to a deteriorating environmental situation in Tibet consequently, affecting the rest of the world and particularly South Asian nations.

China continues to repress and oppress the innocent Tibetans with baseless allegations and imprisons anyone who speaks out any dissent of democratic expression. Therefore, for sixty years, the peaceful resistance of Tibetans inside Tibet and the global Tibet movement has shone the spotlight on Chinese leadership's draconian policies and lack of transparency. Tibet stands as a testament to China's flawed leadership and miscarriage of justice. Today, the world is bearing the brunt of China's flawed and unethical leadership, and their unaccountability. It is time we come together to unite and take action to prevent the authoritarian Chinese leadership from further making humanity face its worst crisis ever in human history.

China's recent attack on the Indo-Tibet border is a clear indication of its aggressive and oppressive expansionist policies. Therefore, the world must have learned a lesson by now that China can't be trusted and should acknowledge the Chinese aggressive policy everywhere else in the world, including the introduction and implementation of the hard-line policies in Hong Kong. So, we all should counter and control the Chinese authoritarian regime from causing and creating more chaos to every one of us by choosing not to buy products Made in China.