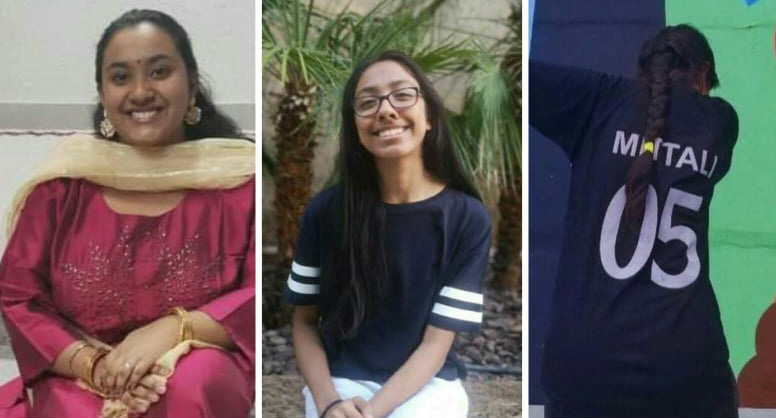 Dharamshala, India — An exclusive interview with three students from prestigious and esteemed universities of India. They shared their perceptions and insights towards Tibet and touched upon important themes like Indo - Tibet Border, importance of Tibet for India's security, the Panchsheel treaty, and Tibet Issue with Tibet Post International (TPI).

Mitali Dhar, a graduate, has always been interested in International Relations and has constantly excelled in her studies as well as sports. Krithika Ravi Iyer, a final-year student, is a brilliant student and is extremely passionate about journalism and politics. Rupashree Ravi, a sophomore, is one of the most talented and versatile students in her university.

TPI: What are your views on Indo - Tibet Border?

Mitali: Ever since the beginning, Indo - China have had border issues and since China started claiming Tibet as their part, it was not in favour of India. India and China do not share borders as Tibet is a great barrier between both the strong countries. China is trying to occupy Himalayan borders making India insecure. India has always looked for peaceful negotiation but it looks like China does not care about the term "peace".

Krithika: There was never a border issue between India and Tibet historically when Tibet was an independent country. China occupied Tibet in 1959 since then there have been border issues between China and India resulting with China’s long interferences in Indo-Tibet border matters. It has been a huge threat to India since then with China claiming portions in the border. India needs to take a strong stance on the issue. It should be included as a major issue while making policies and the existing policy should be revised, instead of following the peaceful co-existence strategy.

Rupashree: The border that India shares with China is through Tibet, which is recognised by India as the Chinese autonomous region. Tibet should be one of India's core issues to focus on. Although the root of the border is colonial, no effort has been made by India to grant sovereignty to the state since its independence in 1947. It recognises Tibet as a part of China although it provides refuge to His Holiness the 14th Dalai Lama and lakhs of Tibetan refugees.

TPI: How Tibet is important for India's security?

Mitali: Tibet shares its borders with two of the most powerful and populated countries in Asia and hence a lot of border-related security issues have resulted ever since China started occupying the whole of Tibet, which is a great threat to India. Since India being a responsible neighbour, it is providing shelter to Tibet refugees before doing or going against this decision of China, India will require to change its policies and needs to stand strong about itself.

Krithika: Tibet is an important part of India's security and strategies. With China taking the opportunity to claim the land and extend their borders, it puts India in great trouble in the border issues. Having a strong opinion on Tibet would help India in declaring Tibet as an occupied region, making China's claim on the Himalayan borders illegal. A change in the policy would give India a stronger hold on the Himalayan borders legally and globally.

Rupashree: In simple terms, Tibet is essential for both human and military security as it not only provides natural resources but also can be the solution to a lot of border issues that our nation is facing in the present times.

TPI: What is Panchsheel and what was the motive behind this agreement from both sides?

Mitali: Both the countries signed the Panchsheel agreement mainly for peace, resources, intelligence and also to arise as strong countries individually. The Chinese government after taking full control over Tibet went ahead to deceive India. They began to claim regions on the Himalayan Borderline to use it as a bargaining chip to show the world the reason of its political interests in India, and neighbouring countries.

Krithika: The main idea for the agreement was five principles to be followed for peaceful coexistence. For India, the whole agreement was an official understanding between the nations, respecting their internal affairs, territorial integrity, and also promoting a peaceful existence amongst themselves. Whereas for China, this was an opportunity to gain their trust with India, and eventually started claiming the border region, through trust. It also ensured that India took no role in their internal matters since China was in strong favour of the principles in the beginning.

Rupashree: The Panchsheel agreement being extremely idealistic, turned out to be a diplomatic blunder that served very little purpose. Although its motives were peaceful coexistence, mutual non-aggression, and non-interference to strengthen security and economic relations between both nations. The Treaty failed because it did not grant autonomy to the independent state of Tibet. Moreover, Tibet did not know about the agreement itself, which led to China's aggression and control on the region.

TPI: What can be the steps taken to spread awareness about the Tibet Issue?

Mitali: The differences of India and China can be seen off the border and on the border. Both the countries are not on good terms with each other and it can be observed with the increase in the closeness of China-Pakistan. Whereas in UN-meetings also both countries are against each other. India is very clear through these platforms that they don't like Tibet being occupied by China.

Krithika: There are quite a few articles on the net, so maybe using social media to make small posts or videos telling the whole thing would be useful. Everyone uses social media and would prefer to watch something like this, it gives the information.

Rupashree: Tibet is often overlooked in global politics. The issue should be taken to the United Nations and granted an observer status. If India, Nepal, and Bhutan who share borders with the region call it the Tibetan border instead of the China border, recognition and international awareness of the dispute can increase. Furthermore, if India could adopt strict policies on the Tibet issue, it can cause trouble to China and strengthen resistance amongst Tibetans.

The TPI expresses its gratitude towards these students for their time and contribution towards the interview. It gives TPI immense pleasure to see how the younger generation are educating themselves to ensure a better tomorrow. It reminds us of something that His Holiness the 14th Dalai Lama of Tibet mentioned some days ago, ‘The younger generation is our hope’.