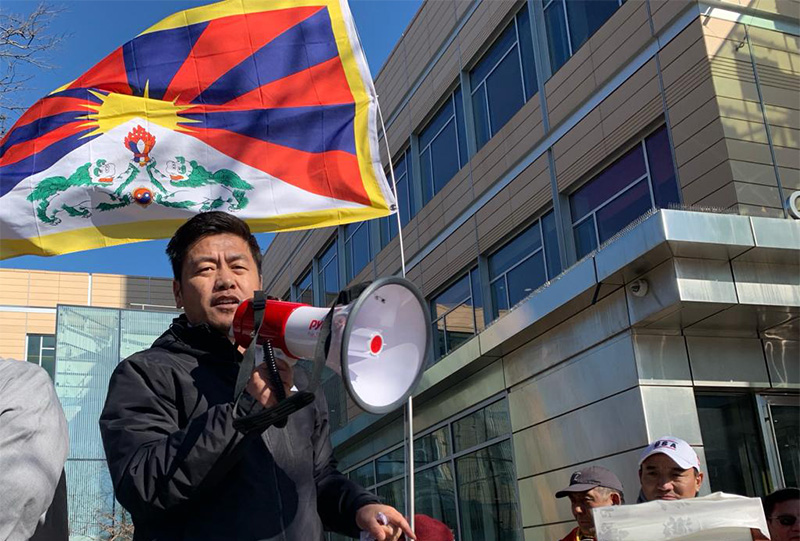 Dharamshala, India – An exclusive interview with Dorjee Tseten, the executive director of Students for a Free Tibet (SFT). He shares with Tibet Post International (TPI), his early involvement in activism, and passion to serve his community. He also talks about SFT’s successful campaigns, and its contributions to the Tibetan Freedom Movement.

Founded in the year 1994 in New York City, SFT has grown into an international network of students and non-students in more than 35 countries with an excess of 650 high school, university and community chapters advocating for the freedom of Tibet and its people.

TPI: Could you please introduce yourself and talk about your work in the organization?

Interviewee: I am Dorjee Tseten. As a Tibetan born and raised in a Tibetan refugee community in India, my passion to serve our community grew during my early school days. My involvement in Tibet activism started during college days. This passion brought me to Dharamsala, the capital of the Tibetan exile movement after my graduation. I currently work as the Executive Director of Students for a Free Tibet (SFT) International.

SFT works in solidarity with the Tibetan people in their struggle for freedom and independence. We are a chapter-based network of young people and activists around the world. Through education, grassroots organizing, and nonviolent direct action, we campaign for Tibetans’ fundamental right to political freedom and human rights.

TPI: What can you tell us about the campaigns launched by SFT in the year 2020?

Dorjee Tseten: Due to the Coronavirus pandemic, 2020 was an unprecedented and especially challenging year. However, despite the challenges, our work for Tibet hasn’t slowed down. From holding Apple accountable to shutting down the China-sponsored propaganda exhibit about Tibet, we’ve achieved major milestones for Tibet. On October 1st, the founding anniversary of the People’s Republic of China, SFT coordinated over 200 organizations to stage the largest strategic cross-movement day of action ever organized against the Chinese government.

Spanning 6 continents, more than 90 cities and towns around the world, “Global Day of Action: Resist CCP,” sent a strong message to the Chinese Communist Party: our movement for freedom is stronger than ever. And we will not stop until all Tibetans, Uyghurs, Hong Kongers, Southern Mongolians, Taiwanese, and Chinese people are free.

One of the campaigns I am particularly proud of this year is the passage of the ground-breaking legislation, the Tibetan Policy and Support Act 2020 which strengthens US support for Tibet. SFT grassroots chapters across the United States played a crucial role in securing for this legislation by organizing key meetings with their elected leaders and sent hundreds of letters in support of TPSA. Our global network also organized many nonviolent direct actions to expose the truth about Xi Jinping’s dictatorship and the Chinese government’s initial cover up and mishandling of the pandemic.

TPI: The closure of Chinese government-led Confucius institutes is a huge win; can you tell us how much it has helped the Tibetan Freedom Movement?

Dorjee Tseten: SFT launched its first ‘Say No to Confucius Institute’ campaign in 2014 to combat China’s growing soft power initiatives on college campuses around the world. There is growing momentum for ‘Say “No” to CI’ around the world, with students, faculty and community members engaging in the campaign and the issue being raised at the highest government levels.

In 2020, we have seen over 23 Confucius Institute closures across the United States. Several universities where SFT had ongoing priority campaigns including the University of Washington Seattle and University of California Davis also terminated their contracts with the Confucius Institute. We are now seeing the global impact of SFT's campaign, with more CI shutdowns taking place in Sweden, Canada, Australia, Germany and other countries.

TPI: What have been some of the efforts made by SFT in making Tech Corporations such as Apple and Google accountable, for their continued financial relations with China?

Dorjee Tseten: SFT’s worldwide network worked in partnership with Chinese and Uyghur rights activists, digital technology experts and ethical consumer rights campaigners to build pressure on Google not to pursue developing a censored search engine for China, code-named “Dragonfly.” After nearly 10 months of campaigning, in 2019 Google publicly confirmed at its shareholders’ meeting that there are “no plans to offer a search engine in China”—this was a great victory for Tibet.

In September 2020, for the first time, Apple released a human rights policy after pressure from human rights groups after campaigning for nearly two years. In our work for Tibet, as we resist Chinese Communist regime’s repression and occupation, we also have to fight against the corporations and multinational companies that sell out to CCP’s bargain and are benefiting from China’s occupation. These victories prove that a small activist group can hold multi-billion-dollar companies like Apple and Google accountable for enabling China’s cyber-surveillance and censorship.

TPI: In the time of a global pandemic, what were some of the challenges SFT faced?

Dorjee Tseten: Due to the Covid-19 pandemic, SFT was unable to organize our key yearly training programs such as Free Tibet Action Camp in the US and India. Instead, we organized smaller training to core activists and emerging youth leaders.

During the quarantine, despite the challenges of not being able to have physical events, the SFT team launched a new digital campaign: SFT Live. SFT Live was hosted on Instagram and Facebook and covered a wide range of topics beyond the pandemic, including activism, politics, health, Tibetan culture, music, and resistance history, reaching 1.25 million unique viewers.

TPI: What are some of the campaign goals and objectives for SFT, in the year 2021?

Dorjee Tseten: As the Coronavirus pandemic escalated around the world, there was growing outrage against China and Xi jinping for its crimes against humanity. Governments are finally acknowledging their failed policies of engaging China and how China has now become a threat to global democracy and open society. These changing geopolitical situations have opened many new opportunities for our movement to expose China and strengthen the Tibet movement globally.

Taking advantage of these opportunities, SFT will consistently organize hard-hitting campaigns and actions, and deploy cutting-edge training programs and strengthen the Tibet movement, both in and outside of Tibet. Tibetan Political prisoners remain one of SFT’s core priorities. SFT will continue to fight China’s advances in the international arena through strategic grassroots campaigns and by exposing China’s propaganda. SFT is working closely with a coalition composed of Uyghur, Hong Konger, Southern Mongolian, Taiwanese, and Chinese democracy activists to campaign against the Beijing 2022 Olympics.

TPI: Any message for the general public or specific group?

Dorjee Tseten: I just wanted to thank everyone for their continued support of SFT and the Tibetan Freedom Movement. This was an especially challenging year under unprecedented circumstances brought on by the pandemic. In times like these, we draw inspiration from the people in our communities who use their energies to sustain the movement. It is the power of this community that gives me hope for the future of Tibet.

With your help, we will challenge Xi Jinping’s reign of terror in Tibet, wage a strong global campaign against the Beijing 2022 Olympics, activate new leaders from the next generation, and further strengthen our cross-movement coordination to fortify our path to freedom. Please make a donation today- to make 2021 a momentous year for Tibet. Please make a donation today – your donation, no matter the amount, will help us in achieving many more victories for Tibet in 2021.