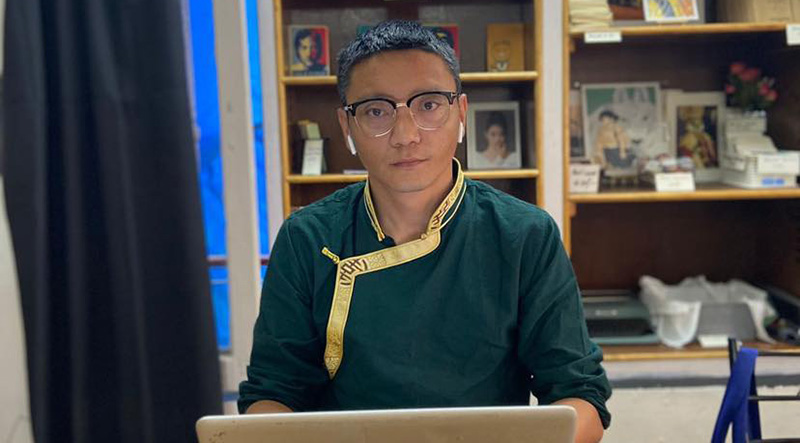 Kunsang Tenzing, the founder and director of Stories Of Tibetans.

Dharamshala, India — At a time when the Tibetan cause is being neglected in the world, Kunsang Tenzing talks about the importance of storytelling and how he is working to preserve Tibetan memories and create a digital archive of Tibetan oral history. “I want to introduce the story of Tibet to the world in a different way,” he told TPI.

TPI. Can you give us a brief introduction of yourself and what you do?

Interviewee: My name is Kunsang Tenzing and I was born in Tibet. I came to India when I was very young and went to TCV school. Then I went to Bangalore University. After completing my studies, I came back to Dharamshala to serve the Tibetan community. At the moment, my biggest project is called Stories Of Tibetans. It is more about preserving the oral history, and the stories of the Tibetan diaspora, because I think we can learn a lot by sharing stories. That is what I am mainly doing at the moment.

What led to the creation of this project was listening to a friend of mine, who is currently in Australia. He was a former political prisoner. Listening to his stories, I found them so moving, inspiring and encouraging. I asked him why he did not share them with others. He told me that this was very common in the Tibetan community. But I thought that this should not only remain in the past, but should be done internationally, on all social media. I think that was when I started writing origin stories about different individuals. I think that is what started this project.

TPI: Could you tell me more about the NGO that you started?

Kunsang: Tibet Centre of Hope started out of the huge question of what I am going to do now after I finish university. I started teaching English to some of my monk friends. So the Hope Centre was created by accident, because about 80 students came to my door to learn English. At the same time, I realised that whether it is autonomy or freedom for Tibet, we Tibetans must first be individually independent. To be able to contribute to our family, then to the community and finally to the nation. This is the kind of philosophy I had about the Hope Centre. At the Tibet Hope Centre, I not only taught English, but also organised basic life skills courses. That is what I did for eight or nine years.

TPI: Does hope become a major theme for you, in your projects?

Kunsang: Well, I think hope is the thing that helps me to look forward to doing something, because if we do not have hope, it is a bit like living a normal life without dreaming. With hope, we make plans and look forward to the future. As Tibetans, we hope that one day we will be able to return to Tibet. So hope plays a huge role in my life. And that is what really motivates me to do something or to serve the community I live in.

TPI: What are the main objectives of the NGO and what motivates you to do it?

Kunsang: With the Tibet Hope Centre now, I am more of a retired member, like an advisory board. I do not work with the Centre anymore. The main objective of Hope Centre was to make every individual independent. When we come to India, if they face lack of communication skills, they are not able to find their own livelihood. In such a situation, there is no chance that they can think of our community or our own nation, right?

So wherever they go, whether they live in India or whether they go to the US, Australia, France, or wherever, I wanted them to have the basic communication skills and the basic knowledge, like how to send an email, how to use social media and all those kinds of things. But that was kind of the main goal, to bring them and include them in a world where people are so used to the international language.

With the stories of Tibetans - for almost 70 years we have been talking about the Tibetan issue everywhere, on every platform we can find. But in a way, I think with the evolution of technology, we have to find other ways to raise awareness about the Tibetan issue. After being in exile for 70 years, we are still repeating the same story. I think it is really boring for people to listen to. Therefore I really wanted to find a way to involve people in our community and present it to the outside world.

I think sharing the personal stories of Tibetans is the right way to touch the hearts of non-Tibetans. As far as oral history is concerned, it is obvious that if we don't touch history, it is meaningless. What I wanted to do was to bring more unity to our community. There is a huge gap between the older generation and the younger generation, a lot of misunderstanding. So when I present new stories, when I share what an individual is doing to live their life, or how they are contributing to the cause, there is a better understanding between the generations. I think it really helps to strengthen and unify opinions in society.

The idea is to bridge the gap between the old and the new generation. In a way, with my work, I have been able to make a lot of progress in this area. With my stories, I try to send a message to the older generation: we are really doing something for our Tibetan cause. The only difference is that we are doing it in the 21st century way: more social media, more lobbying, etc.

TPI: Out of all the stories that you have documented, is there anything special or memorable that's close to your heart that you would want to share?

Kunsang: I did a project called Fading History, which is more like an oral history project. While documenting their stories, I really wanted to be able to invite them on a larger platform. I did not want it to be virtual or just a video. I wanted the younger generation to come and sit and spend time with these elders and listen to them, because I found that the elders really sacrificed a lot to build this community. But now they are fading away with their past, they are slowly disappearing. So I think it is time to give them space or develop a platform for them to share their stories before it is too late. This project has really pushed me to pursue what I am doing now.

My favorite story is about a woman in her seventies. I asked her to sing a song in Tibetan that she knew from her time in Tibet. The lyrics were about her dream, her wish to return to Tibet. It really impressed me, because even at seventy years old they cannot go back to Tibet, but they still have this dream. it is really moving, our generation should have this kind of emotion. Even if we contribute to our cause, I do not think we have that kind of emotional attachment to Tibet. Because many of the present generations were born in India and even those who came from Tibet came when they were very young. So yes, that story has stayed with me and I have no words to describe it.

TPI: What are the challenges that you encountered so far in these projects?

Kunsang: The biggest challenge I faced was the cost, because I mostly had to travel. But now, after the pandemic, everything has become virtual: you can call someone directly and interview them. But I prefer to meet them on the ground rather than zooming into meetings or video calls.

Another challenge is that it is really difficult to find the right people to interview. When I find people who are willing to give an interview, they do not remember much of their early life, especially the older generation. And then the current generation, they are open, but they still have limits, they do not want to share their personal stories. So it is very difficult to get the right story. I think those are the two main problems.

TPI: What message would you like to convey to the public, to Tibetans and non-Tibetans?

Kunsang: For Tibetans, what I want to share is that I think it is really important for us to lead rather than wait for someone else to do it. I mean that the main thing is to lead yourself, to take individual initiatives. Because we have access to all this information and technology. With the help of these technologies, I think we can use these resources to raise awareness of the Tibetan issue.

For non-Tibetans, when we were in school, we learned about Nelson Mandela and Mahatma Gandhi. They were a very close example for my generation. But today, we have His Holiness the Dalai Lama, he is trying to solve the issues through non-violence. If you really believe in humanity  and peace, then I think it is important to support the issue of Tibet while His Holiness is alive. So that in the future people believe in peace and non-violent movements.