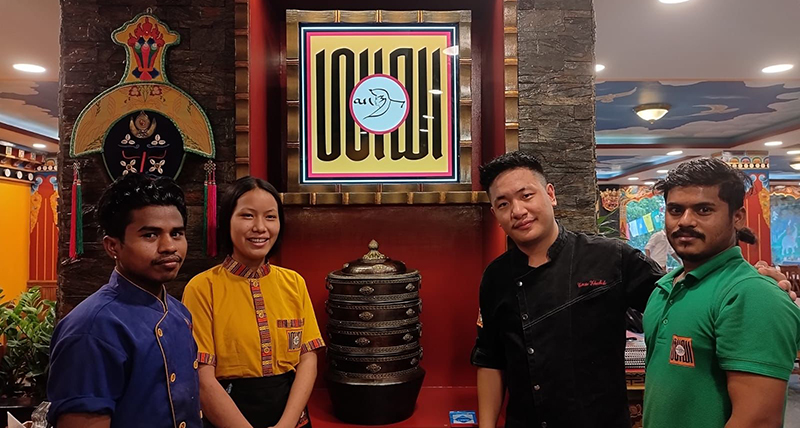 The Tibetan Chef Tenzin and his colleagues at Makye Ama Tibetan Kitchen in Majnu-Ka-Tilla, Delhi, India.

An exclusive interview with Tenzin, the Head Chef of the Makye Ama Tibet Kitchen in Majnu-Ka-Tilla, Delhi, India. He spoke to TPI about his passion for cooking and introduced a variety of Tibetan food that is loved not only by Tibetans but also by people from all over the world.

The Tibetan people eat a lot of protein, meat and dairy products every day to have enough energy to fight the cold. Butter tea, Tsampa (roasted barley flour) and yak meat are the three basic and traditional cuisines of Tibet.

Thukpa is among the most well-known meals that have come from Tibet. However, Tibetan cuisine consists of much more than merely soupy noodles. There are many Tibetan dishes that rival Thukpa in quality and their flavors are just incredible.

Another cuisine that is quite popular in India is Tibetan Momo(dumpling). These dumplings can be made from a variety of meats or vegetables and can be steamed, fried or boiled. They are always served with a particular and delectable spicy sauce made from tomatoes, chillies, and garlic.

The Makye Amay Tibet Kitchen, located in Majnu-Ka-Tilla, Delhi offers customers a delightful taste of Tibetan Food, and this beautiful restaurant promises great quality of food and has attracted its customers with its lovely Tibetan-themed interior design.

TPI: Can you give us a brief introduction of yourself?

Interviewee: My name is Tenzin, I was born in India and worked as a chef in top restaurants and hotels in Chennai and Goa. During the period of my life when I reflected on my Tibetan culture, I soon realised that the isolation and remoteness of the Himalayan region had maintained distinct local influences and encouraged the development of its unique character. The particular geographical and climatic characteristics of Tibet encouraged pastoralism and the development of a specialised cuisine from neighbouring regions, adapted to the demands of the human body at these high altitudes. So when the idea of bringing this cuisine and culture to the tables of Delhi was presented to me, I was excited.

TPI: How is Tibetan food culture different from others?

Interviewee: Tibetan cuisine has a wide variety of dishes. It consists of noodles of various shapes, vegetables and meat in a broth. Meat dishes are usually based on mutton, pork or chicken, often dried, or cooked in a spicy stew with potatoes. Our menu combines two aspects of Tibetan food culture: street food and luxury dining. It is an interesting combination of both. In addition to the authentic Tibetan cuisine we offer, we also have a separate Pan-Asian menu that covers the famous Japanese varieties of sushi, as well as Thai and Chinese cuisine.

TPI: Who is your biggest inspiration?

Interviewee: I was in fifth grade when I decided to become a chef. It all goes back to watching my mother cook delicious food. I was so inspired by her hard work that I wanted to do this my whole life. Cooking is an art and I believe I was able to practice under her guidance to turn my skills into a career. Without a doubt, my mother is my biggest inspiration.

TPI: How did you deal with the pandemic and what impact did it leave?

Interviewee: Like everyone else, the pandemic has brought many difficulties. Many of the businesses in Majnu Ka Tilla, from craft shops and art galleries to street food vendors and restaurateurs, have suffered. But since Makye Ama opened its doors after the second wave of Covid-19, it feels like an ode to renewal, freshness and better starts.

TPI: Where did the idea of a separate Tibetan Menu and a grand Tibetan Interior Design come from?

Interviewee: The owner of Makye Ama Tibetan Kitchen had the idea to decorate the entire interior of the restaurant with a Tibetan theme. The rich designs, beautiful architecture, details and paintings all have meaning. Overall, the place is vibrant and grand.

Although we have authentic Tibetan cuisine, we wanted more of a fusion of cultures where we could bring them together on one table. That's where the idea of Pan-Asian cuisine came from. So we have two separate menus, one dedicated to Tibetan cuisine and the other to Japanese, Thai and Chinese cuisine.

TPI: What does Makye Ama signify?

The songs and poems date back more than 300 years and have been translated into different languages around the world. In recognition of its deep spiritual and historical significance and value, this restaurant was named after the term "Makye Amay".

“Rising from the highest mountain top is the bright and glamorous moon. It reminds me of the smile of Makye Ama, which shines in the depths of my heart,” wrote Tsangyang Gyatso, the 6th Dalai Lama.