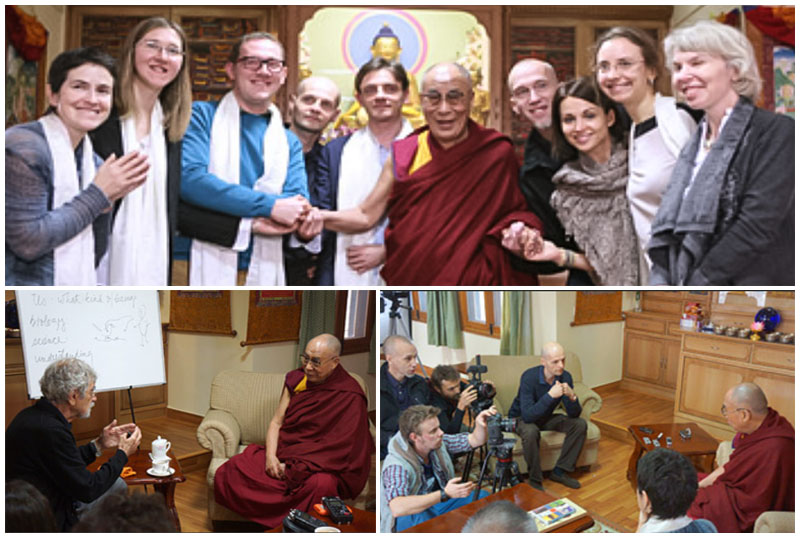 New Delhi, India, 22 December 2013 - "The purpose of this kind of teaching is to understand the Dharma, which can help us learn to transform our minds," began His Holiness the Dalai Lama this morning. "And this is a class or lecture I'm giving. Listen, try to understand and then try to apply what you've understood. I'm not here to give blessings! We'll have a question and answer session. Please don't talk too long and try to frame your question clearly. You have a right to ask what you like and I reserve the right whether and how to answer."

When a Ukrainian told him that yesterday he and 20 of his compatriots had decided to become Buddhists, His Holiness said that he usually draws a distinction between religion and culture. Belief in Buddhism is a matter of individual choice, but Buddhist culture relates to a community.

"Whether you follow the Buddhist path is up to you. If you feel it's useful to you, that's fine. You don't need a grand lama wearing a peculiar hat to perform a ceremony to mark the occasion. If you feel drawn to it, that's sufficient. I often say that it is generally safer if people follow the culture and religion they were born to. But nevertheless, there seem to be many people who feel the Buddhist path may be more effective. If you want to take up the practice of Buddhism, that's fine, but you should retain respect for your traditional religion."

A woman who has observed that in some places Buddhist cemeteries are in much worse shape than Russian Orthodox ones wanted to know what His Holiness thought about it. He told her that the important thing is to lead a meaningful life and what happens to a dead body is not so important for Buddhists. He pointed out that here in India Hindus cremate, but he came across an interesting alternative method in Nagpur that had been established by Baba Amte. This involved wrapping the corpse in a shroud and burying it directly in the ground without a coffin. A tree is planted at the spot. Baba Amte's reasoning was that the body that rots in the ground does some good and the tree can function as a living memorial. His Holiness remarked that if more people did this it would have a positive ecological effect. The audience applauded.

Another question concerned dealing with people who regard kindness and patience as signs of weakness. In his reply, His Holiness repeated that it's important to distinguish between agent and action. People make mistakes when driven by anger.

"We need to forgive the person who has acted against us, while condemning his or her actions. What we usually do is to become angry with the person. The issue of Tibet may show us a clear example. Tibetans have suffered unbearable atrocities, which we are opposed to, but we nevertheless need to cultivate compassion for their perpetrators."

"What do you think is most difficult for a modern and contemporary Buddhist?"

His Holiness replied that he didn't think there was much difference between ancient and modern Buddhists. External things may have changed, but our minds and emotions remain the same. This is why he considers Buddhism relevant to someone in today's world.

Turning back to Chapter 5 of the 'Guide to the Bodhisattva's Way of Life', he quoted the Buddha as saying that the unruly mind is our foe, while a disciplined mind is a friend who will bring us happiness. He mentioned that in relation to the practice of the Dharma a lama or spiritual master is important. If you keep good company, you pick up good habits. Because what we seek is happiness, we rely on a spiritual master who shows the path.

"If we don't seize the opportunity now, we'll regret it later. Buddhism is not about filling people with fear, but taking the opportunity. Unfortunately, in Tibet people often misapprehended what was important about a lama, being more impressed by his grandeur and the size of his caravan. With someone like Dza Patrul Rinpoche who lived simply like a mendicant, people underestimated his true quality."

Chuckling, His Holiness said we don't hear anything about the Nalanda masters' secretaries or treasurers. We shouldn't let ourselves get confused about what a good teacher is. Je Tsongkhapa asked "If you can't tame your own mind, how can you expect to tame others'?" His Holiness told a story about Dromtonpa's passing away. He had laid his head in Potowa's lap when Potowa began to weep and one of his tears fell onto Drom's cheek. He asked, "What's wrong?" and Potowa replied, "So far I have relied on you, who will I rely on now?" and Dromtonpa told him from now on he should regard the scriptures as his teacher.

Regarding what is to be adopted and what abandoned, His Holiness said we need an understanding based on reason and logic. We need to see the pros and cons of different courses of action; we need to understand their consequences. And having understood; we need to develop a wish to put these practices into effect.

After lunch, there were more questions and answers. There was a question about a Buryat lama's body that has remained fresh long after he died. His Holiness acknowledged that this does happen and even among Christian adepts too. He said there were cases in Tibet of old chortens crumbling away to reveal a fresh looking body inside.

When a woman told him her grandson had hanged himself and asked what would happen to him, His Holiness commiserated saying it was very sad and noted that there seems to have been an increase in suicide across the world. He suggested it indicates a lack of love and compassion in our societies, which is all the more reason for promoting these qualities.

"From a Buddhist point of view, as his grandmother you have a strong connection with him, much as a teacher has with a disciple. If you say some prayers and perform wholesome actions, it can help him. Do the practice of taking refuge and generating the awakening mind on his behalf. Visualize the Buddha and recite his mantra. You can recite Om mani padme hum too. Whatever merit you create dedicate it for your grandson to have a happy future and to come into contact with the Dharma."

A man from Ukraine said that there are many young people out on the street facing danger. What can be done? His Holiness responded that this was a political question and since 2011 he has completely retired from political responsibility.

"However, he said, "to answer your question properly, let me come to Ukraine and study the situation properly. Then I can tell you." The audience applauded.

"I always say that the world belongs to humanity and each country belongs to its people, not to their rulers. The best way to govern a country is democracy. Government in which the leadership is accountable to the public is best. And the public should have the ability to dismiss their leaders. In this context a free media is essential. I encourage the media to have a long nose to sniff out what's going on in the open and behind the scenes. Then inform the public of the reality. But you must be honest."

At this point a man took the microphone and explained that his colleague was offering His Holiness a set of monastic robes with prayers for his long life and the hope that he'll be able to visit Kalmykia again. They were followed by another man who expressed thanks on behalf of the Kalmyk people and his own family for His Holiness having given teachings. He asked him to excuse their mistakes, but repeated the invitation to visit Kalmykia, saying that they had a longstanding connection.

"Firstly," His Holiness replied, "I have been to Kalmykia three times already and I noticed how well you have maintained your Buddhist traditions. These days there are students studying with us here in India. Telo Rinpoche's parents originally came from Kalmykia and he can help promote Buddhist understanding among you."

Another woman said her son had gone missing and she was at a loss about how to find him. His Holiness told her he had no special power to see where he could be and advised her to consult the police, whose job it is to protect citizens.

As he began to read Chapter 6 about Patience, His Holiness remarked how important it is, because the main obstacle to cherishing others is hatred and anger. He quoted his American psychiatrist friend Aaron Beck who says that 90% of our sense of anger and attachment is mental projection.

"Attachment and jealousy don't have the same power to uproot virtue. But the moment anger arises in us it has the potential to destroy the good we may have accumulated. We can see this clearly if we observe ourselves. What's more scientists say anger weakens our immune system. The remedy is to relax. This is not just a matter of relaxing physically. It's necessary to relax the mind too. When the mind is full of anger, it's completely distracted and your intelligence becomes blind. We need to address anger by examining what gives rise to it and trying to avert that cause."

At the end of a long afternoon, His Holiness announced that tomorrow he will give an Akshobhya empowerment preceded by lay persons' vows and bodhisattva vows. Because this involves establishing a relationship between student and lama, he suggested that it would be better if anyone who persists in propitiating the malevolent spirit Dolgyal or Gyalpo Shugden were not to attend. He acknowledged doing the practice himself until he recognised the truth of the 5th Dalai Lama's assessment that Dolgyal is a perfidious spirit born of wrong prayers who harms beings and the Dharma. Proceedings tomorrow will begin early.