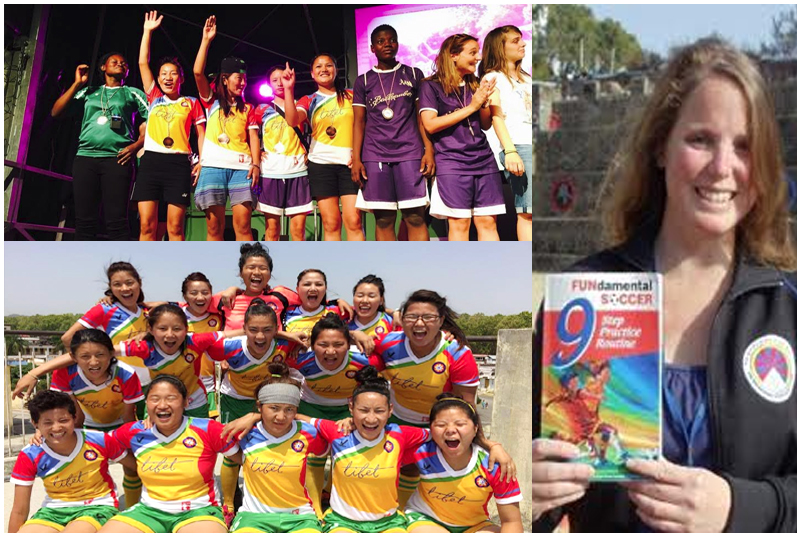 Dharamshala — It was for the first time since its formation in 2011 that players from the Tibet Women's Soccer team soared the skies and played on an international pitch last month. The Tibetan footballers-in-exile were invited to attend the Discover Football Beyond Borders festival in Berlin, Germany from June 27 to July 6. They shared the football pitch with a team of players from China as well.

The Tibet Post International interviewed Cassie Childers, the programme manager and founder of Tibet Women's Soccer, who is based out of the United States, on the team's experience and the ways in which sports can be used as a tool for diplomacy.

1. First and foremost, many congratulations. Could you elaborate on the Discover Football Beyond Borders festival, experiences of the participants from TWS and its overall significance in your journey?

Ans: The Beyond Borders soccer festival brought together teams from nations around the world and mixed the players up onto new teams. The aim was to transcend political, religious and social differences. The Tibetan delegation's attendance marked the first time that female Tibetan athletes ever competed in an international event, and the first time Tibetan athletes of any sex have competed with Chinese athletes post-1959.

2. You had mentioned that it was challenging for the women players to go abroad and participate in a festival of this nature. Would you be able to highlight a few challenges that they overcame?

Ans: There were so many challenges that our team had to overcome! First, the team made the decision to break away from the Tibetan National Sports Association. Just a few short months ago we were told that the team could never travel abroad by them. That statement was one of the catalysts that led to our declaration of independence. Now, Tibet Women's Soccer is an independent association. Soon after, we received the invitation to attend the Beyond Borders festival. Then, a whole new set of challenges presented itself. First, we had to collect all the proper paperwork to obtain Indian return visas and German visas. It was a very challenging process, and all the players participated in it. Miraculously, we managed to get it done just hours before it would have been too late. Meanwhile, we had to keep the entire process secret, as we did not want to alert the Chinese government. If they found out that a team representing Tibet was going to be attending the festival, they might try to prevent us from coming, or prevent the Chinese from attending. Only when we had successfully passed through immigration at the Delhi airport and boarded the plane did I send out the press release announcing the tour. Our tactic worked, and we made it to Berlin, along with the Chinese team.

3. How would you explain the act of playing football to be deemed as a political act? It would be interesting to look at it through the gendered lens.

Ans: For Tibet Women's Soccer, football is definitely a political act. These young women have been told not to play football. They have been told that football is important for boys, and not for girls by leaders in the community. Their progress has been blocked and stifled in many ways by the people in charge. But when these young women made the decision to play football despite all the opposition, it is very much a political act. They are exercising their right to self-determination, and proving that they are capable of doing anything that a man can do, and that they don't need anyone's permission to do what they love and follow their dreams.

The other political angle is sports diplomacy. The Tibetan political struggle has experienced very limited success in recent years. Politicians and activists continue to work towards freedom, but the situation is at a stalemate. Sports have the ability to bridge divides that politics can't. Much like the Ping Pong Diplomacy between the USA and China back in the 1970's, Tibetan athletes have the opportunity to initiate a new form of dialogue with Chinese and the rest of the world. Every time a team walks onto the pitch wearing the Tibetan flag on their jersey, it's a political act. It says, "Tibet is a country. We are Tibetans. And we are representing 6 million others still inside Tibet who don't have the right to bear this flag." When our team met the Chinese team in Berlin, these brave and insightful young women overcame decades of fear, hatred and terror, and reached out with an olive branch in friendship to these innocent Chinese footballers, and showed the world that Tibetans and Chinese can get along and find common interests and passions.

4. In the larger debates on patriarchy, how would you locate TWS in this space? Could you provide a case or two on certain transformational journeys of Tibetan women, who have braved multiple layers of marginalisation with respect to their own identities? How do you think has this sport enabled them to exercise their rights in today's time and circumstances?

Ans: There have been several instances when the TWS players have been told that should not and cannot participate in our various events and activities purely based on the idea that football has no value in the lives of women. Despite the strong influence of others' opinions in the society, the players were able to reflect and look deep within themselves, seeing beyond the limitations projected onto them by certain elders, and recognizing that for them,football has a tremendous value. Taking that brave step and showing up to play anyway is preparing them to overcome all kinds of challenges in their lives, and empowering them to decide for themselves who they want to be and what kind of mark they want to make on the world. This is producing strong, confident Tibetan women, which can only benefit the society at large and contribute to the progress of the Tibetan freedom movement.

5. What is the kind of response that TWS has received from both, national and international stakeholders? This could also be looked at in terms of funding options.

Ans: The international community is responding to our progress with a huge wave of support. We have supporters all over the world now, and are attracting both individual and corporate sponsorships. Within the Tibetan community we also receive a lot of moral support, mostly from the common people. There has been a fairly strong response from Tibetan living in the West, too. However, I'd like to improve this aspect of our support network, and receive more tangible support from within the Tibetan community.

6. Within the existing framework of the politics in Tibet and the Tibetans-in-Exile, (A) Where does TWS stand? (B) What does the future hold, according to you, for the women soccer players and the sport at larger?

Ans: TWS upholds the belief that Tibetan women are the greatest untapped resource in the Tibetan political cause. We are striving to create an environment that provides the tools and skills for our players to formulate their own opinions, beliefs and ideas and express them with eloquent confidence in the community at large, in time becoming societal leaders themselves. It's safe to say that now we have broken through a major barrier within the society, and that from now on Tibetan girls will have the opportunity to play sports in exile. I think that at this point, no one can hold them back anymore. Within a few years we hope to field Tibet's first women's national team, and continue to represent Tibetan women at soccer events all over the world. I hope this will spread to other sports as well.