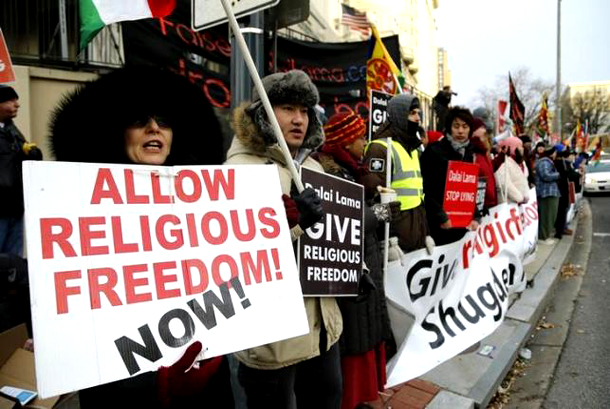 Dharamshala — After years of speculation and denial, the Buddhist sect leading international protests against His Holiness the Dalai Lama has finally disbanded all activity and websites, according to a statement on its website.

The announcement came after a Reuters investigation revealed that China's Communist party backs the International Shugden Community and is responsible for the protests that have followed the Dalai Lama internationally.

The message on their website reads reads, "The Directors of the ISC previously announced that from Dec 1, 2015 they had decided to completely stop organizing demonstrations against the Dalai Lama. Now, from the March 10, 2016 the ISC itself will dissolve, including its websites."

His Holiness the Dalai Lama told Reuters, "I am aware of the decision by the ISC to disband."

"Your article was something complete, holistic sort of presentation, it was very helpful," referring to the Reuters investigation on Shugden's ties with China.

Protestors are members of a sect that worships Dorje Shugden, a deity in Tibetan Buddhism. "I myself also worshipped that," the Dalai Lama said, referring to the deity. "Out of ignorance," but he came to the realization that the deity was "very negative, very harmful," he said.

Dorje Shugden devotees accuse the 80-year-old Nobel Laureate of persecuting them and dividing Tibetan Buddhism, going as far as calling him a fake and bigot.

The Tibetan spiritual leader has said repeatedly that it was his duty to explain why he had stopped worshipping the Dorje Shugden deity. "Whether people listen or not is up to them," he added