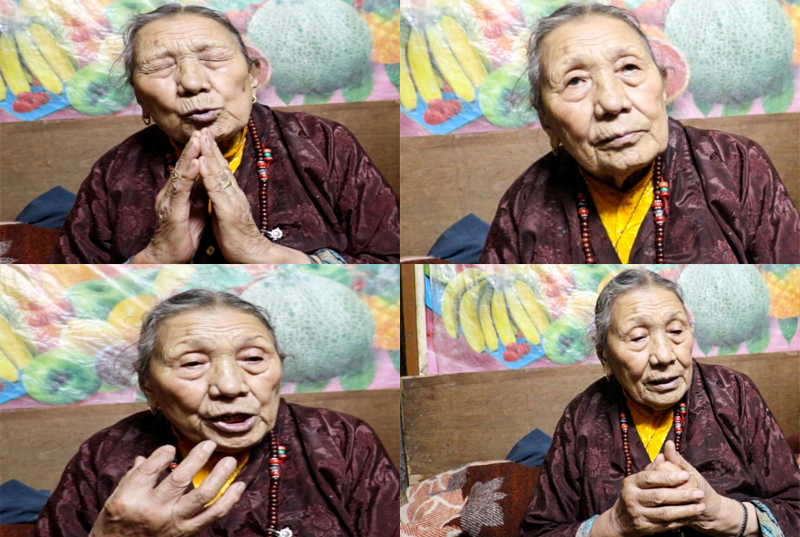 Dharamshala — Ama Adhe, one of the few Tibetans who survived to tell the stories of torture by the PRC, told Tibet Post International about her life in prison and her political views on Tibet.

Adhe was born in Nyarong, Kham Province, in 1928. She led a peaceful nomadic life until the Chinese occupation of Tibet. Her personal tragedy began in 1958, when her husband was poisoned by the Chinese authorities, who considered him a nuisance. Shortly after, her sister was arrested, publicly humiliated and executed at the public square to “set an example.” Several months later, Adhe herself was arrested alongside 300 other women at a protest against the Chinese rule. Out of these 300 women, only 4 survived the severe starvation and forced labour brought upon them in prison.

On the day of her arrest, she was accompanied by her 4-year-old son. She told TPI, “when the Chinese police arrested me, my son clung on to my leg and cried but the Chinese kicked him away and I never saw him again…”

She recounts that the arrested Tibetans were assembled in an arena and the people were told to watch them as the Chinese shouted, “look at them, who’s the winner? Bring the Dalai Lama or the prisoners will be massacred!”

“I was beside my brother-in-law, Pema Gyaltsen, during this ‘show.’ We had signs around our necks but I could not understand the Chinese things written on them, I could only see that on Pema's there were letters in red, indicating that he would be executed that day. In the midst of all this, the Chinese leaders sang and danced and suddenly two shots were fired at Pema’s head. He was killed and I had blood and bits of his brain all over me,” Adhe tells TPI.

During Adhe’s time in the Chinese prison she was not given any real food. She said, “[the Chinese] would offer us half a glass a day of what they called corn gruel but it was actually just a watery mix. Under such starvation, we started eating our leather shoes, which helped us a lot.”  Naturally, after 3 years under such circumstances, many people died.

The 4 women left were then transferred to another prison called Dhartsedo, based in Tibet. There they were not starved but instead, were beaten and tortured in other ways.

“One day, the 4 of us who had survived, were taken outside. There were many people there but we couldn’t recognize anyone. The Chinese were laughing at us and saying things as, ‘12,000 prisoners have died, all the mean and bad people are dead,’” She tells TPI about the day she was transferred to the prison in Tibet.

“We were beaten when we refused to say that His Holiness the Dalai Lama was bad. I swear [the Chinese] inserted needles on my finger tips, I was many times slapped and my right ear became useless. If anyone did not obey them, they would tie our hands like this [puts hands behind her back], hold us up and light a fire below us. As smoke started coming out, a handful of chili was thrown over it. This made the victims unable to breath and lose control of their bladder,” Adhe said at another interview with the Tibet Oral History Project.

Adhe explains, also at the interview with the Tibet Oral History Project, that “the Chinese plan was to kill all the Tibetan political prisoners, educate the young children and convert them into Chinese. Wipe out the Tibetan race. Then the Chinese could lead with no Tibetan people. The little ones would not know and the adults would be dead. They were overjoyed."

One day in 1985, Deng Xiaoping, the paramount leader of China from 1978 to 1989, as part of his many reforms, announced that all political prisoners were to be freed.

At first, after her release, she called for the independence of Tibet. She supported groups such as the Tibetan Youth Congress and the Tibetan Women’s Association, all who called for complete independence and who were not in favour of the Middle Way Approach, proposed by the Central Tibetan Administration.

“At the White House in Washington DC, speaking in a video, I raised my hand and shouted ‘Complete independence for Tibet,’” she shares.

However, after speaking to the Dalai Lama at various occasions, she changed her mind. Adhe now calls for the Middle Way Approach, a non-partisan and moderate position that safeguards the vital interests of both the Chinese and Tibetans. If attained, it will insure the protection and preservation of Tibetan culture, religion and national identity and the Dalai Lama would be able to return to his homeland – the main desire of many Tibetans today. The Middle Way Approach would simultaneously offer the Chinese the security and territorial integrity of the motherland.