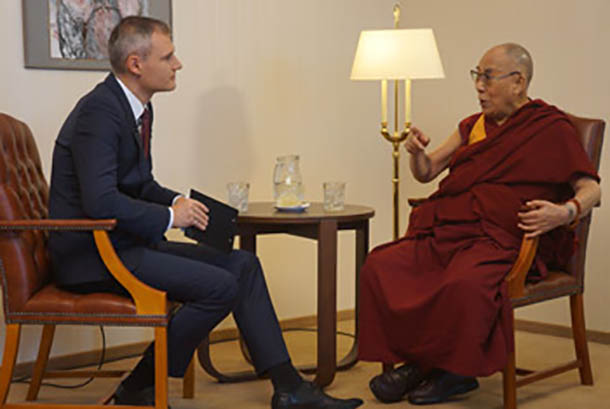 Bratislava, Slovakia — Stressing that the use of violence only leads to more violence, The spiritual leader of Tibet, His Holiness the Dalai Lama said the only way to solve problems is through talk and dialogue.

Lubomir Bajanik of Slovak TV opened his conversation with the spiritual leader of Tibet, His Holiness the 14th Dalai Lama by asking what enables him to smile and to seem so happy all the time.

“Peace of mind. I always try to look at things from a wider perspective. Looked at from different angles, problems don’t look so severe. I’m committed to contributing to making a happier, more peaceful world, so it’s better to be optimistic," His Holiness told Mr Bajanik.

“Each of us has to make an effort to create a happier world. At this moment in Syria for example people are facing tremendous suffering. Because of the real dangers they face, many are becoming refugees. Many European countries, Germany in particular, have done well to provide them shelter," he said.

"It’s appropriate to offer them refuge, to provide education to the children and training for the youth among them. However, just as important is to work to restore peace in the lands they are fleeing. Eventually they should be able to return to help rebuild where they come from. The majority of us Tibetans who are refugees still hope to be able to return and restore our own country one day.”

Bajanik asked if the crises in Iraq and Syria can really be solved through non-violent means and His Holiness answered that the use of violence only leads to more violence. The 20th century saw immense violence and the imposition of tight control in many places.

In the end, the only way to solve problems is through talk and dialogue. In the long run he said he looks forward to a demilitarized world. And the first step, as one of his Nobel Peace Laureate colleagues declared is to stop the trade in arms.

Asked about the prospects for a reconciliation of the issue of Tibet in his lifetime, His Holiness recalled that it was the Chinese imposition of reforms from 1956 onwards that provoked a revolt in Tibet. In 1959 he was left no option but to escape.

The Tibetan leader the reporter that he conceded that he had found Marxism attractive and felt that to begin with Chinese communist leaders were dedicated to serving the people. After 1956 and ‘57 however power seemed to have spoiled them. Nevertheless, he said, the last 40 years have seen great change.

As to whether he sees a future for Tibet as a democratic country, His Holiness observed that since his childhood he had felt there was much in the old system that needed to change. After taking responsibility for Tibet he set up a reform committee, but the Chinese opposed it because they wanted changes to be done their way.

The Nobel Peace lureate told the Slovak TV channel that the exiled democratisation began in early 1959 with the establishment of the Tibetan Parliament in Exile, a process that culminated in His Holiness’s retirement and devolving political responsibility to the elected leadership in 2011.

When Bajanik asked how to achieve happiness in a violent world, His Holiness told him we need to learn how to deal with our destructive emotions and conduct ourselves with honesty, transparency and warm-heartedness.