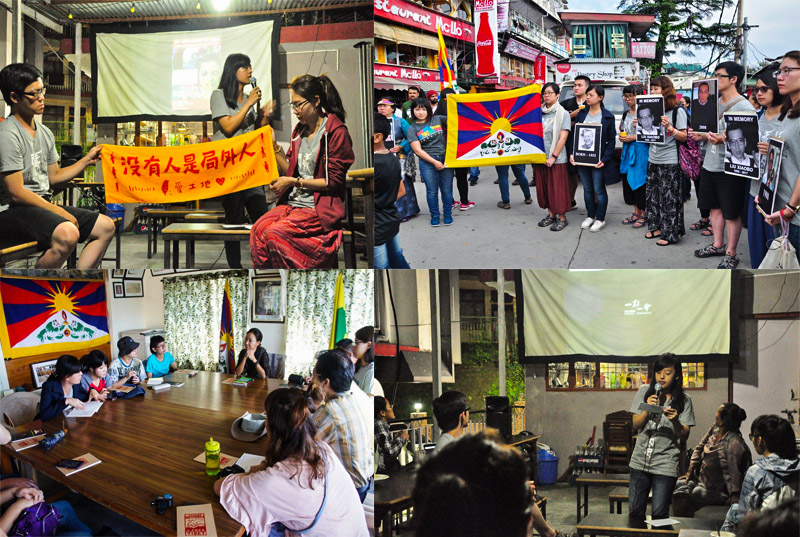 Dharamshala — "Now that I am here and have interacted with a lot of Tibetans, I have come to realize that Taiwanese and Tibetans have a lot of similar issues to deal with in regards with China. I have deeply come to realize that even with different cultural and traditional backgrounds, we aim for the same target. We go through similar struggle with education, language, cultural, territory etc," said Chen-Yen Chou, a Taiwanese Human Rights and International Politics student visiting Dharamshala during an interview with TPI.

TPI Reporter Tenzin Zompa interviewed a group of 16 Taiwanese from Students for a Free Tibet Taiwan, on July 25th, about their two week trip to Dharamshala, and their views on Tibetan culture and tradition. The groups visit was from July 9th through July 27th.

Asked what made them want to visit Dharamsala and if visiting Dharamsala and understanding more about Tibet’s freedom struggle made them re-think about China’s occupation of Tibet, first to answer was Chen-Yen Chou, a Human Rights and International Politics student from London, who said, "To know more about Tibet’s political conflict with China. And now that I am here and have interacted with a lot of Tibetans, I have come to realize that Taiwanese and Tibetans have a lot of similar issues to deal with in regards with China. I have deeply come to realize that even with different cultural and traditional backgrounds, we aim for the same target. We go through similar struggle with education, language, cultural, territory etc."

Wen Chih said, "In 2011, I went to Tibet and it was around the time when Xi Jinping was going to be the president of China. I have seen him make lots and lots of changes in Tibet which all leads to diminishing how Tibet really is and how it really looks like. I faced huge pressures from Chinese police when I travelled from one place to the other. Tibet was filled with tourists and I couldn’t really see the real authentic Tibet in Tibet itself.

"But this trip to Dharamsala has been very emotional to me. I got to witness and experience the exile life of Tibetans here in India. I never thought I would be able to see it.

Several others who also addressed this question had similar answers, that they now have a deeper understanding of Tibetans and their exile life and the emotional struggles they go through every single day. All of them also joined with the Tibetan masses when yesterday, 25th July at 7am, the body of Pawo Tenzin Choeying was brought to Dharamshala. A lot of them weeped for a long time even after they got back to their hotel rooms. Because they said it was hard for them to imagine someone taking his or her own life for the sake of their country. Its even harder to see a boy who is only 19 years old do that. Its really courageous and they have deep respect for him.

Wan said, "the mother of the deceased says she is proud of what her son has done for Tibet. Its breaks my heart to see her say this because deep down I know that she grieves so much for the loss of her young son who she has brought up with lots of love and care and now he is no more. There sure is this invisible pain and tears in her. Hearing a mother say these words is hard to hear."

When asked what has been the best part of this trip so far, Wen Chih said, “the language barrier with the Tibetan locals couldn’t stop me from understanding the Tibetans I saw everyday. Their eyes could speak it all so loud and clear. Every morning I go around Tsuklakhang to circumambulate and a lot of times I meet the same people I met yesterday and before. So now I don’t need a voice to understand them. Its all so clear through their eyes and I'm amazed to have such an amazing experience with them. I feel like I was a Tibetan in my previous life. Other than this, I absolutely love the weather. It has been changing every now and then. Its like nothing is permanent if we connect it to Buddhist’s teaching."

Yiliang said “the biggest thing that surprised me by Tibetans here is the attitude they carry with their enemy and problems. The non-violent way of dealing with China or with every small thing is very impressive. Because in Taiwan, whenever there is a protest, we would always think of ways to harm the opponent. Everyone would be ready to beat them up. Tibetans never force others to accept their ideology. They don’t mind if someone doesn’t agrees with their point. Its something I will always remember."

Then, asked what is their opinion on His Holiness the Dalai Lama's teaching and spreading the knowledge of Buddhism around the world, to which, Yunting, a history and sociology student in Taiwan said. that even though she is an atheist she can still understand and agree with the knowledge and wisdom of Tibetan Buddhism. What she learned from the Tibetans here is empathy that can be seen in every Tibetan people.

Yu-Jou, who currently volunteers at SFT said that while they didn’t have the opportunity to have a personal audience with His Holiness the Dalai Lama, she feels like she knows him through all the Tibetan people she spoke with. They all speak about his advice and teachings. His teachings on love, compassion, and the purpose of life being happiness. She said what impressed her the most is that His Holiness the Dalai Lama makes the meaning of happiness sound so easy and not complex at all. And the fact that His Holiness respects all the self immolation but does not encourage it makes her rethink everything about self immolation and the meaning of life.

She then said “Tibetans hold back their tears during funerals because they believe that shedding tears will disturb the soul of the deceased one. That really kind of changed me from deep within. Staying strong while facing problems in life is what I learned from them and I will always remember and try to practice it whenever in my life.”

Chen-Yen Chou said “To me, I see His Holiness the Dalai Lama as someone to whom we can throw all of our problems and he would take care of it all with no complaint. Not only Tibetans, he takes care of all people in this world and even Chinese as well. I see him as the biggest support system with great respect.”

Chime, co-ordinator of this group shared her experience as well, saying, “its my fourth visit to Dharamshala, the first time is in 2009 when I finally saw the real map of Tibet. The map of Tibet that I saw in Taiwan is completely different. 2009 was also around the time when 2008’s Beijing Olympics finished and when self-immolation among Tibetans had just started. It's 2017 today and its been almost 10 years now, but the self immolation has not stopped. It still continues and its heart breaking to see this.

"Moreover, what I envy about Tibetan people is their sense of identity. The identity of being a Tibetan is very strong among Tibetans . Not only this, the idea of serving and giving back to the community is also something I can see in every Tibetan I have met. I don’t get to see such deep conviction in my people."