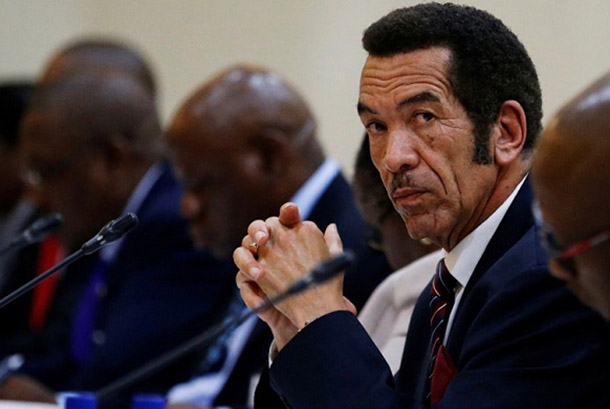 "We are not your colony," was the money quote of Khama's account of his diplomatic standoff with China in recent weeks. The 82-year old Nobel Peace Prize Laureate was set to visit the capital Gaborone for August 17 to 19, as part of what Botswana officials dubbed a "purely private" visit organized by the NGO Mind and Life Institute and the Botho University. Still, Khama was set to meet with the spiritual leader of Tibet, riling the Chinese communists.

"They told me things like the ambassador may be recalled, it would damage relations between Botswana and China that they would as China engage other African states to isolate Botswana," Khama said in the Aug. 17 edition of the Botswana Guardian newspaper.

In a no holds barred interviw this week with the Botswana Guardian President Ian Khama reveals for the first time details of how China engaged in intimidation in its efforts to block the Dalai Lama’s visit to Botswana.

President Khama wished the Dalai Lama a “speedy recovery” from the exhaustion he suffers, after which the exiled Tibetan spiritual leader is “welcome to come and visit Botswana.”

Khama was speaking to Botswana Guardian in an exclusive interview following weeks of claims and counterclaims over the controversial private visit of The Dalai Lama to Botswana at the invitation of American-based Mind & Life Institute, which culminated into an ugly diplomatic row between China and Botswana.

He was expected to be the keynote speaker at a dialogue on ‘botho’ and spirituality facilitated by the institute this week. However, the trip was cancelled at the eleventh hour on the advice of doctors that the 82 year old should not travel long distances.

“So we assume he will make a speedy recovery and once he has recovered, he is of course welcome to come and visit Botswana,” Khama said.

Botswana was put under tremendous pressure not to allow the Dalai Lama to visit, but the land locked Southern African middle income country would not budge.

In an exclusive interview with the Botswana Guardian, President Lieutenant General Dr Ian Khama revealed why his government was willing to extend hospitality to the Tibetan spiritual leader.

“We allowed him because the Dalai Lama has not done our country any harm and China’s enemies are not Botswana’s enemies,” he said.

Khama said this week in his office, “we stood our ground because Dalai Lama has not done Botswana any harm. We have numerous applications from that part of the world for people wanting to come to Botswana to visit for one reason or the other, and in his case, we have absolutely no reason to deny him a visa to come and visit Botswana to attend and preside over a conference which actually goes along with our principles re le Batswana of “Botho”.“So to try to spread that message to as many people around the world as we could through a conference like that we have of course supported so that is why we allowed him and others to attend, and like I said he had done us no harm and we have no reason not to allow him to come to Botswana”.Commenting on the fact that China is opposed to the Dalai Lama visiting any country and that does not exclude Botswana, Khama said that China’s enemies are not Botswana’s enemies.

“Yes China spoke to us, they spoke to anybody under the sun to try to undermine this government, undermine the Cabinet. They were using time to get to Ministers, Members of Parliament, and my own relatives, everybody you can think of to try and prevent the Dalai Lama coming here.

“They even invited a group of Batswana to go to China to try to reinforce that, hoping that when they came back here they would write stories or ask questions in Parliament about why the Dalai Lama is coming here, things that they would not allow in their own country,” he said.

Khama took a potshot at the Chinese government saying, “It is ironic that in China where you do not have the freedom of the Press, they would then take advantage and acknowledge that actually we are a free and open society where the Press is able to operate to use them against us in trying to find reasons to condemn.  “So yes, they (Chinese) engaged in intimidation, they told me, and they told other people things like the Ambassador may be recalled, it would damage relations between Botswana and China, that they would as China engage other African states to isolate Botswana. You can imagine that as far as we are concerned we are not amused by such threats, nor are we going to be intimidated or moved off our path”.

The president drew similarities in the current situation to what applied during the Apartheid era. “You will remember many years ago during the days of Apartheid South Africa when we allowed ANC, SWAPO, Frelimo cadres and the liberation movements from Zimbabwe to come into Botswana, we would be threatened by Apartheid South Africa that if we allow those people to come in or if we did not hand them over they would carry military action and economic blockades.

“They went over for several years those threats, and they carried them out if you would remember, they raided us, they blockaded us but we stood firm as Botswana in principle that no we are not going to allow ourselves to be bullied, intimidated and threatened, we would stick to our principles and allow those people to come here. So similarly, we were not a Bantustan of South Africa to do their bidding nor are we a colony of China. We are an independent sovereign country we can allow whowever to come in. Whoever has problems with China does not mean to say we have problems with them either”.

And Khama told BG News that Ambassador Zhao Wanbo came to him and said really surprising things. “For example initially he was trying to give the history of our relationship and then he would go on to say how they were keen to engage with us with our development agenda; how he has spoken to the Chinese business community resident in Botswana that Botswana is not like other African countries, here we do not tolerate corruption, we got labour laws and they must abide by.

“That surprised me because it seems that they were singling us out that they sort of have an arrangement  whereby and, or an idea that if you are in an African country you can engage in corruption and violate laws, but here in Botswana it is not tolerated. I just found that unacceptable. He talked about how it would damage the relations; he was the one who told me that his government may recall him and so on and so forth.  Khama revealed to this public that in his response he asked the Chinese Ambassador “if any country that allows Dalai Lama in is assumed to be supportive of Tibetan  Independence? I looked to him in the face and I said to him, I am telling you  as the President of Botswana, the Dalai Lama coming here has nothing to do with Tibet. If you want to come up with that story, that is up to you. But do not impose that conclusion on why we are allowing him to come to Botswana because it is not true”.

But still that was not enough. Khama said the Chinese continued “undermining us in the underhand way in trying to get him (Dalai Lama) not to come.

But as you can see, we decided despite the fact that we would continue he would go ahead. It is a pity and disappointing that he has not been able to come because we were informed that he has been advised by his doctors not to travel long distances right now”.

Khama not worried by China threats

is a man not to be intimidated. He is not worried about China’s threats. Asked on the implication of his position to this country, Khama stood his ground. “Like I said during the times of Apartheid South Africa, we were pretty much surely dependent on Apartheid South Africa in those days when it came to trade. But, then the thing is, if you allow yourself to be bullied and intimidated by bigger powers to do what they want us to do, then we are not an independent and sovereign country that has a principle.

“If  that is how, they( China) are going to conduct their relations through gunpoint diplomacy, then we just have to say, are we now surrendering our sovereignty  to whoever can come along and say Botswana do this, do that or else we will take  this kind of action, where will we be?

“So, what we have fought for for 50 years, what we were proud of for 50 years, we have been independent, we are not going to abandon  that. So I think I am very strong and firm about that one. And in any way, the way we are going about diversifying our economy from time to time, even recently when we were in a recession, when we saw the commodity price downturn, there was a couple of times when we did not sell a single diamond to anybody whether it is China, USA or anybody, we had two very bad months. But we survived, so if they want to take those actions against us, but you know at the end of the day we cannot do to China what they can do to us, but there are things we can do”.

Khama declined to name the things we can do saying, “I would rather not state that, but I would say we are waiting and watching to see what they will do and then we will respond”.

However Khama thinks that now that the Dalai Lama is no longer coming, “they will probably tone down, but like I said, it is possible that he will still come because for now, it is because of his health and as soon as he has recovered it is likely that he could and I am saying he will be welcomed to Botswana”.

Asked about his take on the fact that some Batswana were critical of the Dalai Lama’s visit and what would little Botswana do if China was to act, Khama said, “it is the same as what would have happened during the days of South Africa, there were people who had those concerns as well. Like I say we have to decide whether we are a colony of China or we are an independent Botswana”. About his relationship with the Chinese Ambassador, the President has not really had much dealings with the Chinese President, but stated that the Chinese Ambassador is a very pleasant person.

“I have met him a couple of times, I sometimes wish he had been here earlier because maybe we would not be where we are today. But I just want to indicate to you that in all the years that I have been in government, no single Chinese Ambassador has ever brought to my attention the issue of Dalai Lama, they would talk of Taiwan as it affects the One China Policy.   “The Dalai Lama never came up, but even if they brought it up, it would have not made any difference, because like I said the decision was based on principle and not based on whether China likes it or not”.