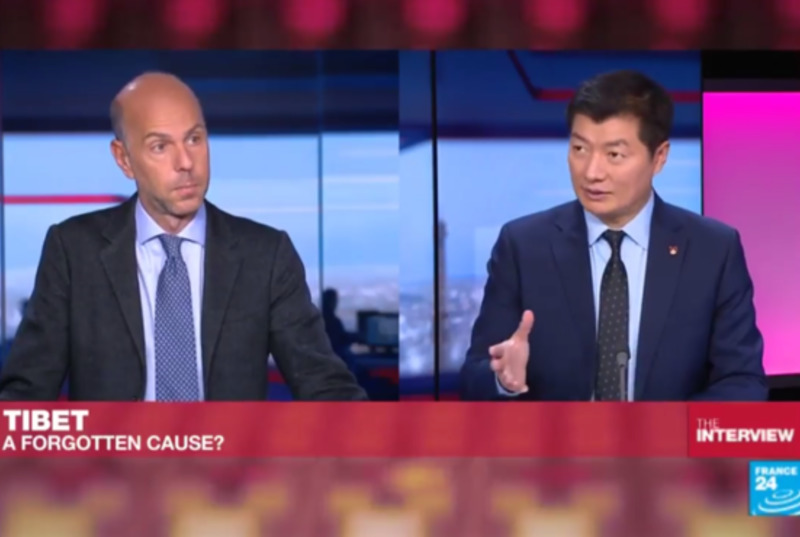 The full interview between FRANCE24 Interview's anchor Mark Perelman and President Dr Lobsang Sangay can be read below:

Mark Perelman: "This year marks the 60th anniversary of the departure of your spiritual leader the Dalai Lama in to exile - this is when China took control of Tibet back in 1959 and like many Tibetans he eventually settled in neighboring India, where you were born. Obviously, the Dalai Lama has become the embodiment of the Tibetan cause for decades but in 2011 he relinquished his political powers to focus on spiritual matters. There was an election, you won, you were then reelected. There are some obvious questions, as after 60 years with China's rising economic and diplomatic clout, many people think that the dream of Tibetan autonomy is as far away as its ever been."

President Lobsang Sangay: "I think I would disagree with that, because if you look at the 1950s and 60s, when our country was occupied -even through the 70s, hardly anyone talked about Tibet. But then came the 80s and 90s, and here I am 60 years later standing here in your studio, traveling around the world talking about Tibet means we are still alive, we are still standing, the fight for our truth and justice is still on. And yes, China is rising and its influence you can sense --

MP: Do you sense it when you travel? Do you sense the influence of China in the behavior of foreign leaders who might be willing to preserve their ties of China and therefore won't meet with you?

LS: Yes, I can sense it. There are some who shy away from meeting you, some who shy away from speaking of Tibet. And there is a government of China condition so if you sign a free trade agreement with say Norway or Denmark, or any European country they put a condition not to talk about the three Ts - Tibet, Taiwan, and Tiananmen Square, so you can clearly sense it. But at the same time there is a sort of backlash or remorse because if you go to Australia now, they have put a bill in the Parliament to prevent or constrain foreign influence - especially China's. So that is also happening, and there is a growing element in the international community because as China is growing they want to know what is China? So, hence the Tibet narrative is very relevant, very important. So there is a new audience that is coming and that is where we have to take advantage of and be out there in the international community.

MP: Do you fear that even in countries where you and the spiritual leader have been received, for example in the United States, the Dalai Lama has been received very regularly there might also be a change? There were concerns that the Trump administration decided not to fund assistance to Tibetans, while we haven't heard Donald Trump on the issue and it would be a reverse of his predecessors, could that herald in a bad change for you?

LS: Ultimately, the Tibetan cause is the Tibetan peoples' cause and as long as you are preserving your identity and pursuing your goal, that will determine the outcome. Tibetans inside and outside of Tibet, their sense of unity and solidarity is very strong. As far as President Trump and the question of allocations of funds for Tibetans and Tibetan related projects, there is a bit of a misunderstanding, as Tibetan funds have often come from the Congress side so I know in the House and the Senate the draft bill they have of appropriations, the language is that the funding should be giving no less than last year. So if the budget is negotiated we will receive the same as in the past.

MP: Right, from Congress. But do you fear that in the White House there is someone who is not as favorable to your cause as his predecessors

LS: My sense from DC is that they will be quite hawkish on China, as lately President Trump imposed a 30% tariff on solar panels and refrigerators, clearly targeting China. Now there is a growing realization that China is competition and the US has to deal with that. Hence, Secretary of State Rex Tillerson and the Ambassador to China have raised the Tibet issue with China.

MP: But of course you would like to see it more at the forefront?

MP: Is there an invitation that you're waiting for?

LS: It is never negotiated or talked publicly.

MP: Sure, well in Tibet, since Xi Jinping has arrived, he is clearly the most powerful leader of China in a long long time.What is his policy vis a vis Tibet? Is he willing to negotiate anything? Is there any hope that he might continue negotiations or does he want to fully control Tibet with no talk of autonomy?

LS: If you look at Xi Jinping's term the last 5 years, the situation in Tibet at a micro level has gone from bad to worse. The destruction of Larung Gar Monastery, where it went from 12,000 monks and nuns to 5,000 monks and nuns, and where 3 nuns committed suicide. Yangchen Gar nunnery where there are 6,000 nuns is being demolished as we speak. 151 Tibetans have committed self-immolation- burned themselves- since 2011. Then there is the grid system, the secularization. Even the Freedom House index shows that Tibet is the least free region after Syria. Reporters Without Borders says that for journalists getting access to Tibet is more difficult than gaining access to North Korea. So clearly you can see how the in Tibet has gotten worse under Xi Jinping.

MP: So he doesn't want to negotiate you don't think?

LS: We remain hopeful. As Buddhist we are optimistic, and we hope that in his second term which will begin in March of this year, he will relook at Tibet issue and realize that hardline policies do not work. More and more Tibetans are protesting, there is a increasing resentment, hence liberal policies should be implemented. His father's good friend Hu Yaobang had a very liberal approach towards the Tibetan issue.

MP: Is this just hopeful thinking or from your indirect interactions with Chinese leaders do you sense that this could shift? Because as you described this is not currently the case.

LS: As Buddhists we believe in impermanence.

MP: But what about as a politician?

LS: As a politician, we should also remain hopeful. The ground reality shows more repression, but we still hope that in Xi Jinping's second term that he will see Tibet as a low hanging fruit and solve it.

MP: There is a lot of concern over the health of the Dalai Lama. He has announced that he is cancelling his international trips as its too tiring for him and the question of his succession is always raised and how China will react. But I want to ask about the Middle Way Approach which was adopted to seek autonomy and not independence, could be in jeopardy if China doesn't change course or there is a succession fight that some Tibetans might say we have tried autonomy, and it hasn't worked. Let's try independence, and maybe violence will ensue.

LS: Violence is futile. I think Middle Way is the right choice.

MP: Well many groups or countries or regions are using violence to pursue their goals.

LS: Yes that is true but we always feel we are the good guys, our movement is a role model

MP: But the youth may become impatient, and there are groups like this already saying that you are going nowhere.

LS: There are youth who are saying that we're not going anywhere, but no youth or student organization are advocating for violence - it is futile. We will pursue non-violence. Middle Way is approach is the policy to seek genuine autonomy inside China within the framework of the Chinese constitution. The White House has applauded and supported the MWA and here i am in European capitols appealing to leaders to support the MWA as well. In fact, for France the MWA is related to the Strasbourg Proposal, when His Holiness the Dalai Lama came to the European Parliament in Strasbourg and announced his proposal and actually for Tibetans the Strasbourg Proposal is very well known. I hope that the French government and leaders will take ownership like a mother and support the Strasbourg proposal.

MP: The new President Macron back in September 2016 met the Dalai Lama, he was not President, he wasn't even a candidate and since then, he just went to China for a very important meeting, he said I'm not going to talk about human rights because it's not productive, he hasn't made any plans to meet the Dalai Lama. Previous French Presidents clearly avoided it, at least publicly, so isn't that a perfect illustration of the difficult situation you are in, people when they are not in power are very happy to have their picture taken with the Dalai Lama, and once they are in power they forget about him and the Tibetan cause.

LS: The fact that President Macron met with His Holiness the Dalai Lama before shows that he is a person of conscience and is a good guy. But given the protocols and position of his current job, obviously there are complexities and we understand that.

MP: If he says he is going to China every year, how do you expect him to defend your cause?

LS: I hope he will use his office like Chirac and Mitterrand, and influence the Chinese government to negotiate on the Tibet issue, as these previous French presidents have played a crucial role in initiating the previous envoys of the Dalai Lama going to China and having dialogue with the Chinese counterparts. So I hope that President Macron in his annual visit to China will nudge Xi Jinping and play his role in the Strasbourg proposal which has a French name and take ownership and be like a mother to a son for Tibet.