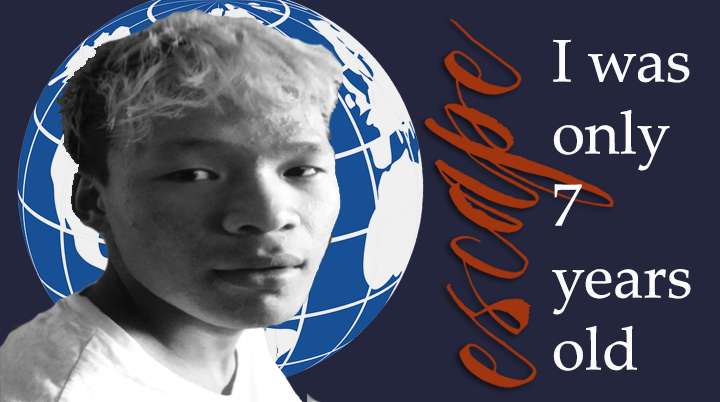 Dharamshala, India — TPI Reporter Dawa Tsering met with Ngadar, a young Tibetan man, for an exclusive interview about his personal story of escape from Tibet into India in 2005. Ngadar who trudged across the Himalayas to seek political refuge in another country was only 7 years old at that time.

Q1) When did you came to India and what let you to come here in India?

A1) I escaped to India on 23rd April 2005 with 20 other peoples whom I never seen before but are all Tibetans, same like me seeking for new light in their life. Surprisingly, the seven of them are elders and one among them is monk. Until then I thought I was only going there for studying purpose but after seeing those elders I realised there is something more serious issue behind that matter. As I was only 7 years old at that time and so have not much idea about the actual reason but now I learned here in India about what happened to us back in that time.

Q2) What happened after reaching India to you?

A2) From the refugee camp at Nepal, I was send to TCV, Gopalpur School and over there, I completed my 12th(high school). Since I was bit weak in studies and too my family economic status is not better in Tibet, I didn't pursued farther study and start doing manual jobs at Tibetan restaurants at Dharamsala and Delhi during past 4 years.

Q3) What differences did you felt in your life in India as compare to your life back in Tibet during childhood?

A3) In India, I could say that I am lucky enough to get education and every facilities without any cost under the care of His Holiness the Dalai Lama. I even see Tibetans in India are more mobile and exposing because of the freedom which we don't have that in our own country. Moreover, I always feel safe and someone's presence even without having any relative in India because of support from our spiritual leader. Politically, I am sure the difference is huge but in fact, I couldn't compose the likes story since I am not actually clear about what happened to us as I am very young and knows nothing at that time.

Q4) What do you have notion about the current political issue of Tibet?

A4) As a common Tibetan, I always supported and admired the every fight about Tibet issue with both physical presence or not, whether the fight is persuasive or not. According to my own thought, I never believed that we could be the same or have the same that we have back before 1959, but I am guaranteed that through the fight, we could at least improve our circumstances. I prefer the middle way approach over free Tibet. In more specific, I argue our exile diplomatic to approach Chinese government over visiting foreign supporters since we need to carry more responsibilities by ourselves to seek goals.

Q5) What contributions did you have in Tibet issue and wants to make in your future life?

A5) Till today I am not actively engaged in massive fights but I took part in protest for several times, I don't know whether sharing posts about Tibet issue in social media are effective or not, but I always shared contents about Tibet issues in social media networks hoping to spread more awareness to the world wide. I am not sure does sharing contents really plays role in struggling of Tibetans but I believed that would make differences.