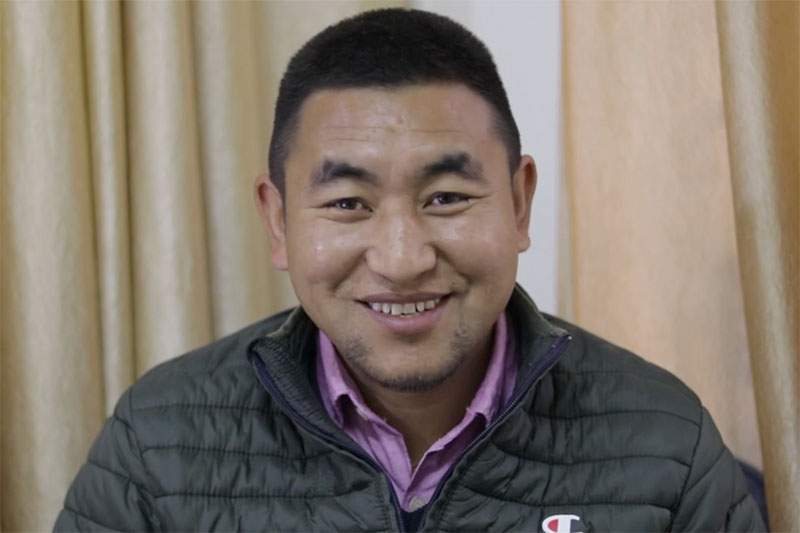 Dharamshala An interview with Norbu, the director of Learning and Ideas for Tibet Organization (LIT).  A Tibetan NGO based in Dharamshala,  Himachal Pradesh, India. Through the conversations, Norbu introduces the aspirations and contributions of this organization in the exile Tibetan community.

How this organization has been helping many Tibetans to get a free education without conditions and restrictions imposed upon them. Especially this organization’s contribution to spreading awareness about Tibet and bringing Tibetan cause closer to the international platform.

TPI: Would you please introduce yourself, where you work and what you do here?

Interviewee: first of all, Delek Tashi, I am Norbu. I came from Tibet in 1999 and studied in Suja School situated in Himachal Pradesh, India. I did my schooling till 10th grade in Suja School and joined Bylakuppe School in south India, Karnataka for my 1+ and 2+ as a commerce student. In 2008 I started my course in hotel management in Mangalore (south India) for 4 years.

TPI: When was LIT established and what were the goals before establishing the institute?

TPI: How do you bridge the gap for education?

Norbu la:  Usually if you know the language briefly, it will be very helpful in communicating with other people. And it has other benefits too. Since coming to another country and speaking only in Tibetan everywhere we go doesn’t help much. So we have courses like English. If one knows other languages, it will help in communication and spreading information about us to others.

We also have cooking classes. If one knows how to cook then we can at least have delicious food at home. As for health, we should know whether a disease is contagious or not, students will know how to take proper precaution. It will help them to be more careful and help others too.

TPI: How have the students been benefitted from this initiative?

Norbu la:  The benefits the students get are that when they apply for schools they need many legal documents as a condition. Here since they are Tibetans, without difficulties or problems of conditions, we create an environment for them to study. They can learn without conditions. If they could learn there is nothing else they need to prepare. They could come on time and learn. They need to pay fees in other institutions but here we provide free education for every Tibetan. I think it will be very beneficial for them if they take this opportunity.

TPI: Any day to day problems that you face here with the people studying here or from the authorities?

Norbu: There are no special problems but sometimes students come and sometimes they don’t.  Students going and coming during the class but I don’t consider as a big problem. There are no problems in the administration since everyone works together.

TPI: How many students have you currently taught or have graduated from this institution?

Norbu la: Right now we have around 30 students. We started our classes after winter vacation and goes on for two weeks since its commencement. By looking through the registration, we have educated more than two thousand students till now.

TPI: What is your vision in expanding this institution?

Norbu: Since 2008 we have done lots of works. Our primary work is to teach English to Tibetans and also teach Tibetan to western people. There are also classes to introduce Buddhism and art classes as well. We show real-life stories and Tibetan political prisoners' stories to western people.  From 2014 and 2015 onwards, there is a reduction in western people coming here and the decrease in Tibetans in Dharamshala.

Many Tibetan political prisoners migrated to the West so we have problems doing our works. As for now, we are focusing on teaching English more as I have mentioned before that Tibetans in Dharamshala are reducing each day. Besides we plan to do other things like helping poor Tibetans financially. It started 2 years ago and it may not necessarily be a financial aid. We have been carrying out this kind of programes so far.

Norbu: This is what our organization did for Tibet. Our organization’s name itself is Learning and Ideas for Tibet so as to spread awareness about Tibet to the outside world. Our foremost goal is to help Tibetans and educate them. Our second aim is to bring the Tibetan cause to international platforms. For instance from 2008 and 2016 as I have stated before, we screen documentary movies to western people.

Through these, we explain the situations in Tibet. Firstly we screen the movie and they take about one or a half hours of debate about Tibet. The problems in Tibet or problems are best known by the Tibetan political prisoners. We explain about political situation through English and we have done many works like that. As for the Tibetan language, we don’t specifically do much as we focus mainly on teaching English and other languages to Tibetans. We introduce Tibetan issues to people from the West in Dharamshala.

TPI: Any message that you want to communicate to the public?

Norbu: Our Tibetan situation is very critical right now. Whenever an opportunity comes for anyone like serving the poor Tibetans and working for any organization in society even if it is an hour, I request you all to spare time for it. Work keeping his Holiness’ teachings in mind and stay united. That’s all thank you.

This interview was conducted recently by TPI reporter Nikhil Kujur, in Dharamshala, India.