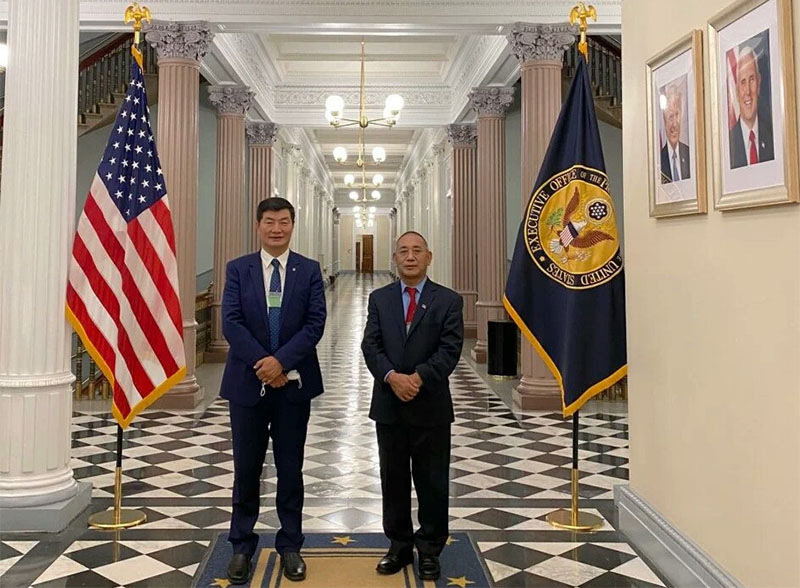 Washington DC —On November 20, 2020, Tibetan President Dr Lobsang Sangay entered the White House of the United States—a historic feat. This is the first time the head of the Central Tibetan Administration has been invited to the White House in the last 6 decades.

During his meeting with US officials working on issues relating to Asia, Dr Sangay addressed the critical and repressive situations inside Tibet under China, according to the Office of Tibet, Washington DC. This historic move comes a month after the US State Department formally welcomed the President of the CTA to the State Department Building for official meetings.

Tenzin Chemey of Tibet TV spoken to President Dr Lobsang Sangay about his White House meetings and the historical and political significance of the official visit. "I met officials at the White House on Asia-related issues, so staff members from both the President and the Vice-President’s Office were present. It was a great honour for me because after six decades now, the President of the CTA is formally invited to enter the White House. For the last nine years, I have been going to Washington DC; they always say that as the representative of the Tibetan government in exile, them allowing me to enter either the State Department or White House amounts to recognising the Tibetan government in exile," Sikyong responded.

"Last month, we made a breakthrough with the State Department with the consent of the Secretary of State Mike Pompeo and yesterday to the White House, with the consent of the highest official of the White House. So it is a big deal because we have been in exile for the last six decades and wherever we go, we look for recognition and acceptance that CTA does reflect and represent the aspirations and wishes of Tibetans inside Tibet and CTA is a democratically elected body and reflects the democratic values. To have that recognition is a big deal," he said, added: "We have been making a bit of noise and efforts; finally, it happened. I feel this is a message of hope and solidarity for the six million Tibetans inside Tibet all the way from the White House".

"I think there are a couple of factors. One, globally, there is a general understanding, if not consensus, that the Chinese government is too aggressive, manipulating the international system, violating democratic norms and human rights. So the Communist Party of China is not adhering to the international norms and the practices that we had for so many decades. Even in Washington DC, they are moving from a mindset of cooperation to competition, and I would urge them to have a confrontation on human rights of Tibetan people and others in China and Hong Kong, including East Turkestan," the President said, speaking the implications and significance of the meetings.

"In that context, under the leadership of His Holiness the Dalai Lama, Tibetans have been practicing democracy which ought to be acknowledged; also at a personal level as I have been to Washington DC more than a dozen times and met so many officials with whom I have personal relationships. Since they know me very well, they agreed to go out of their ways to have me invited to the State Department and the White House," Sikyong added.

Responding to a question why were any other officials of the CTA not allowed in the White House in official capacity earlier, Dr Sangay said "It takes a bit of a discussion even within a department, inter-agencies, and a lot of debates and discussions, consent and agreement from different agencies to come to this conclusion. It took us some time, but finally, CTA is here in Washington DC and the White House."

"There has been discussion at Washington DC that His Holiness should be invited to address the US Congress. More than a year ago, Representative Ngodup Tsering and I met Congressman Ted Yoho. He was very supportive, and he also spoke strongly against the CCP. During our second meeting, he proposed to invite His Holiness to the US Congress and asked whether His Holiness would come or not. I told that we would seek His Holiness’ blessings. Later upon my return to Dharamshala, His Holiness kindly consented to address the Congress. Congressman Yoho then said he would move a resolution to that effect, and here we are," he said, touching upon the  US House resolution that calls for inviting His Holiness the Dalai Lama to a bipartisan, bicameral forum.

"A few days ago, there was unanimous consent on the resolution; both the Democrats and Republicans came together on the Tibet issue; which is a big deal. Even though the two parties do not get along, the Tibet issue has always and continues to enjoy bipartisan support. For Tibetans, it is crucial to remember that we must keep the Tibet issue a bipartisan issue. So, all the members of the Congress voted to invite His Holiness the Dalai Lama, recognising his leadership and contribution to world peace.

"In addition to that, for the first time, the US Congress passed a resolution endorsing Middle Way Approach as a policy and genuine autonomy as the solution. Previously, the resolutions stated that there should be dialogue, but then the dialogue is not the end, it is the means," Sikyong added, speaking of the US House resolution affirming the significance of the advocacy for genuine autonomy for Tibetans in the People’s Republic of China.

"In the last 7-8 years, CTA has changed the strategy to say that the governments should endorse the policy and the result is, what we seek is genuine autonomy, so that has been our approach and efforts. There is a bill at the Parliament of Canada and 90-plus members of the Japanese Parliament have also passed the internal resolution endorsing Middle Way Approach. MPs in around 14 countries have raised issues or debated on the Middle Way Approach," he further added.

"We are thrilled that the US Congress led the way and passed the resolution, recognising the great leadership of his Holiness the Dalai Lama and Middle Way as a policy," Dr Sangay said while praising the work His Holiness the 14th Dalai Lama has done to promote global peace, harmony, and understanding.

Talking about recognition, the recent report of the US State Department Office of Policy Planning described Tibet as militarily occupied land and significant of the recognition of the state Tibet is currently under, Tibetan President responded by saying "It is a big deal to say that Tibet is under military occupation. Seven to eight years ago, our friend Michael Van Walt and I had this discussion when he asked me whether I noticed how the Tibetan narrative had shifted to our detriment."

He continued: "Therefore, we changed our strategy and changed the narrative, hence the Department of Information and International Relations under the CTA has published the report titled ‘Tibet was never a part of China but Middle Way remains a viable solution’. The first chapter of the report clearly establishes that Tibet was an independent country and it is under illegal occupation of China now and all kinds of human rights violations are going on, but Middle Way is a viable solution."

"Hence, the report of the State Department amounts to endorsing our strategy that Tibet is under military occupation, which means Tibet was independent and is under military occupation. Next, based on the Middle Way approach and as per His Holiness’ wishes, we want to have a win-win solution – win for China and win for Tibetans, i.e., to grant us genuine autonomy. In that context, we are reasonable and very moderate because Tibet was historically independent, and we are entitled to have independence, and there are all kinds of violations taking place under Chinese occupation. However, still, we are very reasonable to seek genuine autonomy for the Tibetan people. So, we are trying to change that narrative, and the report of the State Department helps us support that narrative. This is the narrative we want to take to different parts of the world," Sikyong said.

"Ultimately we don’t want to compromise on three things: firstly, Tibet was independent, and we are entitled to have independence; secondly, Tibet is currently under military occupation; and third, all kinds of human rights violations are taking place including political repression, cultural assimilation, economic marginalization, and environmental destruction but for the sake of six million Tibetans in Tibet, we are willing to compromise if genuine autonomy is granted to Tibetans," he added.

Finally, the Tibetan President told Tenzin Chemey of Tibet TV by saying: "That’s the narrative we want to establish, and this will strengthen the argument for the Middle Way Approach and genuine autonomy for the Tibetan people."