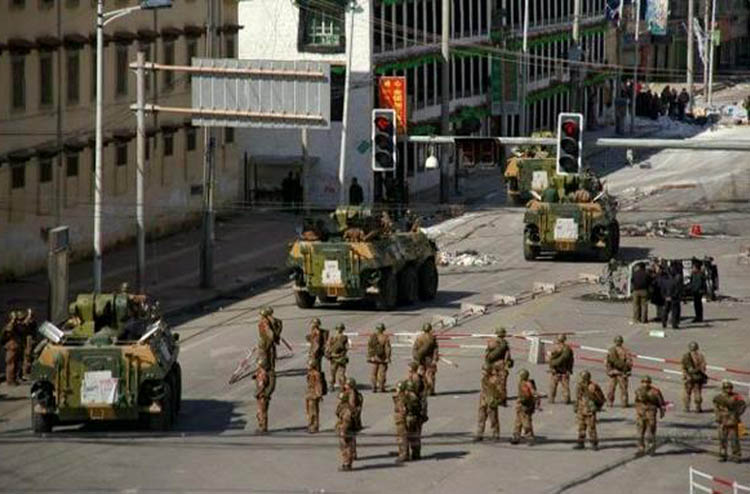 Dharamshala: Founded in 1996, the Center for Tibetan Human Rights and Democracy (TCHRD) is the only human rights organization in exile involving litigation, legal advocacy, education, and public outreach. Each year it publishes an annual report covering violations, positive trends, if any, and "significant human rights-related processes" affecting Han Chinese and Tibetans.

Human rights are a set of basic rights, which most the people believe belong to all human beings by birthright. The concept is ancient, although the term "human rights" only entered usage in the 1940s. Because many people, especially in democratic countries, feel very strongly about human rights, a number of measures have been undertaken to protect their citizens.

TCRHD's latest annual report is examined below, "during 2010, there is no let up by the government of PRC. As of 30 December 2010, there are 831 known political prisoners in Tibet out of which 360 are known to have been legally convicted by courts and 12 Tibetans are serving life imprisonment term."

For example, freedom of expression is targeted, and Tibetans particularly intellectuals have been threatened, denied equality, education, employment, and their citizenship without "declaring loyalty" to mainland China. In other words, on condition they abandon their national identity, culture, language, and historic heritage that's the equivalent of asking Han Chinese to renounce Buddhist leaders including His Holiness the Dalai Lama. Harsh crackdown on intellectuals and cultural figures have continued. Since 2008, over 60 Tibetan writers, bloggers, intellectuals and cultural figures have been arrested.

Financial means involves claiming social rights, including health-care and education, as commodities, accessible to those Han Chinese who moved in Tibet. Most parts of Tibet remain under siege, and sustains near daily assaults, killings, genocide and targeted assassinations. China not only using its financial power with western, Asian and African governments, China pays Nepal government to arrest Tibetan refugees as they cross over the Tibet-Nepal borders to escape persecution, according to U.S. embassy cables. Why is the economy and Human Rights treated differently, by the West, in the ‘special case' of Tibet? The United Nations made an attempt to put Human Rights into a broader context, through decades of first-hand experience with Tibetan refugees worldwide. The Europeans and Africans Unions treat the Tibetan similarly, even as they play their economy games with China.

In many urban areas including Lhasa, the capital of Tibet, military forces and government officials enforce land seizures, home demolitions, displacement, segregation, isolation, closures, movement and travel restrictions, the so-called 'Western Development Strategy', daily home invasions, arrests, attacks on peaceful protesters, imprisonments, and torture of detainees under a rigid 'matrix of control' involving checkpoints, bypass roads, roadblocks, curfews, electric fences, and various other harassment to cow all Tibetans into submission or make them give up their original identity.

Since 1950s, China has denied Tibetans fundamental human and civil rights and increasingly fewer of them to many officials. In the territories of eastern Tibet, it's far worse under military occupation and China laws affording no protections to Tibetans. Nor has the Supreme Court upheld the law that should be sacrosanct in a legitimate democracy. When it's compromised, no one is immune from abuse and neglect as greater numbers in Tibetan are learning, including Chinese.

Losing it threatens all other freedoms. It's a basic legal right even China's Supreme Court recognizes, but not absolutely having repeatedly ruled that curtailing it is justified in extreme public danger situations or if national security may be undermined. However, the "true test of freedom of expression lies in allowing the airing of views that are extreme, controversial, or infuriating." However, during the 2008 Tibet protests, China failed the test. Protest demonstrations were attacked, dispersed, and silenced. Participants were arrested and then intimidated by dubious charges. Excessive force and preemptive detentions were used, then bogus indictments made based on charges of 'participating or involving in unlawful gatherings.'

Legally, authorities overstepped so egregiously that harsher measures may follow, including targeted killings and torture. China also restricted the foreign media, prohibiting on the scene access to report accurately on the conflict. For their part, the Chinese state controlled media largely supported the government. Overall, coverage restrictions during 2008 caused China's journalistic freedom rating to drop sharply as measured by international human rights organizations. Dissent was minimally tolerated, and repressing it continued unrest in Tibet. "Not only were critics silenced, they were accused and vilified, and their critiques unaddressed."

Many Han Chinese do not care about human rights of people in Tibet, they instead consider Tibet Han colonization. The Chinese authorities continue to violate a range of basic human rights. The use of the death penalty remains extensive and non-transparent; torture is widespread; there is a lack of judicial independence; obstacles to fair trials include administrative detention and re-education through labor; prison conditions are poor and prisoners are treated badly; human rights defenders, Buddhist monks and nuns particularly spiritual leader adherents face harassment and detention; human rights violations occur frequently in Tibet; and there are increased restrictions on freedom of expression and severe restrictions on freedom of association since 2008.