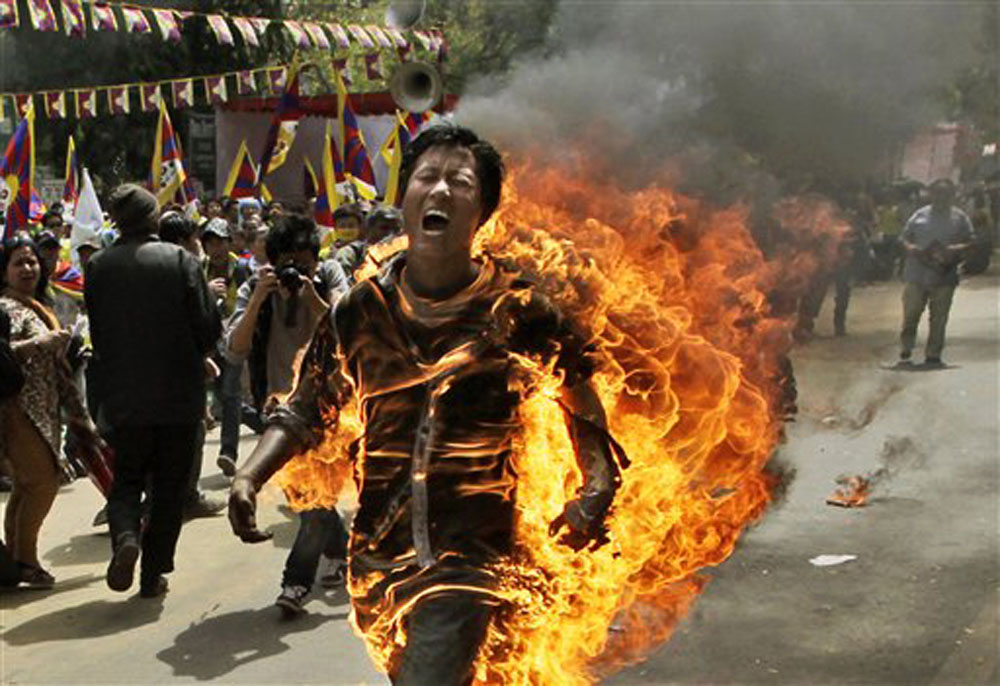 Dharamshala: - On March 26, the Central Tibetan Administration released a statement entitled "At Least Seven Reasons Why Beijing is Responsible for the Self-Immolations in Tibet." The statement rejects Beijing's claims that His Holiness the Dalai Lama is encouraging acts of self-immolation in Tibet.

CTA states that, on the contrary, His Holiness discourages drastic actions, and that the Kashag has called repeatedly for Tibetans to refrain from extreme measures in official statements on January 26 and March 10. The self-immolations, according to the CTA, keep occurring against the wishes of His Holiness and the Kashag because of the Chinese government's occupation and harsh actions against the Tibetans.

Since 2009, 30 self-immolations have occurred in Tibet. The Tibetans who have committed such acts were protesting Beijing's repressive policies and calling for the return of His Holiness the Dalai Lama to Tibet. In response, the Chinese government has stregnthened their repressive measures and deployed more military forces. CTA claims, "responsibility for the present tense situation lies entirely with Beijing and so does the solution."

His Holiness the Dalai Lama has advocated only for peace, says CTA: "He has repeatedly stated that the Tibetan struggle is not against the Chinese people or China as a nation. Furthermore, he has openly expressed his admiration for Chinese civilization and praised Chinese work ethics."

Kalon Tripa Lobsang Sangay stated, "His Holiness the Dalai Lama is an internationally-recognized statesman for non-violence and peace who is also the most revered leader of the Tibetan people. He is part of the solution to the current impasse in Tibet and not the problem. The sooner Beijing finds the wisdom to recognize this, the quicker it can address the tragedy in Tibet thus serving the mutual interests of both Chinese and Tibetan people."

In 2008, CTA states, His Holiness the Dalai Lama issued a Memorandum on Genuine Autonomy for Tibet, and added a Note on the Memorandum in 2010. His Holiness presented these to the Chinese government in hopes to find a resolution to the Tibetan question through dialogue. In the Memorandum, His Holiness advocates for Tibetan areas to remain a part of China. His Holiness calls for greater autonomy and rights for the Tibetan people within the context of Chinese rule. The approach is called the Middle Way Policy, but, CTA claims, "the Sino-Tibetan dialogue process has come to a halt due to a lack of response from Beijing."

The seven reasons given by CTA for Beijing's responsibility for the self-immolations are as follows: continuing occupation of Tibet, political repression, patriotic re-education and demonization of His Holiness the Dalai Lama, the shooting and killing of peaceful Tibetan protesters, the economic marginalization and making of Tibetans as second-class citizens in their homeland, the cultural assimilation and denial of Tibetan as a medium of instruction, and environmental destruction.