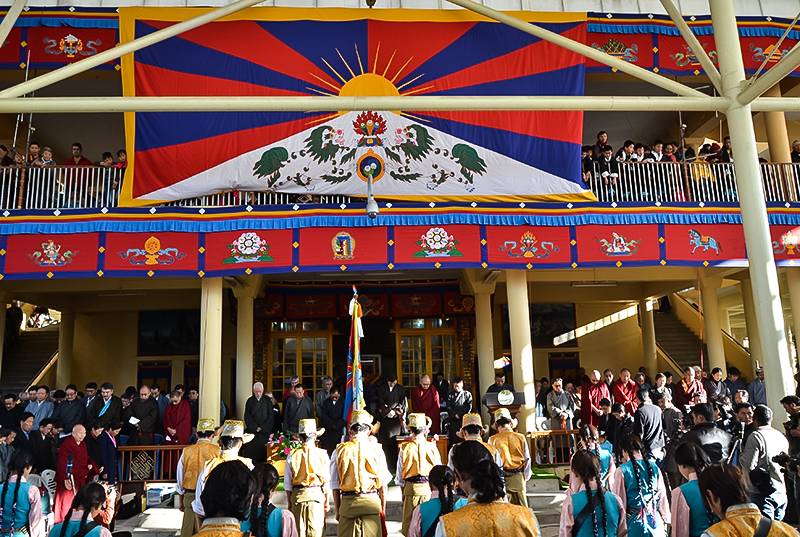 Tibet Remembered as the World marks another Human Rights Day

Dharamshala: - As we celebrate World Human Rights Day 2013, we remember all those men and women who have sacrificed their lives for the cause of peace, democracy and human rights and the legacy of that struggle that we must continue to carry forward.

On this day, 64 years ago, the Universal Declaration of Human Rights was signed. One thing that weighs down heavily on the mind of Tibetans in exile, and their global supporters, is that Tibet continues to be occupied by the world's worst human rights abusers, the Chinese government.

The Chinese regime which has no history of valuing human rights continues to maintain hard-line policies on Tibet such as arbitrary arrests, unfair trials, torture and other inhuman-treatment in Tibet. The Tibetan people, over six decades, have never stopped denouncing the serious human rights violations in Tibet as well as the Chinese political repression, cultural assimilation, social discrimination, economic marginalization, environmental destruction and lack of religious freedom. All these have accumulated as causes for the 123 Tibetans who have self-immolated, sacrificing themselves to protest China's policies in their homeland Tibet.

Under the regime of the current President Xi Jinping, the resurgence of violence against Tibetan people has continued, including those who are defending their holy mountains and rivers against exploitation by Chinese mining and dam companies and especially the families/relatives of the self-immolation victims.

The world must not forget even for moment that there are1.2 million Tibetans, including 173,221 tortured in Chinese prison, 156,758 executed, 432,705 killed in fighting, 342,970 starved to death, 9,002 suicide and 92,731 other forms of struggling to death because they all lost their lives standing up for Tibet and Tibetan people. Because they all lost their lives between 1949 and 1979 standing up for the six million Tibetans who have the right to live in peace and freedom like every other human being.

It is not very agreeable, but simply true what the UN High Commissioner for Human Rights has said in her statement on Human Rights Day this year:" In several instances where deplorable, large-scale violations of international human rights law were occurring, the international community was too slow, too divided, too short-sighted – or just plain inadequate in its response to the warnings of human rights defenders and the cries of victims," Navi Pillay said, adding: "the Vienna Declaration should be viewed as a blueprint for a magnificent construction that is still only half built." But in today's world, it is difficult to understand the decades long non-violence struggle as well as to comprehend how people in world major freedom struggles in the mid-20th century resorted to sacrificing life for freedom and justice.

Since the death of the revered South African icon Nelson Mandela, there have been many reflections on his life and the things for which he stood. At the heart of much of what he wanted was respect for human rights. This recognition of human rights must be an ideal to which we should all admire if we want a better, fairer and more just society. Nelson Mandela once said that: "For to be free is not merely to cast off one's chains, but to live in a way that respects and enhances the freedom of others."

Once again, we, the Tibetans in exile and our supporters around the world strongly express our deepest condolences to the people of Tibet, who have suffered oppression, exploitation, subjugation and discrimination since the Chinese military occupation. However, the Chinese government policies have failed to address the aspirations of the Tibetan people with their distinct cultural identity. Our freedom and our rights depend on each other to survive.

In November, 2013, Spain's national court issued arrest warrants for former Chinese President Jiang Zemin and four other top Chinese authorities for genocide and other crimes against humanity in occupied Tibet in an historic case. With this incredible achievement, it may appear as though the voice for human rights in China and Tibet is drastically improving.

However, human rights violations, violence and oppression at the hands of the Chinese government remain the only reality for the people of Tibet at this time. We need to take further steps to develop an approach, (similar to the methods used for the cases at the Spain's national court) explaining the current situation in Tibet and asking for the application of international pressure against the deplorable human rights violations that are repeatedly committed against Tibetan populations by the Chinese government.

We also commemorate the sacrifice and reaffirm our commitment to justice for the people who sacrificed their lives for our freedom in 2008. We must never forget 15,000 Tibetan brothers and sisters, who were killed within three days in a Chinese military deadly crackdown on the National Uprising of 10 March 1959 in Capital Lhasa. There's no any doubt that resorting to the self-immolation protest against Chinese rule is not the best option for our freedom struggle. Tibetans today, however, do not have the better of choice between good' and bad. The plight and suffering of six Tibetans means that they can only choose between bad and worse.

It seems, the world has forgotten the well-known Hungarian poet Sandor Petofi's (1823-1849) poem, 'Life is dear, love is dearer. Both can be given up for freedom.' And they have also long forgotten the line: 'Give me liberty, or give me death.' They do not even understand what Communist Xia Minghan once said: 'It does not matter if you are beheaded, as long as you are fighting for truth. Many however say "the world is unfair, unjust and morally twisted. — no matter how many innocents they target for murder — and its neglect of the cruelly treated, peaceful Tibetans."

The ongoing human rights violations in Tibet is condemned worldwide as unfair. Therefore, China must learn from the remarks made by US president Jimmy Carter at a White House Meeting Commemorating the 30th Anniversary of the Declaration's Signing on December 6, 1978, in which he said in 1943, "For millions of people around the world today the Universal Declaration of Human Rights is still only a declaration of hope. Like all of you, I want that hope to be fulfilled.

The struggle to fulfill it will last longer than the lifetimes of any of us. Indeed, it will last as long as the lifetime of humanity itself. But we must persevere. Lastly Tibetans strongly believe in speaking up for those who cannot speak for themselves. Our strength comes from their spirits, including the brave Tibetans and the political prisoners jailed inside Tibet. Because that's what the universal decoration hopes for. Therefore, we also believe victory will not only prevail for the Tibetan people, but for the seven billion human beings worldwide.