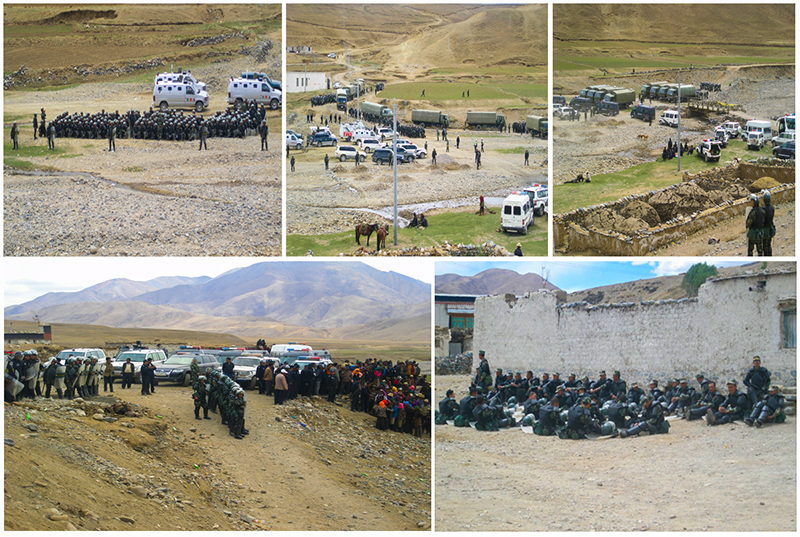 Dharamshala: - Modernising Tibet just a mouthpieces for China? Dharamshala: The one-sided policies by China have robbed the Tibetans of their basis for cultural identity; causing the loss of their language in their homeland and commerce in dealings with communist authority, their culture, and now they're facing a natural resource genocide.

Tibetans have completely lost the right to independently practice their beloved Buddhism and adherence to their traditional way of life, they've lost their once sacred, pristine environment, and their confidence as a people, for they're truly treated as third class citizens in their own country under Han Chinese occupation and oppression .

"There is evidence the Chinese people in Tibet are increasing month by month," the Tibetan spiritual leader His Holiness the Dalai Lama has told international communities on various occasions, calling the population shift a "form of cultural genocide"; this mass migration will render his people an insignificant minority in their own homeland. A minority can be overlooked and ignored. The Han Chinese or authorities of the communist regime hold all the power; economic, military, financial and political.

The Han Chinese "reasoning" goes, that once Tibetans no longer exist as a distinct people, and their land is settled with a majority of Han Chinese, China will have "legitimized" their illegal occupation and annexation of Tibet that has a separate National Integration in the history of world. Mining in Tibet: The Open Wound of my Country So far, over 3,000 mine beds, deposits or mineralised sites with as many as 102 types of minerals were discovered in the so called Tibet Autonomous Region (TAR), Chinese official media has reported, quoting officials from the regional bureau of land and resources.

What sweetness of words for the Han Chinese? When an occupying power exploits the resources of the occupied land at the expense of the original inhabitants, it builds itself on the ruins of what it has destroyed, and such theft of resources is obvious, even when the occupier tries to hide its actions behind noble principles. This malfeasance is made worse by claiming that the benefits in question are a financial gain for the communist regime. When such wrongdoing is compounded even further by acts of genocide against the Tibetan people, killing thousands and dispossessing hundreds of thousands in acts of ethnic cleansing, the situation is very serious indeed.

According to various news reports, the mineral resources in the Himalayan region have an estimated potential value up to 600 billion yuan (USD 100 billion). Among the variety of mineral reserves, Tibet is reported to have large chromium and cuprum (copper) far higher than other regions of mainland China.

Twelve other mineral reserves rank among the top five across the whole country. Reading this has truly incensed me, because it lays bare the motivations of the Chinese government for the world to see. Knowing about the genocide of the Tibetan people and their culture identity, how can the world do so much business with this country knowing what their government is doing? It boggles the mind. The Communist leaders are corrupt, they deplore freedom of speech, and they do not care for the people, the environment, nor the spiritual ties this land has to those who live there. Imagine the damage to the environment their 21 highway project will cause.

Imagine the damage to the land with all the aqueducts and other means of stealing Tibet's natural resources, particularly mineral water, and excuses they will come up with to not have to be responsible for what they are doing in their own country. It is no wonder no date has been set for their latest scheme. It should bring international condemnation to them for their blatant attempt to ravage Tibet and other holy places of their resources particularly their water, and take the identity of their people away just for their own profit. Legal or illegal?

China has invited many companies and transnational oil giants including BP and Shell to explore for oil and gas equivalents after realising that its own companies lacked the expertise known to drill in a region known for its complex geology. Regarding my past 25 years of watching this experiment on our homeland, we feel that Tibetans are unable to exercise their economic rights to determine how their resources are utilised. They live in an atmosphere of fear and intimidation where opposition to an unsuitable project such as hydrocarbon extraction would have dire consequences. Perhaps one of the most controversial Chinese plans to tap Tibetan resources to date is China's new water scheme, labelled the "big Western line".