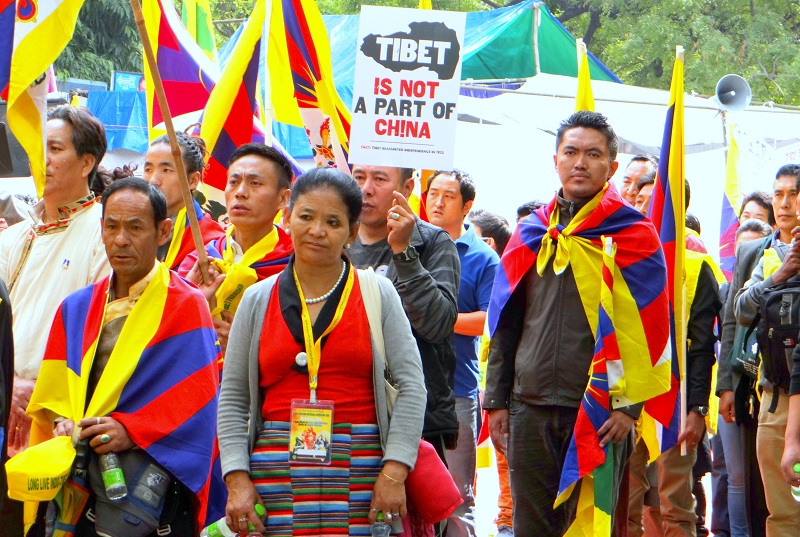 Dharamshala: The 20th century has been marked by unprecedented levels of violence and bloodshed committed in the course of religious and cultural persecution, ethnic conflict, totalitarianism, war, and genocide.

Among the worst acts of violence include the Soviet pogroms against Ukrainian Kulaks, Nazi Germany's systematic destruction of Jews and Gypsies, and the Khmer Rouge's eradication of alleged opponents of socialism in Cambodia. More recently, by virtue of media images, we have witnessed ethnic cleansing in the Balkans and the slaughter of hundreds of thousands of Tutsis and moderate Hutus in Rwanda. The legacy of genocide remains in these countries, although the systematic slaughter of civilians has since ended. However, the same cannot be said regarding the genocide of the Tibetan people under Chinese occupation.

To, this very day the Chinese government continues to detain, torture, and kill Tibetans in order to control the strategic land of Tibet. The reasons for the same are simple-

1) The occupation of Tibet provides China a border with India, Nepal, Bhutan, and Afghanistan, as well as the natural barrier to any threats that the imposing Himalayas provide

2) Control of Tibet increases Chinese control over control of the bountiful land, water, and mineral resources of Tibet.

The official Chinese reason for this illegal occupation is that china only wants to 'liberate' Tibetans from poverty by opening their society to industrialization, but the real reason for this crime is only to increase the Tibetan dependence on the Chinese for employment, food, and social services. But the most serious issue is that of the cultural genocide, that is intended to destroy the traditional Tibetan customs and religions. As a consequence, the central system of belief and values that has always united Tibet is slowly but surely being lost.

It is widely believed that approximately 1.2 million Tibetans, or one fifth of the population, died from starvation, execution, imprisonment, or torture during the Chinese invasion of Tibet. A failed Tibetan uprising in 1959 forced the Dalai Lama, Tibet's spiritual leader, to escape to India. Approximately 85,000 Tibetans followed their leader and soon began constructing Tibetan refugee settlements in India and Nepal. Today, there are about 100,000 Tibetan refugees living in Dharamsala, India, the home of the exiled Tibetan government. Continued human rights violations, religious and cultural persecution, and limited economic opportunities forced almost 25,000 Tibetan refugees to leave their home in the 1980s, while several thousand per year still arrive in India and Nepal.

Another tragedy confronting the Tibetan people is the question the internally displaced persons (IDPs) who remain in Tibet under the totalitarian regime of China. The most well known Tibetan IDP is Gendun Choekyi Nyima, who was named by the Dalai Lama as the reincarnated Panchen Lama. When the Chinese learned of the Dalai Lama's decision, they detained the 5 year-old boy, who has not been seen in public since 1995 and has been held incommunicado, removed from the Tibetan people and leadership. In response to the detention of Nyima, many human rights groups refer to the current Panchen Lama as the world's youngest political prisoner. Beyond detaining Nyima, the Chinese government appointed their own Panchen Lama, whom they intend to groom as a 'puppet' for China. This action blatantly undermines Tibetan cultural integrity by invalidating the traditional selection process for locating a Panchen Lama.This is but one example of the blatant form of cultural genocide that is being practised by the Chinese government in Tibet

In spite of the grim reality of the situation in Tibet, very little is being done by the Chinese government or Western governments to alleviate the suffering of Tibetans. Economics have overshadowed any attempt to improve human rights in Tibet. China's explosive economic growth and vast population have captivated Western capitalists, who are willing to ignore human rights violations, such as repressive labor practices, when these violations contribute to an increase in business opportunities and profits. The primacy of profits over human rights is evident in China's recent admittance to the World Trade Organization, as well as in Beijing's being awarded the Olympic bid for the 2008 summer games.

In the world of today where money talks, it is highly unlikely that the Obama Administration will let the 'Tibet Question' interfere with economic relations with China. Therefore it is necessary for journalist, activists, and grass-roots organizations to promote 'economic diplomacy' as a way to ameliorate the situation in Tibet. The media has an important role to play in spurring this shift to economic diplomacy by putting Chinese abuses in the spotlight.

In the name of basic human morality and dignity, the world community must try and make more concrete efforts to end the human rights abuses being committed against Tibetan people. This would go some way in restoring the glory that these proud people once knew.

Spain's national court recently issued arrest warrants for former Chinese President Jiang Zemin and four other top Chinese authorities for genocide and other crimes against humanity in occupied Tibet in an historic case. With this incredible achievement, it may appear as though the voice for human rights in China and Tibet is drastically improving.

However, human rights violations, violence and oppression at the hands of the Chinese government remain the only reality for the people of Tibet at this time. We need to take further steps to develop an approach, explaining the current situation in Tibet and asking for the application of international pressure against the deplorable human rights violations that are repeatedly committed against Tibetan populations by the Chinese regime.