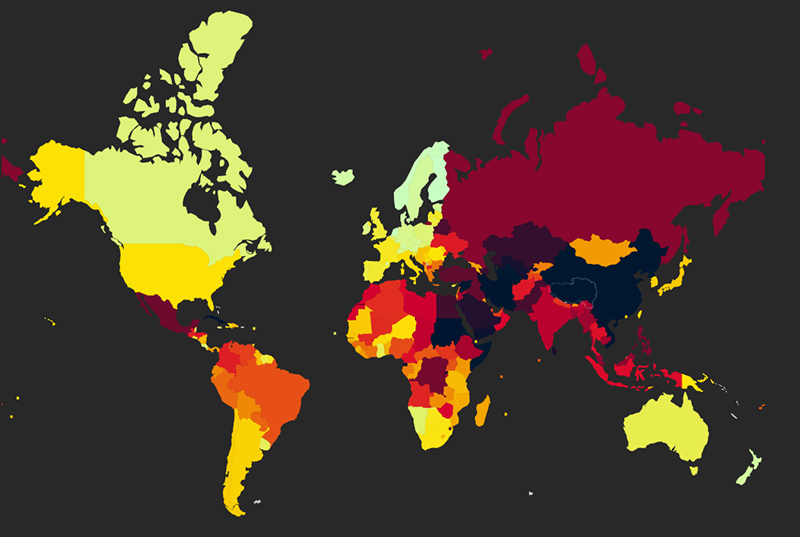 Dharamshala: - Despite strong international criticism for the lack of press freedom and freedom of speech, including Internet access, in Chinese-occupied Tibet, Chinese officials have claimed that the number of people with access to the internet in the Himalayan region was "2.03 million at the end of 2013," according to a recent report by state controlled media 'Xinhua'.

Qunggyi, so called head of the Tibet Communications Administration claimed that "67.5 percent of Tibet's 3 million population have access to the Internet."

His Holiness Dalai Lama repeated his calls on China to end the censorship, calling it immoral, "1.3 billion Chinese people have every right to know the reality. Once 1.3 billion people know reality, they also have the ability to judge what is right, what is wrong," he said, adding that censorship in a globalized world cannot exist "only within China."

However, despite these difficult circumstances, the Chinese government still increases its grip, isolating Tibet even more from the outside world. The head of the Communist Party in Tibet, Chen Quanguo, has several time ordered local authorities to step up surveillance of all means of communication, particularly mobile phones and the Internet, in order to "maintain the public's interests and national security".

In November 2013, he has vowed to "strike hard against the reactionary propaganda of the splittists from entering Tibet." He has said the censorship campaign will be intensified with the Chinese government confiscating illegal satellite dishes, increasing monitoring of online content and making sure all telephone and internet users are registered using their real names.

Chen has openly said that by thus ensuring that only it is seen and heard, the party would seek to expose the spiritual leader of Tibet His Holiness the Dalai Lama's "hypocrisy and deception" and his "reactionary plots".

Tibet is a lesson for Taiwan and it's people. The people of Taiwan must wake-up it's so called "one country, two systems." The recent mass protests by Taiwanese students sent a clear message to Ma Ying-jeou's government not to sell out their precious island. Tibet's past and future have direct and pressing relevance to Taiwan because many Taiwanese people believe that Tibet's current fate may well be their future too.

The Paris based world media-watchdog, Reporters Without Borders has continued its condemnation at the blackout imposed by Chinese authorities in Tibet, preventing all media coverage of protest movements there. "Not only are foreign media organizations prevented from covering these events, but the authorities have also organized a veritable disinformation campaign, using pro-government media such as the Global Times, which play down the disturbances and accuse the international community of interfering."

There have been arrests of those involved in writing a book on Tibet or post a content relating Tibet or speaking out in their defense. In addition, most of the Tibetan independent website blogs have been closed down and intellectuals cannot report freely on the situation in Tibet.

There has been a particular targeting of religious and political opponents. Human rights defenders and the friends and relatives of the self-immolators have felt the heaviest of blows. The Central Tibetan Administration has many times urged international agencies and national governments to investigate on the events, particularly the biggest waves of political self-immolations in recent history, but also the brutal crackdowns that continue in-spite of strong international condemnation.

The strategy adopted by the Chinese government for more than last 50 years, namely cutting off certain places in Tibet from the media and online worlds in order to subdue them silently, is not new and has been applied elsewhere.

Most of those arrested have been held incommunicado or in solitary confinement. They have had restricted access to lawyers and many have reported severe torture and other ill-treatment. One former political, Goshul Losang, who was arrested on 29 June 2010 by Machu County Public Security Bureau (PSB) officers. For about 5 months he was subjected to severe torture including pain-inducing injections, and deprived of sleep and food by the interrogation officers in Machu County.

The India based Tibetan Centre for Human Rights and Democracy said that "Goshul Lobsang, who recently died of torture injuries, might have received injections designed to cause and exacerbate his pain while he was being tortured in detention. The use of torture methods to increase pain is consistent with other Chinese torture tactics. For example, the Chinese adopted Soviet torture techniques to inflict pain faster.

When Chinese President Xi Jinping begins a recent three-day official visit to France, the Reporters Without Borders labeled him of a pure "enemy of freedom of information," and condemned "China's growing harassment of journalists and its mistreatment of cyber-dissidents and activists who try to expose the constant human rights violations and persecution of human rights defenders."

China is ranked 175th out of 180 countries in the press freedom index that Reporters Without Borders published in February this year and is more deserving than ever of inclusion in the world media watch-dog list of Enemies of the Internet, the latest version of which was issued earlier March this year.

According to the world media watch-dog, at least 74 netizens, including Nobel peace laureate Liu Xiaobo, and 30 journalists are currently detained in China, over 50 intellectuals, including writers in Tibet, making it the world's biggest prison for news providers.

China needs the world as much as the world needs China. The world must understand the need to strengthen economic ties but also that the principles and values that sustain human rights, respect and dignity should be treated with equal or greater importance, without losing their moral compass and the universal values.

We, the Tibetans in exile, are lucky that our basic human rights are generally respected. We have freedom of expression, freedom of assembly and the right to peaceful protest against the Chinese regime. There is no fear of arbitrary detention or torture. As we enjoy these fundamental freedoms, which we can often take for granted. At the same time it is important to remember those, our kin, whose basic human rights are not respected. As a Tibetan, we must remind ourselves to remember those who sacrificed their lives for the just cause of Tibet.