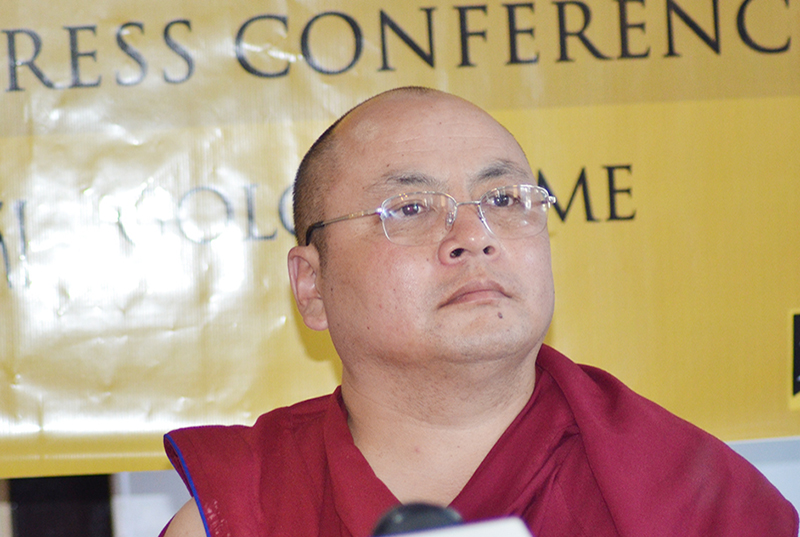 Dharamshala: - The torture of Tibetan citizens has been a cause for widespread concern ever since the Chinese forcefully took over Tibet in the year 1959. Since then, the cases of torture and arbitrary detentions and arrests have been pretty common. Recently, Golok Jigme, the Tibetan monk who escaped from Chinese authorities after being arrested for helping in the making of the film "Leaving Fear behind", has also emphasized the widespread torture that is seen in the regions of Tibet, while talking about his own experiences.

The Chinese government has been torturing Tibetans in numerous ways for any dissent which has been shown towards the communist government, and for voicing their views for the cultural preservation of Tibetan identity, language and religion, as well as for claiming their allegiance to the spiritual leader of Tibet, His Holiness the Dalai Lama.

Torture is considered a crime against humanity. Article 1 of The United Nations Convention Against Torture defines torture as "Any act by which severe pain or suffering, whether physical or mental, is intentionally inflicted on a person for such purposes as obtaining from him or a third person, information or a confession, punishing him for an act he or a third person has committed or is suspected of having committed, or intimidating or coercing him or a third person, or for any reason based on discrimination of any kind, when such pain or suffering is inflicted by or at the instigation of or with the consent or acquiescence of a public official or other person acting in an official capacity. It does not include pain or suffering arising only from, inherent in or incidental to lawful sanctions."

Despite international standards of human rights being set by the United Nations and other organizations, the rights of Tibetans have been continuously infringed upon. Even though the UN has been condemning the torture carried out by Chinese authorities, and the lack of free speech and expression in Tibet, no substantial steps have been taken by the UN. China, in fact, continues to be a member of the United Nations Human Rights Council. Apart from the UN, a lot of individual governments have expressed their sympathy for the plight of Tibetans exposed to torture at the hands of the Chinese, but no concrete actions have been taken by the governments either.

In his film Jigme, while recounting the events at the Chinese prison where he was taken after his arrest, talks about how he was brutally tortured, which has resulted in him having serious injuries including broken ribs, a dislocated shoulder, and damaged knees. "When I was first arrested, my hands and feet were shackled and I was tied hanging for 10 hours. Later, I experienced similar torture seven times, which often lasted between 2 to 5 hours. Even today I continue to have severe pain on the backbone and ribs and my knee dislocates whenever my body gets cold," he said.

This again raises the question as to China's qualification to be a member nation of the United Nations Human Rights Council. After committing so many atrocities against Tibetan people, China fails on political and moral grounds. They have also failed to adhere to the clauses of the Universal Declaration of Human Rights (UDHR) and the International Covenant for Civil and Political Rights (ICCPR). To elect China as a member of the UN HRC is a failure on behalf of the international community as well.

The reason behind the election of China to the UN HRC is very apparent. China's economic progress has been remarkable. To appease the Chinese government, many western nations have succumbed to their demands and requests, and have maintained neutrality on issues of human rights violations by China.

Some world leaders too are in an effort to appease the Chinese and suppress the Tibetans. For example, numerous world leaders have been approached by Tibetan individuals, government bodies, and non-governmental organizations to advocate for their cause when they are meeting Chinese political leaders. However, after meetings with the Chinese authorities, these world leaders conclude by saying that Tibet is a part of China, and by rejecting all the claims of the oppressed Tibetans.

Despite most modern countries of the world having their own domestic legislation, apart from the international instruments, which emphasize upholding human rights and propagating free speech and media, they often go against the principles of their own laws and legislation, in order to side with the Chinese economic progress.

This one-sided view is morally and politically mistaken in the 21st century, and indeed it is a matter of great shame that these governments have decided to agree with China. It is clear that these moves are fueled by economic interests, and historically, such one sided views have only garnered a negative reputation and image for countries in the international community, and have had a negative influence on their own younger generations.  One hopes that these countries will reconsider their views and policies, and adhere to the Universal Declaration of Human Rights and the International Covenant on Civil and Political Rights in the coming years.