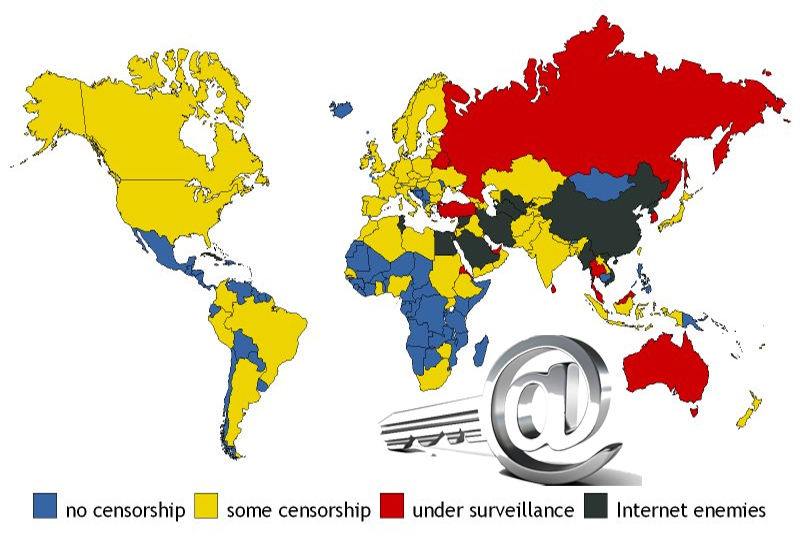 Dharamshala: - Freedom of expression and transparency are essential parts of a healthy democracy. In China and Tibet people cannot exercise their right to vote effectively or take part in public decision-making if they do not have free access to information and ideas and are not able to express their views freely.

Since the 1970s there has been a steady progress toward democracy and rule by the people. Authoritarian regimes and military dictatorships have fallen and communism collapsed throughout the Soviet bloc. In most cases, these systems have given way to electoral democracy and constitutional government. Major exceptions remain, but today electoral democracy is practiced in more than 130 out of 193 countries in the world.

Freedom of information, speech and the press is firmly rooted in the structures of modern democratic thought. With limited restrictions, every democracy has legal provisions protecting these rights.

The UN Declaration of Human Rights, adopted by the general assembly in 1948 declares "Everyone has the right to freedom of opinion and expression; this right includes freedom to hold opinions without interference and to seek, receive and impart information and ideas through any media and regardless of frontiers" (although as Article 19, it comes after the right to hold property, be married and hold a nationality, among others).

As such, morals and ethics heavily favor the nearly unfettered rights to speech, press and information. Such rights might be tailored to protect state security from a Lockesian social contract perspective, but a Kantian categorical outlook surely provides for a society in which everyone can speak freely is better to one in which no one can speak freely.

Freedom of speech is thus not only essential for individual dignity but also to participation, accountability and democracy. Violations of freedom of expression often go hand in hand with other violations, in particular the right to freedom of association and assembly. However one particular form of expression which is banned in some countries is considered as "hate speech" because some views might incite intolerance or hatred.

Communism, as a primarily economic system, is much quieter on the issue of individual human rights and dignity in recent decades. Two conflicting positions on these freedoms arise with a self-centered attitude. The first is an argument against individual freedoms. In a communist society, the individual's best interests are indistinguishable from the society's best interest. Thus, the idea of an individual freedom is betrayed with a communist ideology, while articulating as a sole benefit for the people.

The only reason to hold individual speech and information rights must be to praise the party, a condition which would likely be met only in certain instances rather than across time, making the default a lack of freedom, dignity and human rights.

On the other hand, the idea of perfect equality in official documents argues for a right of expression and press. Since each individual is equally important, each should have an equally valid point of view. Indeed, Marx defended the right to a freedom of the press, arguing in 1842 that restrictions, like censorship were instituted by the bourgeois elite. He claimed censorship is a tool of the powerful to oppress the powerless. That is what the world is seeing in Tibet and in recent events in Hong Kong.

Many implementations of communism favored a constitutional democracy, albeit usually with only one party. Before and at the creation of many communist countries, a desire for freedom from the oppression of the proletariat by the bourgeois translated into strongly voiced support for individual freedoms for speech, dissent and information.

By encouraging China to prepare for wars before he took power over China, Chairman Mao, proclaimed 'the people should subject ... the party in power, to severe criticism, and press and impel it to give up its one-party, one-class dictatorship and act according to the opinions of the people....The second matter concerns freedom of speech, assembly and association for the people. Without freedom, it will be impossible to carry out the democratic reconstruction of the political system.'

Thus, on the balance, it seems communist theory is compatible with freedoms of speech, information and protest, but it is far from a basic freedoms and rights such as it is under democracy and individual-centered systems like that of Kant and Locke. Freedom of information should only be granted when the party as a whole is likely to benefit.

In this light, it is unrealistic that communist leaders, while still a persecuted opposition philosophy, would strongly support speech rights and later reject them when communism becomes the ruling system. At that point, access to oppositional speech and information is no longer beneficial to the communist regime, and thus no longer needed in single party system.

Today China - more than almost any other country in the world - severely restricts its own citizens freedom of expression and human rights. Oddly enough, Article 35 of the current Chinese constitution, written in 1982, stipulates "Citizens of the PRC have freedom of speech, publication, assembly, association, procession and demonstration."

Up to the advent of the internet, the regime had been able to successfully curtail this freedom in nearly all its physical manifestations. Beijing has a tightly controlled traditional media, while forcing all published information to be from official sources and to be vetted through the state control.

Ironically, the regime founded on the free speech-backbone of Marx's words stipulates a minimum personal income of $35,000 dollars to be able to publish print media, an income level which could easily be considered bourgeois by Chinese standards. China also has strong restrictions against assembly and worship, demonstrated over the last few days with a crackdown on Tibetan protesters.

Many assumed the government's ability to crack down on dissent would be destroyed by the increased prominence of a dynamic and nearly infinite internet space. However, China has adapted it's censorship policies to the internet, and by many standards managed to stay ahead of the curve in restricting free speech in the digital realm.

Internet use in China is blossoming. As of recent survey, the so called China Internet Network Information Center, considered the premier source for measuring Chinese internet use, pegged the number of Chinese users at 210 million. This number will only grow in the foreseeable future, with the booming mobile market, more and more a popular portal to the internet, estimated to hit more than 600 million by 2014. This realm has been modified from it's original version. It has been formatted to fit The Party's view of the world.

China has responded with a vast centralized censorship program. One study by a group at Harvard in 2002, "found blocking of almost every kind of content. If it exists, China blocks at least some of it." The blocking has traditionally been centered on political and opinion based sites. Some of the most likely to be blocked are related to independence movements in Tibet, Taiwan and Hong Kong, protest groups like the Falun-Gong, political parties opposed to the regime, and sites on democracy and human rights.

For the majority of Chinese web-users, these controversial topic-specific sites are not part of their daily internet routine, which focuses merely on sports, entertainment and gaming sites. These users may have only the vaguest notion of the filtering being conducted by the state, including internet cafes being required to record and store information about all users and their internet use. Recently, however, the Great Firewall of China has evoked increased backlash as it has begun to block more popular social media sites such as Facebook, Twitter, Flickr and selected MySpace pages.

China's filtering and censorship program is regarded as the most sophisticated in the world. It includes some 30,000 censors as well as technology, often provided by foreign companies like Yahoo who are required to censor their results or be censored themselves. The filtering effort is in conjunction with a strict criminal prosecution system working with laws that forbid the publication of anything "(i) Denying the guiding status of Marxism, Mao Zedong Thought, or Deng Xiaoping Theory; (ii) Violating the Party line, guiding principles, or policies; (vii) Anything else that violates Party propaganda discipline or violates national publishing administration regulations." Making unrefuseable conditions, the regime also forces companies to display propaganda content. All ISPs are legally required to abide by these rules.

When we look at a wider perspective, North Korea has a reputation as one of the most secret nations in the world -- and for international journalists, it's one of the hardest places from which to report. But surprisingly there's a place that allows even fewer foreign reporters than North Korea does: China-controlled Tibet.

That's according to Tibet scholar Carole McGranahan, who is a professor of the University of Colorado at Boulder and who made the point during a recent lecture at Yale University, video of which is embedded below. McGranahan also discussed the rising trend of Tibetan self-immolations – a form of political protest against Chinese rule – and the challenge of understanding Tibet's turmoil.

Beijing's near-total isolation of Tibet makes it awfully difficult for the outside world to see or understand what is happening there. Presumably, that's part of the point; Chinese rule in Tibet can be shockingly severe, as can the ongoing efforts to assimilate Tibetan people and culture into the rest of China.

The so called moderating China has no interest in whether conforming to the platitudes of free speech, human rights, press and dissent nor those espoused by Marx, Mao and it's own constitution. While dissent may seem compatible within the framework of theoretical communism, it appears to be at odds with the communism practiced in China. In revoking its founders statements, the government's position may seem to oppose the spirit of communism; yet, the choices make perfect sense when considered in the framework of decision-making without ethical considerations, like democracies aspire to do, rather on the basis of what is best for the communist regime.

However, the Paris based global media-watch-dog 'Reporters Without Borders' said "There can be no justification for remaining silent in the face of these flagrant violations of freedom of information, not even the 'respect for sovereignty' that the Chinese government repeatedly cites in response to criticism of its repressive and discriminatory policies towards Tibetans."

The media watch-dog in its annual "Enemies of the Internet" index, which has highlighted China as one of the worst violators of press freedom and one of the Internet's biggest enemies, —still holds among the lowest rankings in recent years.

While moving away from the one-man-dictatorship of Mao's days, President Xi Jinping is unlikely to make the same mistakes made by those formers who have wanted to maintain China's crony capitalism using the Maoist iron fist. What the Chinese people have been hoping for is a change in the philosophy of ruling China with an autocratic, totalitarian regime. But will Xi continue to follow the same six decade old-system in future? Its a big question for everyone.