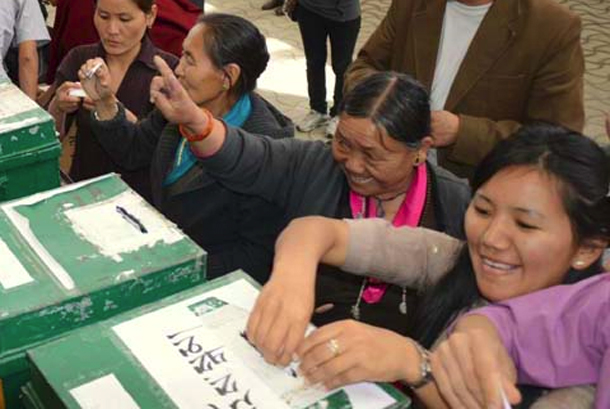 Dharamshala — The upcoming Tibetan elections are a significant milestone for democracy in Tibetan community, as the second Tibetan general election after the complete devolution of His Holiness the Dalai Lama from his political role is fast approaching. The primary election for Sikyong (prime minister) and Chithue (members of parliament) of the Tibetan-Government-in Exile is just a few day away, and the season of Tibetan election campaigning is well underway.

Tibetan government in exile has passed the democratic politics and its involvement test that it has faced in the recent decades. Last few months, unlike previous elections, Tibetans around the world held its most competitive race ever for Sikyong, Prime Minister or President of the Central Tibetan Administration and Chithues, members of the Tibetan parliament in Exile, the positive development of people's involvement in the evolution of democratic system as well as most linguistics in the history of Tibet. The general election is set to occur over the next year and many believe, including Tibetans across the world, the outcome offers an important and positive example of a working democracy.

Perhaps for the first time, it seems a close call, as the general public's participation and interest become a vital role. There is a much wider use of social media to share stories, opinions and information about the candidates via platforms such as Facebook, Wechat, Whatsapp etc. Hundreds of groups on various social media platforms having debates about the candidacies, are seen as a peaceful transition that has set the stage for a democratic change of power, reflect an important social change in the exiled community. This election not only highlights spirits of Tibetan democracy coming alive in exile, but it will be watched closely by people around the world. Various groups have selected their candidates for Sikyong and Chithues, drawn up manifestos and chosen election slogans. Many among the younger generation are counting on its new transformative agenda to carry the day while the elder generation is now boasting a record in governance at both traditional and modern principals.

As a result, the Tibetan government has its own democratic system, and rights including freedom of assembly and free speech are protected. Its leader, called Sikyong, the chief executive, is directly elected by about 150,000-members of exile Tibetan community. A majority of the representatives are viewed as pro-Middle-Way Approach.

Tibetan groups such as National Democrat Party of Tibet, and Students For a Free Tibet groups which stand for independence for Tibet, but do not openly seek a candidate who stands for Tibet's independence. These groups are involved in organising several debates and public forums to strengthen democracy empowerment in the exile community.

There is only one candidate who stands for Tibet's independence, but openly says his standing for the Sikyong elections is not about winning or losing. Many argue that candidates who wants complete independence from China opposition to Beijing would only damage the global support, economy sources, as well as its relationship with China.

The exile Tibetan media is also serious about bringing the debate and discussion back to the real issues, namely the quality of service delivery, good governance and especially the accountability of leaders to our freedom struggle, ensure the survival of Tibetan identity and culture, as well as survival of Tibetan settlement, schools, religious institutions.

We must argue that the elections and campaigns should not be plays of narrow politics, and campaigns may cause an internal crisis while jump-starting individual dreams, without long-term planning or long-term policy strategies for sustaining change in systems or a plan for ensuring the viability of the freedom struggle. The danger being that instead of helping, it will decrease of the current support by international communities, and world governments and parliaments. We must learn and know that raising too much about few individual views may only create such misunderstanding and mistrust that can readily lead to political conflict, driving our community into an unsafe direction.

However we must not forget that democracy is a means of protecting freedom, and the four pillar of democracy must be equally participated. As for freedom of speech and the great "fourth pillar" of democracy, a free press and its accountability must be-respected equally. However, since exile democracy began, recognition is a high priority, but the practical implementation seemed just as a new born, therefore, it must be equally treated at any stage where other pillars perform their duties for attributes of democratic governance such as transparency and smarter accountability in the development processes.