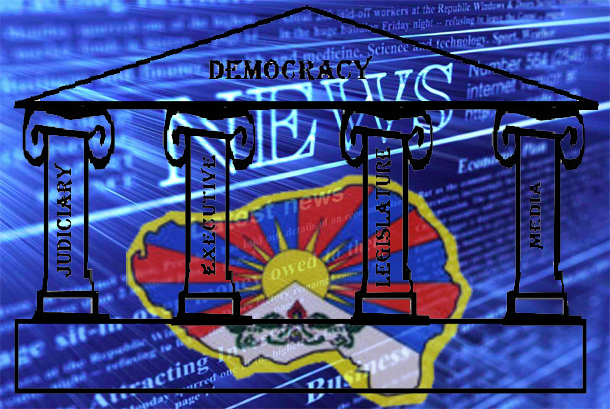 Dharamshala, India — In any modern democratic government system, there must be three principle bodies, the judiciary, the executive and the legislature. Tibetan democracy is not only based on this separation of powers, but also based on cooperative working. Most countries in this modern world claim that the three pillars exist to ensure checks and balances and there is always debate over whether the three organs of the government do justice to the role assigned to them.

However, a new pillar has emerged in the modern world, one that is perceived to represent the opinion of the people and one that is vital in informing and educating; this fourth pillar or "fourth estate" is the independent media. Whether a government is democratic or communist, if this pillar is not given true independence, it will be called government propaganda.

Has Tibetan media evolved as an alternate centre of checks and balances for the other three pillars? Or has it deviated from this path? Four things are required from Tibetan media: It should tell the truth, it should be unbiased and accurate, it should not act to spread propaganda and be completely free of censorship. Tibetan media in exile is inspiring today in all these four aspects. However, some people still argue that it is telling half-truths and even lies, some media groups have ideological or geographical or political bias, and to serve its prejudice it is spreading propaganda.

However, there is a hope that the fourth estate will act as a pillar of democracy for as long as the present political, economic and social structures are moving in the right direction. But without the fourth estate, democracy cannot function properly and will be at risk.

Unlike government propaganda, a free press is the fourth pillar of the democracy, which exercises the right of freedom of speech and expression. The spiritual leader of Tibet, His Holiness the Dalai Lama has famously said he would like to tell the media: "Media people should have long noses like elephants able to sniff out what is going on and then informing the public. However, it is also essential that you are truthful and honest about it. Once the public is aware they can take action accordingly."

As media is considered the backbone of a democracy Tibetan politicians must understand that media plays a crucial role in shaping society. On the other hand, we must keep our faith in the aspirations of the people inside Tibet and dream of Tibetans outside Tibet. In spite of genuine sympathy towards our lost freedom and a powerful role in regaining our lost nation, we must remember that all Tibetans share same extra burden equally.

The media makes aware of various social, political and economical activities happening around the Tibetan world and it can act as a historical record of our freedom struggle, which illuminates to the world the bare truth and the strength of our freedom movements.

Independent media plays an important role as an informative bridge between governing bodies and general public, in absence of this the general public would be unaware of bills and acts that are passed in parliament, and the positive and negative effects in the society. If journalists close their eyes, government officials will be free from scrutiny and able to act for themselves rather than the people they represent.

The Tibetan leadership must ensure they recognise the importance of the independent press as a fourth pillar and understand that it is as important as the other three pillars, which perform duties for democratic governance such as providing and improving financial equality, sustainability and stability, reform and accountability.

Whether it is our ability to impartially report on democratic elections or turn around businesses in the freedom struggle, the exile Tibetan media plays a vital role in the creating and shaping of public opinion and strengthening of society. It has undoubtedly evolved and become more active over the two decades and act as a safeguard between the people and the government, reminding politicians of their duty to fulfill the promises made in their manifestos.

The Tibetan media has made significant contributions in the education of rural citizens who do not have access to schools, raising awareness of events at home and abroad. It has also helped to expose the corruption and malpractices of business and political leaders, allowing the general public to take action against them. The media also exposes loopholes in the democratic system, which ultimately helps successful politicians in filling the vacuums and making a system more honest, accountable, responsive and citizen-friendly.

Without an independent press, society would be like a bird without wings. We live in the age of information technology and we are bombarded by news 24-hours a day. We get the pulse of the world with just a click of a mouse. The flow of information has increased. The perfect blend of technology and human resources (journalists) has not left a single stone unturned in unearthing rampant issues in politics and society.

Tibetan media is more than a news source, it is a movement to expose the truth of Tibet and act against the injustice, oppression and crimes of our society. It also aims to show the truth behind the hustle and grind. We should lift the veil on all issues affecting Tibetan society and the struggle for freedom and illuminate the truth.

With the belief in truth and justice, we must report the news in context and with a complete picture, based on the legacy of freedom fighters who have long-dreamed-of Tibet as a free nation. The people must be informed based on the simple truth that nothing is more important to a democracy than a well-informed public. We will pass a truthful historical record to the next generation by consistently highlighting the truth and ignoring speculation, and this must be retained, and applied, at the very end.