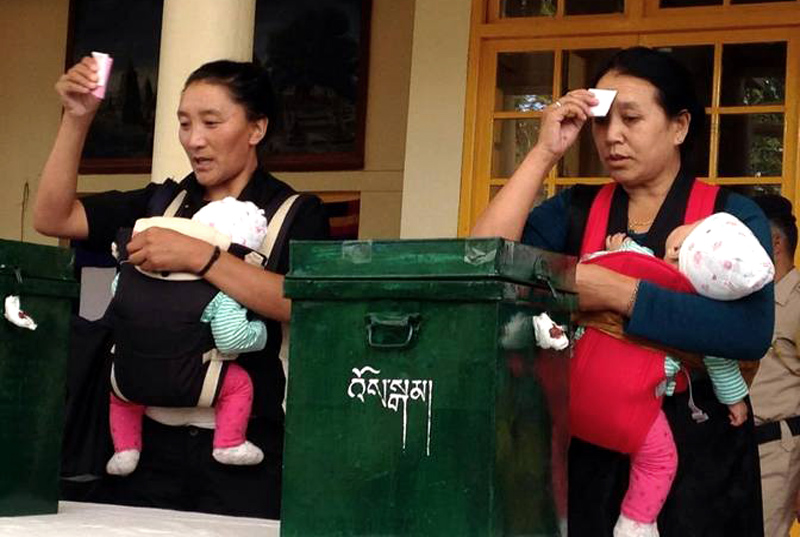 Dharamshala — The 2016 Sikyong and members of the Tibetan Parliament election is one of the most important for the past many years. Not only the Kashag is in play but also the Parliament and, after the devolution of His Holiness the Dalai Lama's political responsibilities to the democratically elected Tibetan leadership, even the future of Tibet. Whoever gets the most votes will be the winner in 2016, and, in this case specifically, it will depend on who can bring the most voters to the polls.

Since 1959, when His Holiness the 14th Dalai Lama, fled to India, Tibetans in exile have managed to keep their religion, culture and language alive. They have successfully reconstituted their institutions in exile, dispersing into cohesive and fluid transnational networks to form a key emerging diaspora. Ever since the Tibetan Government in Exile was established in India, the initial twin objectives of rehabilitating Tibetan refugees and restoring freedom in Tibet were put into action.

As of now, more than 52 major and minor refugee settlements in India (35), Nepal (10), and Bhutan (7) were established along with 80 different schools in the regions. Under the restoration of freedom in Tibet, the Tibetan Parliament in Exile was instituted and hence after the Tibetan Government in Exile became a democratic institution in 1960. Many democratic reforms were subsequently introduced and the most significant one was the direct election of Kalon Tripa (Prime Minister), which is of great importance to the survival of Tibetan issues. This is how the story of Tibetan democracy begins, and as it continues we must remember our roots, and always that accusation is not proof and conviction depends upon evidence.

This year, with the near completion of 60 years in exile and of freedom struggle, diasporic Tibetans are eagerly waiting for the next crucial moment of Tibetan history, which is the upcoming election of Sikyong. With just a few days left, it has already become the talk of on the street of all Tibetan settlements where people show an overwhelming and serious interest, while witnessing an increased general populace concerned about the next Sikyong, which is a good sign of nurturing a healthy democracy. Many group discussions and talks were held, individual opinions, articles and notes were made on newspapers, blogs, Facebook, Wechat, Twitter, and other social media sites, talk shows were aired on radio services, and several websites were created to make people aware about the election. As Tibetan democracy is still young and continuing to develop, we are witnessing many different things happening in this election that were not previously present. some has insisted the talks and debates were successful, but, some still argue that many of them were heavily biased, falling into faulty politics, hypocrisy on full display, and they further claimed that the events are totally against Tibetans' cultural way of life and belief.

What is important to remember in this upcoming election is that it's your decision, not ours or theirs or anyone else's. It's the time for you to decide who you want to lead the Kashag, the highest executive office of the Central Tibetan Administration under the guidance of His Holiness the Dalai Lama and to strengthen the spirit of democracy itself by voting, without losing our cultural identity and religious heritage or core values. The Chinese authorities continue to state that the so-called 'Tibet government-in-exile' is utterly illegal and holds no authority; it can neither represent Tibet nor the Tibetan people. Therefore, once again we have to prove their claims wrong.

In 2006, 32,205 of 72,000 registered voters exercised their franchise. In 2010, exile Tibetan participation in the Kalon Tripa election was another test with estimated 30% of those eligible to vote or above 18 years old and 44% among registered voters. Estimates show that some 120,000 of the approximately 150,000 Tibetan exiles worldwide are above the age of 18 and are eligible to vote. The Commission said that it has registered 88,326 voters of which 47,105 voters cast votes for the Sikyong poll, which is 53.33 percent voter turnout. Whereas, 46,890 votes were cast in for the Member of Parliament poll, which figures to 53 percent voter turnout.

However for those of us here in exile who are able to vote, we must remember our priorities as Tibetan people. Some of us within Tibetan society have different first priorities; whether it is independence or middle-day, improving our democracy or protecting our culture. While democracy serves us well, we did not come to India to found a democracy. We came to India to preserve unique Tibetan religion and culture and to continue the Tibetan freedom struggle. So as we cast our votes, we should remember that democracy is a means for our end. Democracy helps us to justify to the world our struggle for freedom, to prove that we function as an independent body, however within the politics we must remain faithful to our cultural identities and struggle.

We need to hold onto our hope unswervingly that those countries which advocated freedom to Tibetan people during the past six decades will continue an increasing amount of support and respect the aspirations and sacrifices of Tibetan people. Simultaneously, we must frequently remind them that their rendering political, moral and diplomatic support has been crucial to Tibetan freedom struggle and will continue to be until Tibet achieves its goal. However, if voting merely for the sake of proving to the world that Tibetan democracy is alive, then be moved by the freedom fighters who have sacrificed their precious lives for the cause of our freedom. They have entrusted us with the responsibility of utmost important to excercise the rights we have here in exile and continue their struggle for freedom in Tibet, lest their sacrifices be in vain.

By excercising the right to vote that has been graciously given to us by His Holiness the Dalai Lama and our responsibility to those Tibetans who have come before us, voting in this election is imperitive. Unlike Communist regimes, the system of checks and balances is an important part of the branches of government. It is up to each of us to successfully implement democracy in exile which will help to further our freedom movement and to continue the efforts to protect and develop our unique and distinct culture, religion, language and identity,which should continue to always be the top priority. We must grow in knowledge, particularly in the history of freedom struggles and how people have risen united against imperial regimes which are suppressive, repressive, discriminatory and exploitative, and we must define the difference between being a freedom fighter and merely parroting freedom without taking action. The purpose of our democratic election is not only for the immediate benefit of our society, but also an opportunity to showcase to the Tibetans in Tibet, to the world and to China that we have a better alternative which can be adopted and implemented once we return to a free Tibet.