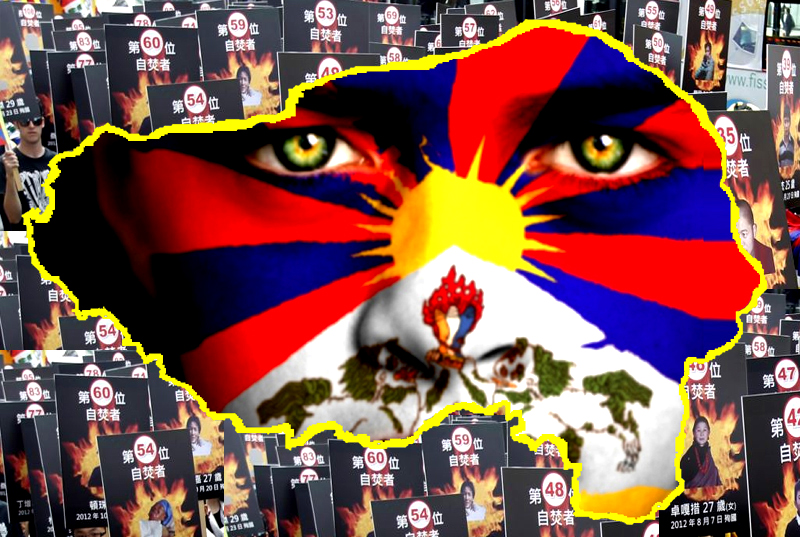 Dharamshala — The root causes of protest by Tibetans in Tibet against the Chinese communist regime, including self-immolations, stem from a wide range of factors such as, violent political repression, cultural assimilation, economic marginalisation, ethnic discrimination, nomadic displacement and environmental destruction.

Everyone knows the China's Communist government has and continues to implement such hardline and cruel policies in Tibet. The peaceful Buddhist country was invaded by Communist China in 1949 and since that time over 1.2 million or one in six Tibetans have been massacred, over 6,000 monasteries have been destroyed, and thousands of Tibetans have been imprisoned.

In occupied Tibet, prominent leaders, intellectuals, writers and civil society members have deplored the worst human rights situation in the territory, demanding that the international community to intervene without any further delay. Violations include, no freedom of speech, religion, or press and routine arbitrary detention. However, recently there has been little response internationally and the authorities in Beijing have responded by tightening their grip, isolating Tibet even more from the outside world. All it would take is a concerted effort from the citizens of Earth to stand up and say "NO!" to the corporations and governments that continue to abuse Tibet's people and misuse it's resources. The struggles in Tibet are symbolic for every human rights struggle.

During the recent annual ceremonies or festival almost all areas of Tibet, particularly the capital Lhasa, still remain under virtual martial law and today, just as in the past, China refuses to acknowledge its human rights abuses. Even North Korea recently told the world that it will "respond sternly to pressure and attempts to change its regime using the pretext of protecting human rights." China is not only the world's worst offender for human rights but it is also topped a list of countries jailing journalists in 2015 with a total of 199 journalists in prison due to their work last year, according to the New York-based Committee to Protect Journalists. Going into 2016, President Xi continues to use the pretext of national security to clamp down on dissent.

It is clear that human rights abuses by the Chinese continue under the CCP and worryingly, appear to be growing - a situation which cannot be left unabated. Internationally, the response has been silence, even from professional United Nations bodies, which are entrusted to maintain law and order and ensure the highest standards of respect for the rule of law, basic human rights and democratic values, amongst others.

One of the most tragic repercussions of Tibetan oppression is self-immolation. This shocking form of protest, which happens mostly within Tibet, symbolises the desperation and feeling of powerlessness felt by Tibetans. It has also caused many government representatives, activists, academics and editorialists to urge international institutions to put pressure on the Chinese government to provide justice to the heirs of the tragedy.

Tibet has recently witnessed the biggest wave of self-immolation protests in history. In 2012 alone, roughly thirty-five Tibetans have set themselves on fire with the overwhelming majority of self-immolators residing within Tibet, almost exclusively in the regions of Amdo and Kham. Since 2009 143 self-immolations have occurred with Tibet and out of those 143, 124 have died. The remaining 19 are either critically injured or their status is unknown. Nearly all of these self-immolators have called on the Chinese government to allow the return of His Holiness the Dalai Lama to Tibet and freedom for Tibetans.

Political protest by self-immolation followed the barbaric acts committed by the Chinese government in 2008. As Tibetans marked the anniversary of His Holiness the Dalai Lama leaving Lhasa, demonstrations erupted into violence and more than 220 Tibetans were brutally killed and over 1,294 were seriously injured. Over 5,600 were arrested, 290 sentenced and more than 1,000 simply disappeared.

Many of those who were detained were tortured, a practice that continues to this day and one China repeatedly denies. Prisoners are regularly subjected to brutal torture, citizens who are seen to break rules endure brutal beatings and Tibetan women face forced abortions and sterilization. Even within China itself, massive human rights abuses are widespread with an estimated 20 million Chinese citizens working in prison camps.

Sadly even after the passing of six and a half decades and cries of desperation from the people, no progress has been made. China's occupation of Tibet is one of the worst examples of state terrorism and human rights violations that has ever been witnessed. Victims and family members have reported that none of their heirs of the tragedy have ever received a judicial commission report and the courts consistently fail to provide justice.

To fulfil its purpose the UNHRC must review the cases of self-immolation, examine the evidence of violence from 2008 and demand an end to arbitrary detentions and torture. They should also arrange for an independent, impartial, and fair fact-finding mission to Tibet to investigate what is happening on the ground, rather than rely on biased reports written by Chinese state officials.

However, the communist regime exerts pressure on the UN to deny accreditation to high-profile activists outside Tibet and China. It is the responsibility of the international community to call upon the UNHRC for equal participation from human rights victims and demand more transparency in operations. There's a very clear signal that Chinese authorities regularly influence the UN to bar Chinese, Uyghur, Mongolian and Tibetan activists from attending the Human Rights Council sessions and despite a wide-spread crackdown since president Xi Jinping took office two years ago, there has been little objection to these people being labeled "separatists, terrorists or criminals."

One of the positive steps recently taken by the UN was recognition by the Committee Against Torture (CAT) of widespread torture and ill treatment of prisoners in China, is followed this with a call for broad legal reform. The panel of 10 independent experts highlighted particular concern over the Chinese government's reluctance to provide information on few Tibetan cases, each involving allegations of torture, deaths in custody, arbitrary detention and disappearances.

They also showed concern over allegations of deaths in custody as a result of torture or lack of medical care. They called for an independent investigation into a number of these cases including the death of Tenzin Delek Rinpoche, a highly revered Tibetan Buddhist leader who died in a Chinese prison in July after his health deteriorated as a result of harsh prison conditions. His death sparked international condemnation and protests.

The use of torture is dishonourable. It corrupts and degrades the state that uses it and the legal system that accepts it. Tibetans are tortured until they abandon their own views and beliefs. China wants to eliminate the cultural identity of Tibetans and force them to become supporters of the Chinese regime. Sadly despite the findings of the CAT, China is feeling less pressure from Western governments at the UN these days.

Many regimes have brought no resolutions against China since the Human Rights Council was formed in 2006, while the council's predecessor body, the UN Commission on Human Rights, brought however few resolutions against the country from 1990 to 2005. Beijing used money to block them all, except in 1995, when a resolution was brought to a vote but rejected. Many argue that the UN bodies do not want to be committed to the principles of the Rule of Law, democracy and human rights. Notwithstanding that, there is certainly room for debate over whether the Universal Declaration of Human Rights (UDHR) is probative and equal for all.

When the world came out en-masse to celebrate the appointment of Xi as China's President by the National People's Congress in March 2013, they were taken by his "Four Comprehensives", which included promises of "Reform", fulfilment of "the Chinese Dream," and "the great renewal of the Chinese nation." He also followed the mantra of previous Chinese leaders who promised to eradicate corruption. However, none have approached the issue with as much urgency as President Xi who used it as a political tool and twisted anti-corruption probes to target peaceful activists, political dissidents, religious believers and minority groups, which he labeled as potential "threats" to social stability.

In a letter purportedly from Chinese communist party members called for Xi's resignation from all state and Party leadership positions, posted to state-linked Wujie News website on March 4. The letter further stated: "We also see the main goal of the anti-corruption campaign to be merely a power struggle." A few years later, independent media and social media served as a platform for debate after the prominent Chinese lawyers and Human rights defenders, sparked conversation over whether or not the president's anti-corruption fight was a political distraction rather than good governance. The debate showed that a large number of the population believed it was a political ploy.