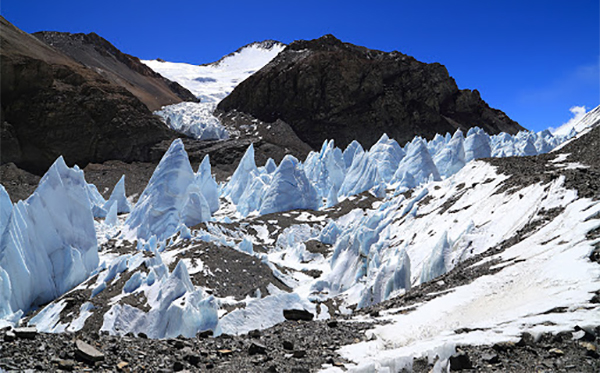 Dharamshala, India – Tibet’s land sits on huge natural reserves of minerals, minerals largely untouched for centuries until China’s exploitation of these resources. The mining and extraction projects initiated by China have only been increasing, and they are now impacting Tibet’s environment and its people. The biggest impact has been on the glacial structures of Tibet.

The Tibetan geographical region is covered by an extensively elevated plateau, called the Tibetan plateau. It occupies an area of 2.5 million sq.km and has an average elevation of more than 4,500 meters, this makes it the biggest and the highest plateau in the world.

There are a multitude of river sources in the Tibetan Plateau, along with it are a vast array of glaciers. Glaciers become an important factor for the people living in the regions surrounding it, as they are one of the few sources of fresh water for those people. This has indeed proven to be the case for Tibetans.

The typical geographical landscape in Tibet is that of large mountain ranges, lakes and rivers. The landscape includes geographical features that might have formed out of depleting glacial structures at some point in the past. Therefore, there has been a clear and long standing reliance by Tibetans and people in other regions, over the vast number of fresh water sources provided by the glaciers. The glaciers as a resource extend support to people directly in providing drinking water, continuing agriculture, making use of hydropower and keeping up many more livelihoods.

The most significant threat to this lifeline comes from climate change, as the glaciers are now shrinking at a faster rate with every coming year. Glaciologists refer to the Tibetan plateau as “the third pole”, due to its largest reserve of snow and ice sheets after Antarctica and the Arctic. But now with increased pollution, a rise in global temperatures and a quarter of its ice already melted, “the third pole” is coming close to an inevitable depletion. Out of the world’s population, nearly 20% depend upon the freshwater coming from these glaciers. This clearly proves how much this crisis can negatively affect a number of countries and its people. The continued exploitation of resources by China is playing a huge role in feeding into this crisis.

The Intergovernmental Panel on Climate Change released a report in 2019, regarding the cryosphere i.e. portions of Earth's surface where water is in a solid form. The report warned that two-thirds of the region's remaining glaciers are at the risk of depletion, at the very least by the end of the century. The key thing to note is that the Tibetan plateau is experiencing an increased rate of rise in temperatures then the rest of the world, by 0.3 Celsius per decade. As written earlier, the first set of people who will suffer the consequences will be people who have direct reliance towards the fresh water source that is the glacier, and so this becomes an important environmental issue in need of immediate attention from the rest of the world.

People have already seen gradual changes in the way they operate, one good example is agriculture, as there is increased flooding in the spring and water shortages in the summer. Places such as Ladakh in North-Eastern India and major parts of Tibet include high-altitude deserts, and they already see a loss of their glaciers and with that loss comes seasonal irrigation overflows, negative impacts on fisheries and destruction of river ecosystems. The World Bank has estimated a decline in crop yields of up to 30 per cent in South-Asia in the coming decades. Rice yields and fish production will also be heavily affected due to rising temperatures.

The third pole has vast frozen reserves of fresh water and as it melts and makes its way down to the low-altitude rivers and oceans, it is contributing to a sea-level rise. A sea-level rise of this degree can potentially make life difficult in the heavily populated deltas and bays areas of many South-Asian countries. Another threat to come from this could have fatal consequences, as the melted glaciers also release dangerous pollutants and gases. Glaciers work as time capsules; their thick sheets of ancient ice can have viruses that existed centuries ago. Previously banned pesticides such as Dichlorodiphenyltrichloroethane and perfluoroalkyl acids are finding their way downstream through melted water, thereby potentially becoming part of the food chain. As temperatures rise, the glaciers also release methane which is a gas stronger than CO2, further increasing the effects of climate change.

An abundance of scientific evidence now points towards this climate crisis being a bigger threat than previously estimated. India, Nepal, Bangladesh, Bhutan, Laos and other Asian countries are at risk of experiencing the early effects of this crisis in the coming years, if it is not addressed in time. Tibet has seen a complete change from being untouched to now being a mining site for minerals. The repercussions of these excavation projects are now being put into the spotlight, and how they have played a huge role in drastically increasing the fatal effects of climate change.