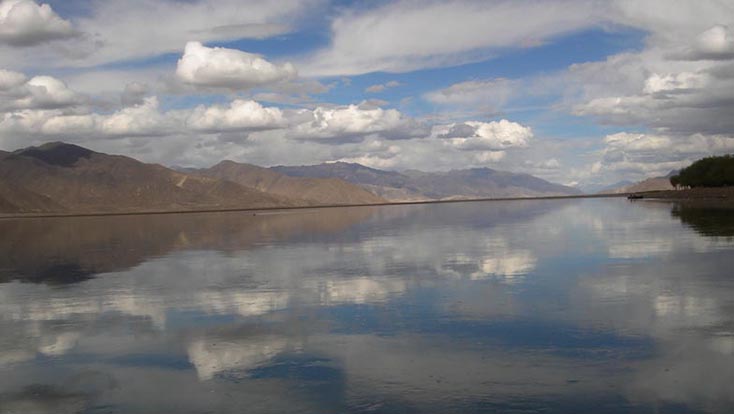 Dharamshala, India — Tibet is known as the ‘Water Tower of Asia’ as it serves as the source of ten major Asian river systems flowing into ten Asian countries. The Chinese plan to build large dams in Tibet is causing issues for countries downstream.

China’s strategic 14th Five Year makes it clear that they plan to build a mega-dam in Tibet which shall be capable of producing ‘triple’ the electricity currently generated by the Three Gorges Dam.

Three Gorges Dam is the world’s largest running power station on the Yangtze River in Central China. The Super Dam project has Tibet’s Medog County as its base, the structure will reach the Brahmaputra River before the waterway leaves the Himalayas and flows into India.

China’s strategic policy with neighbouring states over trans boundary rivers highlights three important principles: firstly, China is likely to face serious water shortages in the future and so will begin to direct water flow from the Brahmaputra river to its dry north. Secondly, it can prove to be difficult for downstream countries as it is likely to disrupt the supply of water. Lastly, China is unwilling to sign any bilateral or multilateral treaty with any neighbouring states over trans boundary water-sharing arrangements, this shows Beijing’s assertion in claiming absolute sovereignty over water, proving to be detrimental for downstream countries.

"Building a dam the size of the super-dam is likely a really bad idea for many reasons," said Brian Eyler, energy, water, and sustainability program director at the Stimson Center, a US think tank. Besides being known for seismic activity, the area also contains unique biodiversity. The dam would block the migration of fish as well as sediment flow that enriches the soil during seasonal floods downstream, said Eyler.

There are both ecological and political risks, noted Tempa Gyaltsen Zamlha, an environmental policy specialist at the Tibet Policy Institute, a think tank linked to the Tibetan government-in-exile based in Dharamshala, India. "We have a very rich Tibetan cultural heritage in those areas, and any dam construction would cause ecological destruction, submergence of parts of that region," he told AFP.

Until recently, China’s policy in the Himalayan region was primarily focused on cross-border power relations with India and a defensive strategy to safeguard Tibet. With the introduction of major plans like the Western China Development Strategy (Xibu Da Kaifa) and the West-East Electricity Transfer Project ( Xi Dian Dong Song), China aims to position Tibet as a trading hub in the Himalayan region where the extraction of Tibet’s natural resources are supposed to fuel the economic engines of eastern China. Chinese officials firmly believe that Tibet’s untapped water resources remain an important goal for Chinese authorities to exploit in the name of economic integration and stability.

It is important to note that the Tibetan reservoir happens to be the largest known water reservoir in the world, all the major river systems of Asia including Yarlung Tsangpo (Brahmaputra), Machu (Yellow River), Drichu (Yangtse), Senge Khabab (Indus), Phungchu (Arun), Gyalmo Ngulchu (Salween) and Zachu (Mekong). It is a major segment and important mechanism for the river systems to sustain in South Asia, nearly 29 % of the world population is dependent upon it for its survival.

Tibet is also known as the ‘Water Tower of Asia’ as it serves as the source of ten major Asian river systems flowing into ten countries, including many of the most densely populated nations in the world: China, India, Pakistan, Nepal, Cambodia, Laos, Thailand, Vietnam, Burma, Bangladesh, and Bhutan.

The mega-dam is proposed inside the Grand Canyon of the Yarlung Tsangpo, where the river drops by 2,000 metres in a short span, making it an ideal place to harness generate hydroelectricity. This has the potential; to be the world’s largest dam, providing some 300 billion kilowatt-hours of power every year. The large-scale damming of the river is likely to affect the water flow downstream in India and Bangladesh. Yarlung Tsangpo is called the Siang as it enters Arunachal Pradesh from China. The river flows for about 1,625 kilometres in Tibet, parallel to the main range of the Himalayas, before entering India in Arunachal Pradesh. The Siang as it is known flows down the Himalayas, enters the Assam valley, joins two other major tributaries, Dibang and Lohit, and together they become the Brahmaputra. To mitigate the adverse impact of the Chinese dam, India could also create a battery of reservoirs in the Dibang valley that will ease the outflow and try to offset the changes happening in the upstream reaches of the river.