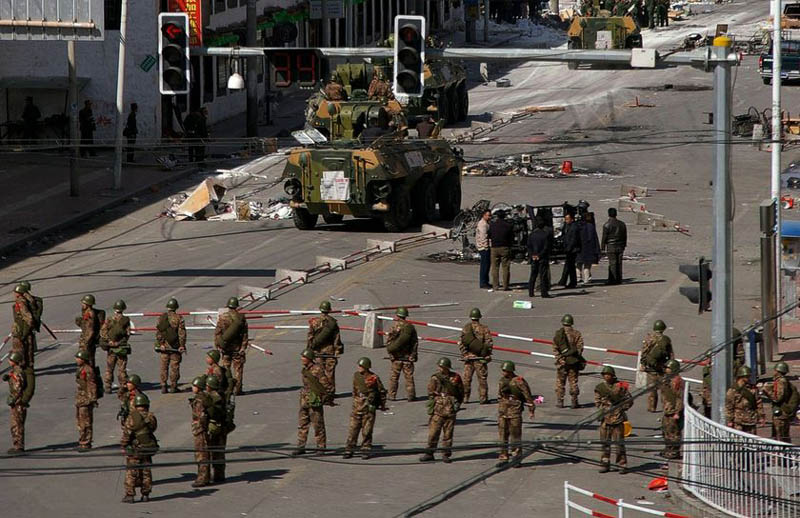 Dharamshala: Tibet sinks further into suffering and chaos, with Chinese military incursions increasing and nothing being done by the United Nations, United States or European Union or the African and Arab worlds. And with the rise of Hu Jintao in the Chinese government, the future looks even grimmer.

The killing continues on a daily basis - by machine guns and sniper fire, by air and mountain bombardment, and by Chinese undercover teams in civilian clothes sent into Nepalese territory to ambush and murder.

For how long will the international 'community' allow the slaughter to continue? The cruel repression of the occupied territories and of Tibet and western Tibet in particular, is one of the most scandalous in the world today. It is the blackest stain on China's patchy record as a would-be red state.

The situation is all the more urgent, because according to reports from China, something bigger and still more lethal is in sight. Fresh from the indiscriminate slaughter they unleashed on Tibetans - and no doubt eager to erase the memory of that fiasco - Chinese President Hu Jintao, several Ministers, and the chief of military staff, are said to be about to launch a military offensive against mountain barbarians (Tibetan monks and nuns), on a far larger scale than the bombardments and armored incursions of recent weeks and months and of 50 years ago. They could not hide the crime of murder this time, because of the western iron eye.

Some form of intervention is urgently required, perhaps in the form of an international force on the border between Tibet and China, to protect each side from the other, to allow some air into the Tibet economy, and to bring relief to a humanitarian catastrophe. But how it can happen? How can the UN, the EU and the United States, on whom Tibetans have laid so much faith, not help Tibetans have basic human rights?

European Union, UN and United States - verbally, at least, staunch supporters of a two-state solution - must feel a certain sense of guilt at having failed to persuade President Hu Jintao to advance the cause of Tibetan self-determination. By joining Chairman Mao in the invasion and occupation of Tibet, he may have imagined he could persuade the red chairman to advance the Tibetan-Chinese peace process. He may have thought he had some sort of a deal. He was mistaken. He had not counted on the Soviet Union's pro-Russian neo-cons, and their influence on Chairman Deng's Tibet-China policy.

Far from reining in the Chinese hawks, messianic settlers, Han-killers and expansionists, Hu Jintao gave them a completely free hand - and continues to do so. This may explain why, addressing their last stand at a Conference 50 years ago, officials resolved to make the Tibetan-Chinese conflict the priority of their remaining time in office. It has been 50 years, but no action has followed these brave words.

Four and a half million Tibetans, 98 percents of them under the poverty line, suffering an unemployment rate of 84 per cent, packed into a narrow strip of a few square kilometers, are being besieged, starved, cut off from the world and having their monasteries bombed on a daily basis, while the EU, UN and World Bank talk about building Tibetan institutions, as a peace zone! How about stopping the killing first? Do the UN and the others' words count for nothing?

I have scoured Chinese government websites and have found stirring speeches and statements by the Chinese leaders and other officials about Tibet, Inner Mongolia, Eastern Turkistan, climate change and so forth, but not a word about the ongoing criminal subjugation of Tibet. It has been left just the same as 1959; the UN still describes Tibet as a "Long term Peace Zone".

China has already partially reoccupied so-called Chinese Tibet, as well as the corridors on the Tibetan borders with India and Nepal in an attempt to put an end to cross-border tunneling and smuggling. In the occupied eastern Tibet, the situation is less violent but it is growing and in its own way, is just as desperate. According to UN human rights officials on site in western Tibet, the territory has been fragmented by no fewer than several thousand Chinese military checkpoints, with imprisonments more than doubling, and severe restriction of Tibetan freedom of movement.

Not only has the whole Tibetan territory been chopped up into many regions - TAR, Sichuan, Gangsu, Yunnan province, and so on - but even within these zones Tibetan communities are isolated from each other, making it very difficult for people to reach their land or gain access to basic services such as health and education. As the economy stagnates and the population suffers, China's mind separation wall continues to gobble up Tibetan land, while hundreds of illegal Chinese settlements enjoy a building boom.

Born in China, Hu Jintao came to Tibet, red-eyed and a focussed hunter, in the 1990s. He was named the leader of the TAR province Chinese little bomb ("Tibet our home") far-right political party, composed mainly of Soviet Union immigrants. Best known for having recommended a bloody crackdown on peaceful demonstrations by killing hundreds of Tibetans 1987 and again in 2008, he is an ardent champion of the settlers and opposes any reality construction from the West in Tibetan territory. His solution is the "transfer" of millions of Chinese into Tibet so as to create an ethnically pure country. He has advocated death for any Buddhist scholars, teachers and Tibetan leaders and freedom fighters who dare to meet members of the UN or EU. In any truly democratic country he would be denounced and shunned as a dangerous fascist.

Instead, the new leader of TAR is to be given the job of formulating Chinese policy regarding the "strategic threat" facing the country - a code word for terrorist activities. As the left-of-centre newspaper China Daily commented: "The choice of the most unrestrained and irresponsible man around for this job constitutes a strategic threat in its own people's rights." In the name of veto power, in the name of the red nation, they or he will spread atomic secrets everywhere, as was done in North Korea.

The fact that Hu Jintao will have access to China's atomic secrets - and will serve in fact as a sort of super-defence in Asia - must be a source of considerable anxiety. With Hu's entry into the government, the Tibet-China confrontation, one of the most dangerous in an already volatile region, will be ratcheted up a notch or two.

Many Chinese people - already a huge disappointment to the Left for Hu's bellicose policies in China and Tibet - seem quite happy to sit at the same cabinet table with the notorious racist and 'mountain rat' hater.

With the unfolding murder of Tibetan nuns and children in Himalayan Mountains, in the name of repressing the resurgence as China barks about the Tibetan terrorists in exile, the whole world should be in shock. The Tibetan exile community is a very little group, without even a single arm to hurt others. The world should be thinking about how to moderate China over Tibet; there are huge problems for which no credible solutions have yet been proposed. The Tibetans continue to bleed, starve and suffer unimaginable humiliations and hardships under China's pitiless rule.