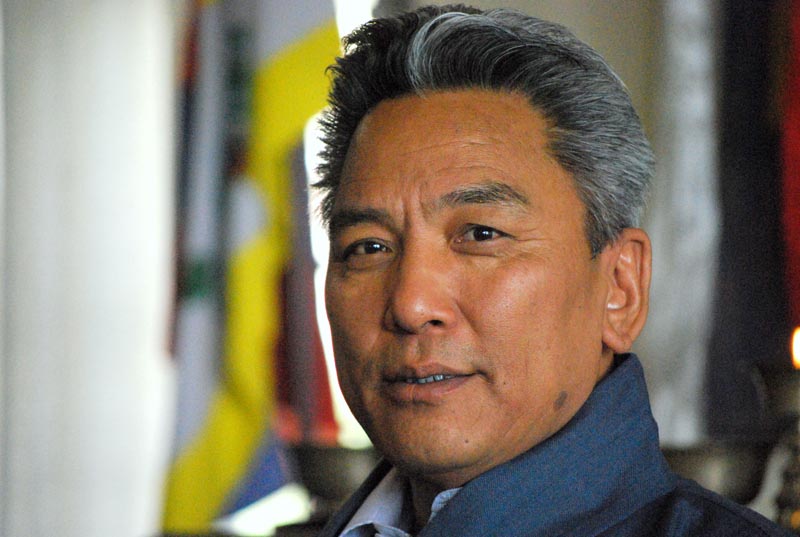 Dharamshala: - Once again the small Tibetan world in exile seems to be torn apart by an emotional and political dispute over the devolution of the administrative and political powers of His Holiness the Dalai Lama to the democratically elected organs of the Tibetan Administration and over the change of the title of "Tibetan Government-in-Exile" in Tibetan language to "Central Tibetan Administration". The tone of the debate is often agonizing, bitter and self-lacerative reflecting the self-pitying and self-dramatizing psyche of some of the debating Tibetans. This way, the discourse has so far been rather self-defeating and demoralizing than helping to clarify and better understand the issues involved.

The primary objective of these changes is to ensure the continuity of the Tibetan freedom struggle led by the Central Tibetan Administration. The changes demonstrate the political will and determination of the Tibetan leadership to continue the Tibetan freedom struggle as long as it takes by laying the ground and positioning itself in a way that allows it to function and operate in future in spite of any vicissitude in the international political environment. The devolution of His Holiness the Dalai Lama's political powers to the democratically elected leaders of the Central Tibetan Administration is to be seen and understood as a demonstration of his faith in the political maturity and determination of the Tibetan people - especially the younger generation of Tibetans inside Tibet as well as in exile.

This is, I believe, the central message that the changes embody and the Tibetan leadership wishes to convey to Tibetans, the Chinese leadership and the international community.

This is clearly an initiative that demonstrates strength, self-confidence, determination and resourcefulness on the part of the Tibetan leadership. This spirit of steely political will and commitment to our freedom struggle is evident from the amendments to the Charter of the Tibetans in exile. The amendments make it clear that His Holiness will fully vest the Central Tibetan Administration and in particular its democratic leadership organs with the powers and responsibilities formerly held jointly by him and the Central Tibetan Administration to represent and serve the whole people of Tibet. The new preamble to the Charter underlines "safeguarding the continuity of the Central Tibetan Administration as the legitimate governing body and representative of the whole Tibetan people, in whom sovereignty resides". It also enshrines Tibet's position as a sovereign nation from the early 2nd century BC until the invasion by the People's Republic of China in 1951, and His Holiness the Dalai Lama's efforts in introducing democratic reforms after coming into exile in India since 1959.

Against this background there is absolutely no basis to contend that the Central Tibetan Administration has given up the mandate to represent the entire people of Tibet as a consequence of the recent changes. On the contrary, politically and legally the legitimacy of the Central Tibetan Administration to represent the Tibetan people has been strengthened by completing the process of democratization. Sovereignty resides with the people of Tibet. Consequently, the more complete the Tibetan authority is constituted by a free and fair democratic process the greater its legitimacy to represent the aspirations of the Tibetan people.

On arriving in exile in India in 1959 His Holiness the Dalai Lama stated that wherever he and his Kashag (Cabinet) are the people of Tibet will continue to consider them as their government and true representatives. His Holiness established the Central Tibetan Administration under the direction of his Kashag in order to actively pursue the cause of Tibet, to draw the attention of the world to the tragedy unfolding in Tibet and to seek the international community's help in protecting the Tibetan people as well as to look after about 80'000 Tibetan refugees arriving in India.

Right from the beginning of our exile it seems that it has been of great importance to His Holiness to make clear that he is not staking any claims to power and rule for himself and or his administration. The primary task of our exile has always been to seek justice for Tibet and to restore the basic rights and freedoms of the Tibetan people.

Every Tibetan with some sense of political awareness and responsibility knows that one of His Holiness' political credos has always been: To hope for the best and to prepare for the worst. In the past decades of our freedom struggle the Tibetan people and the cause of Tibet have been served well by and have benefited immensely from this wise approach of His Holiness.

It is no news to people with an interest in China that Beijing has been demonstrating in recent time that it won't be shy about playing hardball to safeguard what it claims to be its "core national interest". China watchers attest to a reawakened resolve on the part of the Chinese leadership to do whatever it takes to defend "core interests" such as their claims regarding Taiwan and Tibet. The Central Party School strategist, Gong Li, is quoted as saying "Beijing should not yield a single inch as far as Taiwan and Tibet are concerned". It is an open secret that China uses coercive diplomacy on other countries to assert its position. A good example is, among a growing number of other cases and signs, of the use and impact of China's coercive diplomacy are Nepal's recent policies towards our compatriots in that country. It is common knowledge that the acceptance and adherence to the principle of "One China Policy" is a precondition by China for the resumption of diplomatic relations with any government in the world.

Looking ahead and taking precautionary measures with the aim to coping with any political vicissitudes in the future is an act of responsible and prudent political leadership.

Far from appeasing China these initiatives by His Holiness represent a number of new challenges to the Chinese leadership. First of all they dismember the basic tenets of the Chinese justification propaganda narrative of "liberation", as well as of their claim that the Dalai Lama is bent on the "restoration of feudal theocracy" and they bring into question their calculations on the issue of reincarnation. On a more practical and concrete political level His Holiness the Dalai Lama is once again making unambiguously clear that he has no personal demands to make to the Chinese leadership. He is putting the rights and welfare of the Tibetan people right in the forefront of the Sino-Tibetan dialogue. He is making clear that the fundamental issue that needs to be resolved is the faithful implementation of genuine autonomy that will enable the Tibetan people to govern themselves in accordance with their own genius and needs.

By devolving his political powers His Holiness is once again emphasising that his engagement for the cause of Tibet is not for the purpose of claiming certain personal rights or political positions, nor in order to stake claims for the Tibetan administration in exile. Once a satisfactory agreement with China is reached, the Central Tibetan Administration will be dissolved and it is the Tibetans in Tibet who should carry the main responsibility of administering Tibet.

The change of the title in Tibetan of our Administration only reemphasises this basic position of the Central Tibetan Administration without renouncing the legitimacy of representing the voice and aspiration of the people of Tibet.