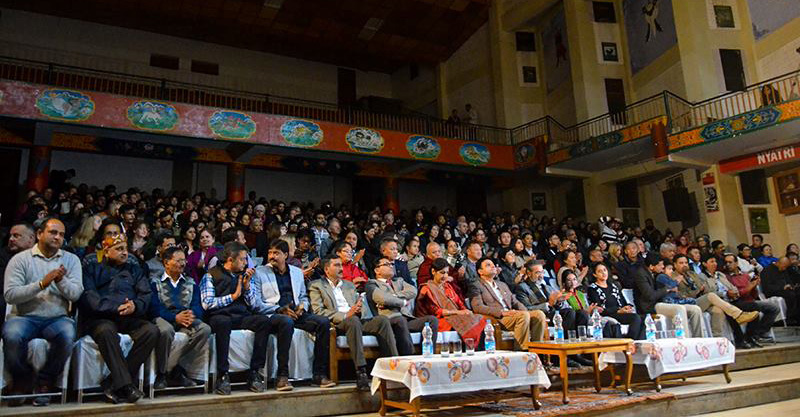 Dharamshala, India—Cinema is arguably the most powerful medium to tell stories, especially in a society that faces social, cultural and political obstacles. Films are a great way to communicate the reality of the Tibetan way of life, something the world knows so little about. Due to censorship, there is a wide gap of knowledge of Tibet’s rich history and culture in other parts of the world but films have begun to change that.

Tibet’s culture, natural scenery and struggles have been a source of inspiration for many filmmakers and documentary makers across the globe. Many non-native directors have shown interest in Tibet as a subject. Mainstream Tibetan films by foreign directors include ‘The Saltmen of Tibet’ by German director Ulrike Koch and ‘Himalaya’ by French director Eric Vall. Jean-Jacques Annaud’s ‘Seven Years in Tibet’ and Martin Scorsese’s ‘Kundun’ put Tibet on the map of popular cinema. Despite this, Tibet remains a land of mystery as filmmakers still face challenges to document the heritage, landscape and the lives of people.

Tibet and the Tibetan culture were depicted in films through symbols such as temples, worship and pilgrimage. Most films made by outsiders showed serene snow-capped mountains and shepherds grazing their sheep on vast plateaus which were very typical etic views of the culture. The stereotypical representation of Tibet in films has gradually changed.

In recent years, many films have started to explore the ordinary life of the Tibetan people, including their lifestyle, traditions, and religion, leading to diversified genres with different themes. This can be attributed to the rise of Tibetan filmmakers telling stories about their ethnic identity and of struggles faced by people forced out of their homeland. These stories have shattered the traditional view that outsiders have of the region. Filmmakers now are determined to go back to the stories, instead of just focusing on the exterior elements.

Director Pema Tseten(Tseden) is a leading figure in Tibet’s emergent cinema. His work has helped foster a new generation of Tibetan-language filmmakers known as the “Tibetan New Wave,” and has won many awards in acclaimed international film festivals. His work shows the cultural vibrancy and sheds light on the social concerns of contemporary Tibet to a global audience. He is a director who has managed to work within the censorship-heavy system while still producing films and stories that resonate with audiences. His films are now made almost entirely with Tibetan cast and crew members. His films are thematically based on Tibet - showing how changes caused by modernization affect the lives of rural Tibetans or the conflict between Tibetan culture and the Chinese way of life.

His film ‘Old Dog’ depicts authentic Tibetan culture and delves deep into the Tibetan psyche, conveying a sense of anguish resulting from a changing society. His film ‘The Silent Holy Stones’ shows Tibet through the details of the everyday life of a monk. He tells personal stories in order to break away from the superficial nature of depicting ethnic minorities on screen. Directors Sonthar Gyal and Agang Yargyi are other emerging filmmakers who prefer to tell stories from a native perspective. These films, amongst many others have been screened at various international film festivals, putting forward the issues of Tibet on a global stage.

In India, the Dharamshala International Film Festival (DIFF) founded by directors Ritu Sarin and Tenzing Sonam, is an independent film festival that aims to promote films from the Himalayan regions. Their critically acclaimed feature films ‘Dreaming Lhasa’ and ‘The Sweet Requiem’ based on similar themes, have been screened at numerous film festivals.

Tibetans have taken to cinema to represent a community in exile, masterfully crafting subtle yet political stories in a land that is scarcely represented. This self - representation by Tibetan filmmakers has helped to foster an understanding of the community by portraying the reality that outsiders rarely get to witness.