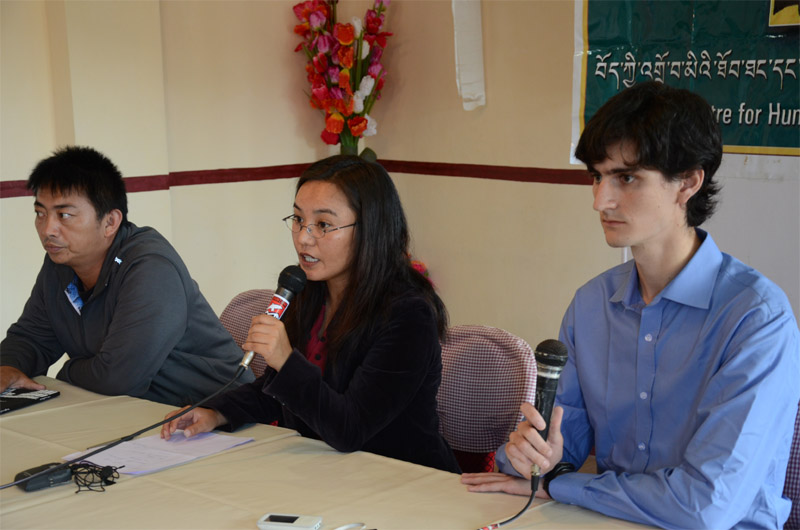 Dharamshala: On 26 June 2013, The Tibetan Centre for Human Rights and Democracy (TCHRD) held a press conference to commemorate the International Day in Support of Torture Victims and discuss the current Human Right violations in Tibet by the Chinese government.

On 3rd April 2013, Jigme Gyatso, a political prisoner was released from Chinese prison after 17 years of imprisonment during which he was not only physically but mentally tortured and exploited. Today, three months after Jigme Gyatso's long-awaited release from prison, is the International Day in Support of Torture Victims as he struggles with his broken body to live again.

This day commemorates the entry into the force of the Convention Against Torture, Cruel, Inhuman and Degrading Treatment on 26 June 1987 with the goal of eradicating torture.

The panel consisted of three members who spoke about the state of political prisoners in China, the legal framework involving prohibition of torture and a book written by a Tibetan teacher. Tsering Tsomo, the director of TCHRD, began with introducing the book, with the English title of 'Ancestor's Tomb'. The TCHRD received a manuscript from Tibet with a request of anonymity by a Tibetan teacher who wrote the book after his mother's death describing the torture she succumbed to under Chinese brutality and imprisonment.

The book is available in Tibetan and Chinese and the English version is being released in September. Torture is the brutal and barbaric assertion of the state's raw, unrestrained power which renders its victim completely helpless, dehumanising him with humiliation and pain.

Dawa Tsering, a field officer at TCHRD, shared his experiences as a political prisoner in Tibet. Chinese military and paramilitary forces in Tiber 'disappear' Tibetans who demand freedom and human rights, they are secretly and sometimes illegally detained and debilitated during interrogation. In these detention facilities, they're brutalised with rifles and electric batons, electrocuted and kept in solitary confinement for months. These atrocities not only break their spirit but cause the body permanent and irreparable damage and loss which end in death more often than not.

John Gaudette, a legal intern at TCHRD, spoke about the international legal prohibition of torture. No legal act, except slavery has been prohibited as unanimously as torture. The international community recognises that the prohibition of torture is a jus cogens norm, a preemptory norm of international law from which no derogation is permitted. China as a state party to Convention Against Torture (CAT) is oblidged to prevent torture and severely punish the offenders and yet, it's policies, although in existence are superficial and torture remains unchecked.

China refuses to recognize the competence of CAT or work with the sub-committee on prevention, thus preventing the international community from eradicating torture. Cat aims to eradicate torture in China for which the international community has to engage in a diplomatic dialogue with China, independently and at its upcoming Universal Periodic Review in October at the UN, to meet its international obligations and abolish all forms of extra-judicial detentions, close its black sites and allow international observers to ensure torture being abolished in its entirety throughout the People's republic of China.