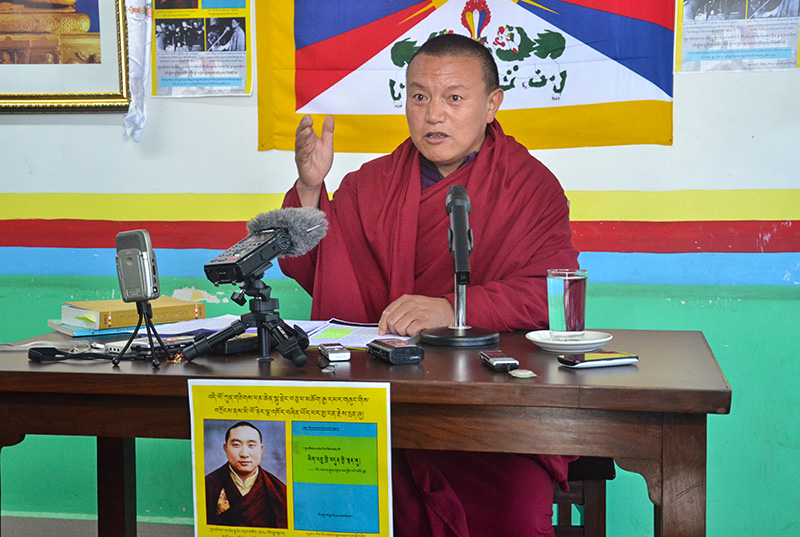 Dharamshala: - Ven Bagdro held a news conference on Tuesday, 28 January to speak about the life, achievements, and death of the late Panchen Lama. The Tibetan former political prisoner has accused Chinese leaders of masterminding the death of the 10th Panchen Lama, who passed away in January 1989 at the age of 51.

"The Panchen Lama died of poisoning. Former Chinese president Hu Jintao and former Chinese premier Wen Jiabao were behind the plot to murder him," said Mr Bagdro at the press conference in McLeod Ganj, India.

Ven Bagdro believes Chinese governmental elites such as Hu Jintao and Wen Jiabao planned and executed a scheme to eliminate Panchen Rinpoche, who passed away in Tashi Lhunpo monastery on the morning of 28 January, 1989.

Ven Bagdro echoed the sentiments of authors Yuan Hongbing and Nam Loyak, who noted, "The killing of the 10th Panchen Rinpoche by elite leaders of the Communist China not only symbolises the taking away of freedom of thought of Chinese citizens and of Tibetan people, but also is a crime intended to eradicate Tibetan Buddhism." The speaker therefore emphasized the impact of the Lama's death as another form of Chinese oppression against Tibetans.

The Communist Chinese regime began to look with disfavor upon Panchen Rinpoche as he sought to bring the oppression of the Tibetan Buddhists to light. Mr Bagdro reminded the crowd of Tibet after it had been invaded by China in 1949, and how the Lama "was a witness to the series of calamities that befell his own people."

As a result, Panchen Rinpoche began a mission to record and share the brutality Tibetans faced at the hands of the Chinese government. He wrote his observations into what became known – after it was translated into Chinese – as the 'Seventy Thousand Character Petition.' He submitted this document to the CCP's leadership, Zhou Enlai and Mao Zedong. These leaders rejected the writing, as Zedong reportedly declared, "I think the Panchen Lama does not have what it takes to be a leader of People," and then continued, "Now the Panchen Lama is positioning his tail up as high as if it were to reach the planes in the sky!"

The immediate backlash the Tibetan teacher faced was formidable. It included propaganda rallies full of drums and banners denouncing him, a public denunciation before thousands of observers at Beijing Nationalities University, and a stint during which he was held in captivity by the Security Bureau of China. Mr Bagdro mentioned one particularly brutal punishment: "One night in the month of August 1966, a group of Chinese soldiers tied Panchen Rinpoche's limbs with iron wires. Thus immovable, they tortured him extensively."

Despite these terrible experiences, the 10th Panchen Lama continued to struggle for the Tibetan People upon his release, which Ven Bagdro argued led to his eventual assassination.