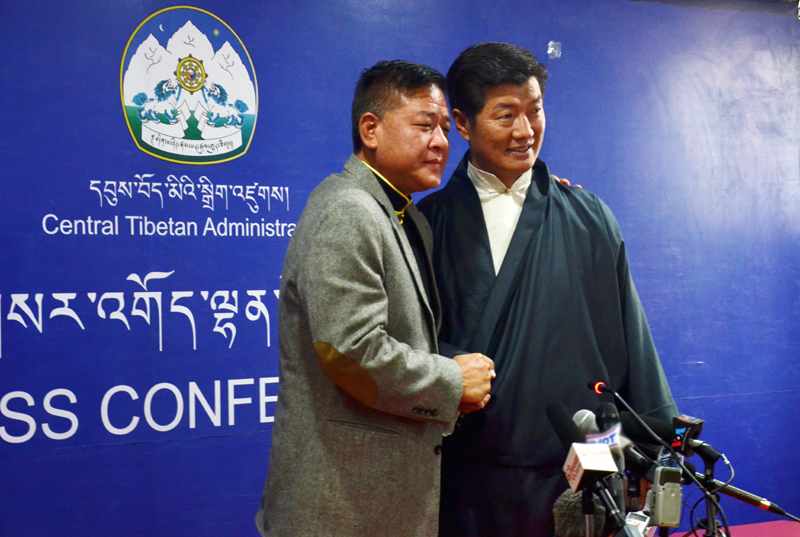 Dharamshala — Reaffirming their commitment to ensure unity and harmony amongst Tibetans inside and outside Tibet, the two final candidates vying for the post of Sikyong 2016, have expressed their deepest apologies to His Holiness the Dalai Lama and asked for forgiveness over recent declining moral values among Tibetans while engaging in the election processes.

The two candidates for Sikyong 2016: Incumbent sikyong Dr Lobsang Sangay and current Speaker of the Speaker of the Parliament in-Exile Mr Penpa Tsering Thursday held a joint press conference at Lhakpa Tsering Memory Hall in Dharamshala, where they expressed regret and apologies to the Tibetans inside Tibet if the recent events have caused disappointment and sorrow.

Speaking at the press conference, Mr Tsering said that "His Holiness the Dalai Lama has expressed concern on the declining morality of Tibetans during the centenary celebration of Mentseekhang on 23 March. Similarly, the state oracle Nechung and Tsering Chenga issued an advisory recently, admonishing the election-related activities of the two candidates and their supporters which had a tone of regionalism and groupism, thus causing deep sorrow to His Holiness the Dalai Lama."

"Therefore, I offer my profound apology to His Holiness the Dalai Lama for the same," Mr Tsering told reporters gathered at the headquarters of the Central Tibetan Administration. He also appealed the public with folded hands to stop all election-related negative activities which are causing serious distress and disunity. "Whatever has happened in the lead-up to the election has already happened. We can't change it anymore. What we can do now is think of the future," he said.

Mr Tsering also added that 'there are no personal grudges or differences between the two final candidates and called on the public to do the same and exert concerted effort to achieve harmony in the entire community'.

"Now that the election is over, we urge you to stop all election-related negative activities. It is your democratic right to support your preferred candidate during the election. However, now we should stop leveling baseless allegations including editing the Nechung oracle video to disrepute people. It is unfortunate that we couldn't leave even the gods and oracles out of this," he said, urging once again to his supporters to shut down the various chat groups on social media and elsewhere.

Dr Lobsang Sangay during the joint press conference, with a deep sense of regret called for a strong unity amongst Tibetans and urged everyone to cease all election-related negative activities to reaffirm harmony and fulfill the vision of His Holiness the Dalai Lama.

"As per the recent advisory of the oracles, there is a strong need for unity and guarantee of faith in the community. When there is unity and bonding, our collective merit increases, which has a parallel impact on His Holiness the Dalai Lama's lifespan. Therefore, as I have said before, it is of extreme importance that we maintain our unity and the sacred bond of affection for all," Dr Sangay said.

"The election is over now. I agree, that in the lead up to the election, there were a few unfortunate instances, which have caused sadness among the public. For that, I offer my sincere apologies."

Sikyong also promised vigorous health and welfare measures to uplift the poorer section of the Tibetan community. "According extreme importance to His Holiness the Dalai Lama's advice, we are formulating a series of programs in health and poverty reduction to create a robust and vibrant Tibetan community. The next Kashag would implement it in earnest," he said.

"Therefore, I promise that I would do my best to fulfill the aspirations and vision of His Holiness the Dalai Lama and urge the public to do the same," he said.

Sikyong further called on the public, particularly his own supporters, to stop the division of the Tibetan community along the lines of regions and groups out of a warped sense of loyalty, and work rather for a better future of the Tibetans inside and outside Tibet.

The two 2016 Sikyong candidates also expressed regret and apologies to the Tibetans inside Tibet if the recent events have caused disappointment and sorrow. They both have shown themselves responsible with a strong sense of friendship throughout the press conference, by shaking their hands and smiling, appears to be what has caught the Tibetan media attention.

The apology came after His Holiness the Dalai Lama expressed deep concern about the declining moral values among the Tibetans. "We speak about good moral character and behavior, but in reality, these are degenerating in our society," he said.

"We need to be practical. Feel-good appearances will not help. That will be empty glory. "We have sustained thus far. To think that it will be alright in the future as well will be wrong," His Holiness said, adding: "You have to take responsibility and be careful, and try to stop where things are going wrong."

The PTI new service reported that the first directly elected Kalong Tripa, Professor Samdhong Rinpoche did not vote in the Tibetan general election as he felt disappointed by the adversarial campaigning of the candidates. He told the Indian newspaper that he boycotted the election process because that the elections were not fought on "Tibetan ethics".

The newspaper further quoted Rinpoche as saying: "The next generations of Tibetans, however, must know that the exiled set-up, which was founded in April 1959, was based on the principles of co-operation and not of competition. The practices being adopted by our contenders now are the same as regular political parties. These are not going to benefit in any way."