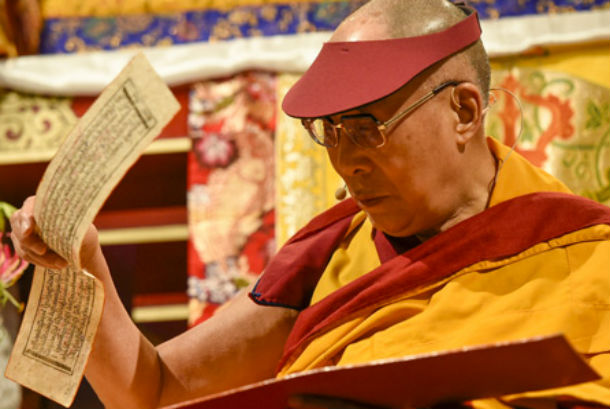 Dharamsala, HP, India — Concluding teachings on "Je Tsongkhapa's Three Principle Paths" (Lamtso Namsum) given at the request of Chinese disciples, His Holiness the Dalai Lama culminated the three day (April 3rd 2015) with a Yamantaka Initiation, blessings and future guidance to the gathering of devotees.

"The three day teaching given at the request of a group of Chinese devotees, mainly from mainland China," Mr Jamyang Rinchen- Tibetan-Chinese translator for His Holiness the Dalai Lama since 1996 told Tibet Post International on Sunday.

Addressing more than 400 Chinese devotees from China, Taiwan, Singapore and Hong kong, His Holiness urged them to study Buddhist teachings.

The gathering, which included over 300 Buddhists from mainland China, listened to the revered spiritual leader, who had inspired and engaged with the audience for three inspirational days at his residence in Dharamsala, HP, India on May 1-3, 2015.

"His Holiness reiterated his wish for pilgrimage to China's sacred Mt Wutai," a mountain considered to be a Buddhist sacred place by Chinese and Tibetans. Mr Rinchen said "His Holiness' remark drew applause from the Chinese visitors and many had tears in their eyes."

According to Mr Rinchen, "this is the fourth time for Chinese Buddhist followers that His Holiness the Dalai Lama has given Buddhist teachings at his residence in Dharamshala."

During the teaching, the Tibetan spiritual leader also told the devotees that Tibetan Buddhism is not "Lamaism," but a true "lineage of the Nalanda tradition," which is largely derived from Nagarjuna. Suggestions about Lamaism are based on "misunderstandings."

His Holiness also spoke about the mutual respect, friendship and harmony between the four existing schools of Tibetan Buddhism. He said 'this will remain strong.'